Putin and Obama: The Staged Wrestling Match of the World! |. 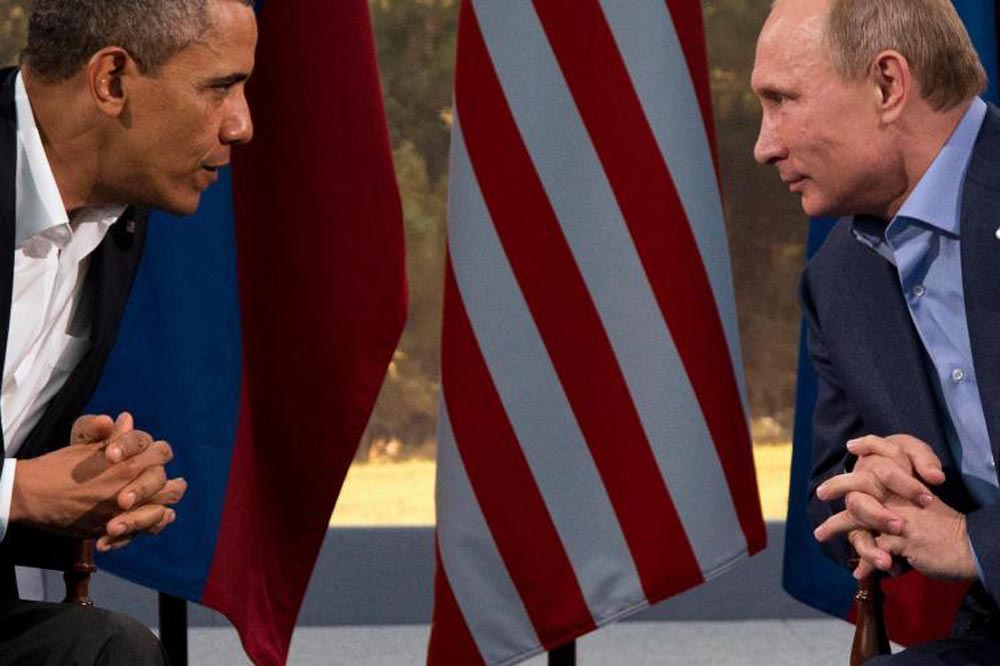 Putin and Obama: The Staged Wrestling Match of the World!

William Shakespeare once wrote, “All the world’s a stage”. Words can never ring more true than where we are at today.

In the NWO black and white, West corner of the ring, we have the 6 foot 2 inch tall Manchurian Candidate, Barry Soetoro, the illegal, narcissistic, foreign, homosexual, Communist rat from Kenya, weighing at a tiny 165 pounds, with a 13 ½ shoe size and afraid to break a nail, swaggers in a third world, cocky way and who cannot say anything without his teleprompter and is more than happy to take credit for something good, but runs away like a sissy and searches for a scapegoat when something falls apart.

In the NWO red and black, East corner, we have the 5ft 5 inch tall (give or take) Grandmaster Chess player, Putin, the psychopathic, KGB, Black belt Judo, Communist bear himself from St. Petersburg, Russia, weighing around 215 pounds, shoe size unknown and is not afraid to get his hands dirty in or out of the ring, swaggers in a professional cocky way, doesn’t need a teleprompter, displays a cold emotionless face and shoots the scapegoat, whether something good or bad happens.

It’s Obama, the new Hitler VS Putin, the new Stalin!

Both are competing for the World Heavyweight Title, while the Western controlled Rockefellers and the Eastern controlled Rothschilds are taking bets in the background and throwing the stats on display for the International Wall Street Bankers. Both are watching the fans in order to decide, based on popular support, who will be the official good guy and who will be the official bad guy.

While all of this is going on, Hollywood celebrities make a special guest appearance alongside mainstream media reporters as ringside commentary announcers, reading from a script, and creating propaganda, while using their acting skills to constantly sway and indoctrinate public opinion and support for the two wrestlers based on the audience’s reaction.

The stage crew are checking, double-checking and even triple-checking to make sure all the props, lighting and pyrotechnic special effects are ready for the all out match tobegin, so that nothing falls apart before, during or even after the event has taken place. If the stage or event begins to fall apart, they know that they must work overtime to do all they can to ensure that the show must go on by implementing plan B, C, D, or even E, knowing very well that they will be creating and patching up countless loopholes for the audience, while the ringside announcers assist in their cover-ups by creating massive psychological disinformation campaigns to try and fool the crowds.

DHS and Nazi-like security officers are everywhere, guarding each post, exit, entrance, and gated area on one side while the Communist Bolsheviks are on the other, to ensure the safety of the announcers and the puppets on stage. If one of the people in the crowd attempts to hop over the fence, they will be met with the sheer force of a hundred police state goons, who will stop at nothing until that person is either beaten to a pulp, tased or shot to death, as he or she is being dragged out of the arena and onto the street. Once they return, the head of security will tell everyone that the violence was justified and any question on the matter will violate National Event Security.

No longer do the people of the world care about their false governments, consisting of Congress, Parliament and the like, battling it out for the Intercontinental Title, as none of it matters. These tiny, pathetic, political wrestling figures are mere lower class puppets, trying to gain attention from the crowd, ringside announcers and anyone else who will finance their career, promote them, and pay for their new costume, campaign theme gimmick and entrapping music, along with their special occult entrances that will make them appear larger than they really are.

Let’s not forget about the attractive, mind-controlled, Illuminati, witchcraft whores like Katy Perry, Kim Kardashian, Lady Gaga and more, who wear exotic, skimpy-looking, trashy outfits to hypnotize the males in the crowd by sucking them in a trance and making them lust and obsess over them, while the Hollywood celebrities and mainstream media ringside announcers only further demoralize the crowd and encourage their degradation into a child-like demeanor by making obnoxious comments saying, “Oh boy, look at those puppies. What I wouldn’t give to have those things in my bed at night” or “she looks like a man, but that’s okay with me”. They even go further in desensitizing the public by encouraging the females in the crowd to join in on the action in order to try and incite homosexual behavior.

The air in the world arena is filled with chem-trails, radiation, smokescreens, and drones. The stage crew and production are lining up for their tight, close-up shots, while security towers and surveillance cameras are everywhere, rotating up and down, left and right, catching and recording the crowds’ emotions and storing them in their database for future evaluation.

The match is about to begin and the crowd, some suffering from mind-controlled drugs, while others are awakening, is in a delirious state of psychological fear, anxiety, and stress, yet with a hint of excitement that the event or something along those lines is without a doubt, finally starting to commence. No one knows which wrestler will come out the victor, despite knowing the fact that it is all rigged and doesn’t even matter. Many don’t even care at this point, as it is all coming to a head.

Everyone has finished prepping and everything is up for grabs, the fences and gates around the world are now rattling, the International Wall Street Bankers are jumping 20 stories off the rafters, the National Event Security is in full riot and military gear, with MRAP vehicles waiting alongside the wings of the world arena. No one knows who is armed and who is not, as there is no way to be sure and no one is willing to move a foot or an inch to find out. It may even go nuclear!

The head Zionist announcer walks into the ring, takes the mike which is magically coming down from the sky and with one final set of words, says in an evil, yet powerful, god-like voice, for all the world to hear, “Ladies and gentlemen of the world, Lllleeeeeeetttt’s get ready to RUMBLEEEEEE!!!!!!!!!!……………..”