Earlier this week, I reported on how ex-NYC Mayor and Billionaire Michael Bloomberg is starting up a new $50 million anti-gun group with all new propaganda and the intent to get a million voters to the polls in pro-2nd Amendment states like Texas. (I wonder how much votes are going for these days, anyway?)

The magical endeavor is to be called, “Everytown for Gun Safety”. Cute, huh?

Well, before Bloomberg and his new club could nab the official Facebook page thus named, a pro-gun group grabbed it first: 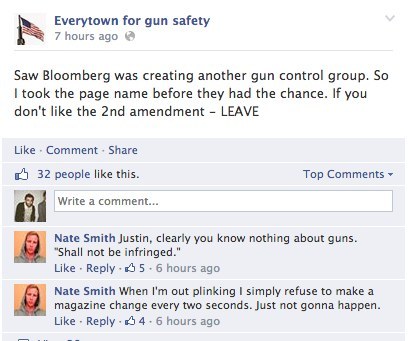 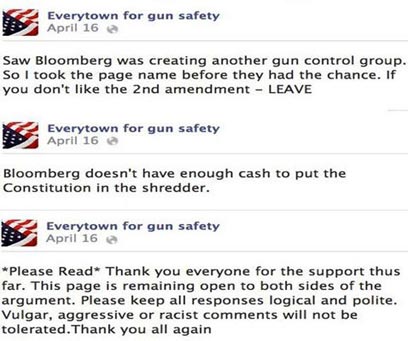 This was the new page’s profile picture: 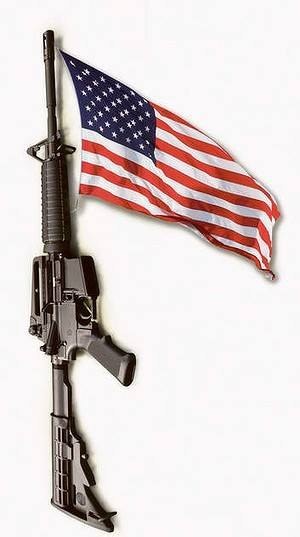 I’m writing “was” because it has already been taken down.

Well that didn’t take long. Facebook has pulled the plug on the page Everytown for Gun Safety. You may recall that pro-gun forces assumed control of the page last week, after Mayor Bloomberg launched his Everytown for Gun Safety anti-NRA lobby group. The Mayor’s majordomo laughed off the missing link, challenging the page’s [temporary] owners to a duel. While we expected the billionaire anti-ballistics bully boys to prevail, what with trademark lawyers parachuting in to rectify the oversight, we didn’t expect the Everytown page to last long. It didn’t. However . . . there are now dozens of local Everytown for Gun Safety pages run by gun rights advocates. All of which are still on-line. For now.

Bloomberg’s pals did actually challenge the pro-gunners, which they called “cybersquatters”, to a duel:

“Maybe they’d like to duel for it,” said Mark Glaze, the executive director of Everytown for Gun Safety. “I hear every person on our staff of 85 is a better shot than Wayne LaPierre. Or maybe a bidding war!”

On a serious note, Glaze said they are in the process of acquiring trademark protection.

“Once that happens, we expect Facebook to shoo these cybersquattters politely off this name/page,” he said.

So it isn’t over a trademark either, as one commenter pointed out:

Nope, no announcement has been made on exactly what rule the group broke by putting up the page (unless “pissing off the establishment and its agenda” is an official FB no-no)…but if Facebook is anything like our public schools in this country, displaying pictures of guns and American flags are a surefire way to get instantly censored.