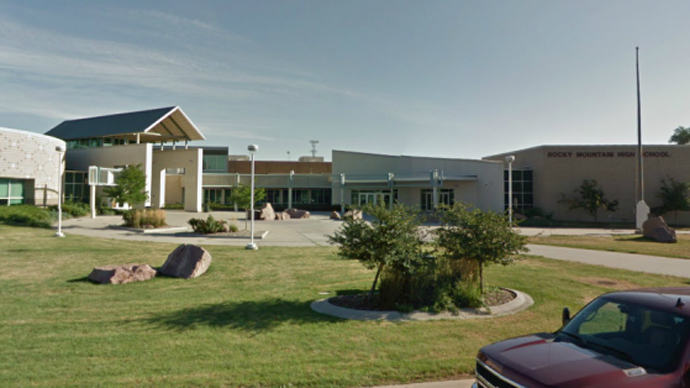 Rocky Mountain High School, Colorado (Image from 999thepoint.com)
Florida conservatives, evidently alarmed by changing social and income demographics, are pushing legislation to combat what they say is the attempted indoctrination of American students with Islamic ideology.
Lawmakers are currently considering a so-called “anti-Sharia bill” which passed through the state Senate with a 24-14 vote on Monday. Sharia, which varies between cultures, is the basic path which devout Muslims try to follow. The rules, while strict by Western standards, often stretch past the confines of a mosque and regulate aspects of secular law, including crime, public policy, sex, diet, and economics.
“Those people who want to come to America, we welcome them, but when you come to America, you are going to be governed under American laws, when you come to Florida you are going to be governed by Florida laws, and we ought not to apologize for that,” Sen. Alan Hays, a Republican, told the Orlando Sentinel after the bill passed through the state Senate.
While the bill will now move to the state House of Representatives for approval, members of the Senate were still wondering who, exactly, is trying to impose Islamic restrictions on the mostly Christian Florida population. According to a recent analysis from the Pew Research Center, a mere one percent of Florida’s population is Muslim, compared to the 66 percent of Floridians who practice some form of Christianity.
“There is no record of Sharia law being implemented in the courts of Florida or any other state,” Sen. Eleanor Sobel, a Democrat who opposed the bill, told the Sentinel.
Officials were similarly confused when educators, in an apparent attempt to break down cultural barriers, came under attack from members of their community who were trying to do the opposite.
A controversy erupted in Volusia County, Florida in November when a student brought her social studies textbook home to her parents, who found that the curriculum dedicated a specific section to the history and beliefs of Islam. Experts told the Daytona News Journal that the rest of the book was full of references to Christianity and Judaism, but the first complaint blossomed into a contingency of parents who felt that their rights were somehow being infringed upon.
“We hope that the School Board will respect our voices in the process of education and reject voices of intolerance and censorship,” a petition calling on administrators to replace the book read. The document failed to explain how an education based on the knowledge of various religions equated to censorship.
Conservatives in Colorado were equally upset when a Muslim student led the rest of the school in the Pledge of Allegiance while replacing the traditional “under God” with “under Allah.” The pledge was adopted in US schools in 1942 at the height of World War II but was only amended to include “under God” a decade later, as a way for Americans to differentiate themselves from the Soviet Union’s atheism policy during the Cold War.
Colorado’s Cultural Arms Club, which advertises its mission to “destroy the barriers, embrace the cultures” that exist throughout the region, organized the “under Allah” pledge at Rocky Mountain High School. It quickly came under fire from parents who felt that it would be unpatriotic to utter the pledge in any form other than the traditional one.
“These students love this country,” school principal Tom Lopez told Fox News at the time. “They were not being un-American in trying to do this. They believed they were accentuating the meaning of the words as spoken regularly in English.”
The problem, Lopez said, was not that the school was trying to be more inclusive, but that a vocal fraction of the community was so up in arms.
“I’ve been shocked with prejudicial statements that have been made,” he continued. “I’ve been shocked with the lack of seeking understanding. There’s definitely some suspicion and fear expressed in these people’s minds. There’s some hate,” he said.
Like Principal Lopez, a growing number of pundits and lawmakers have called for more information on Islamic culture and beliefs. Even now, more than a decade after religious tension heightened in the wake of the September 11, 2001 terror attacks, nearly two-thirds of Americans asked about other world faiths admitted they had “little or no knowledge” about what Muslims believe, according to New York University professor Jonathan Zimmerman.
“To live together as citizens of a nation, we need to understand each other’s fundamental assumptions and beliefs about the world,” Zimmerman wrote in the New York Daily News. “And we can’t do that without understanding religion, which remains the basic wellspring of those beliefs for many of us.”
Delivered by The Daily Sheeple

Contributed by RT of RT.com.