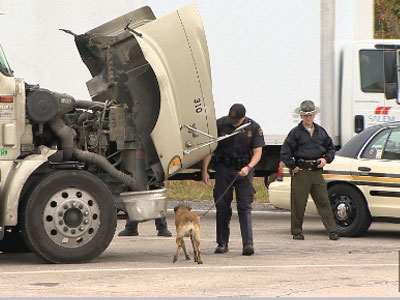 Maybe a child safety seat would be a great place to stash-your-cash while traveling!
As you plan for your summer travels we all need to be on the look out for VIPR’s, I’m not talking about the car, but rather a program developed by the Department of Homeland Security, and deployed at the state level. Tennessee was the first state to experiment with this new form of tyranny. VIPR’s patrol the interstates looking for “terrorist”. That’s right, “terrorist”. With so much evidence supporting the possibility of a terrorist attack on US interstates this program should have been rolled out when the first interstate was built. It seems like every week I read a report about another “terrorist” attack being instigated from one of the major interstates that criss-cross our once proud Republic. Let’s not forget that a viper is also another word for snake. According to Merriam-Webster dictionary the word viper is defined as – a limbless reptile with a long body [a viper sliding silently through the field]. Sounds about right to me.
I am sure a lot of you have read articles regarding how local and state police just randomly stop people while traveling down the freeway. If you happen to be carrying a large amount of cash, you know to make a legitimate purchase or you simply like having a lot of cash, you will need to hide it really well. Another story of a law abiding citizen having there cash stolen by the police state has recently surfaced. These dirtbags are getting more brazen all the time. Let’s not forget the police are here to “protect and serve”. No one ever said who they were protecting and serving. As time goes by the picture is getting quiet clear who is being protected and served, and it ain’t us.

Tan Nguyen was the lucky gambler who was stopped along I-80 in Humboldt County. Nguyen was stopped by Deputy Lee Dove for only going 3 miles per hour above the posted speed limit.

To establish the grounds for searching Nguyen’s vehicle, the deputy began to claim that he smelled drugs.
“I just smelled weed. I know I did. I know I smelled weed,” said Dove in the dash-cam video available from KLAS-TV.
Deputy Dove is a skilled narcotics agent that knows that accusing someone of drug trafficking is all that is required to walk away with their money and property. The policy that enables him to do this is known as civil asset forfeiture. “How much money you got?” asks the deputy.

What stands out to me, are the words “began” and “just”. What is this so-called “skilled narcotics agent” talking about? When did he “begin” to “just” smell weed? Right before stopping at the doughnut shop or immediately after leaving? Can you say, bullshit? I knew you could. What this establishes is the fact that you and I are wards of the state. We have no rights and the people that are suppose to represent the law are establishing themselves as being above the law. In case after case it is shown that motorist are like an ATM machine for the state.
NewsChannel5.com | Nashville News, Weather
You feel you have been wronged and the state simply stole your money? Well, good luck getting your money back. According to a report from Infowars.com, you may need an attorney:

There’s a state law in Tennessee that allows police to keep large amounts of cash from routine stops if they suspect it’s going to be used for drug trafficking. If the money’s owner doesn’t seek legal recourse to get their money back, the agency gets to keep it.

I suspect our Founding Fathers are either rolling in theirs graves or crying for the loss of their Republic. When will the people rise up and say no more? When a state writes into law they can steal your cash, based on nothing, the control mechanism has been greatly enhanced.
Stash your cash when going to make that legitimate large purchase and happy motoring!
Delivered by The Daily Sheeple

Contributed by Rory Hall of The Daily Coin.
As a daily contributor at SGTReport.com. for the past two years I have written a several original articles and interviewed some of the top precious metals professionals in the industry, as well as top preparedness specialists in the world. YouTube Channel, The Daily Coin, was launched in February 2014 and website TheDailyCoin.org was launched April 25, 2014. As a student of monetary, financial and economic history for the past five years it has taught me to watch the markets with an open mind and a hand on my wallet.
Also, built and maintained Rory’s Glass (Eyes of the Heart Glassworks) – now closed to the public.