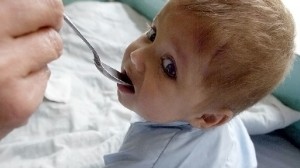 AFP Photo / Roslan Rahman
Researchers at the Centers for Disease Control and Prevention have found that doctors are prescribing attention deficit hyperactivity disorder medication to more than 10,000 American toddlers between the ages of two and three.
According to a report by the New York Times, these prescriptions are being granted despite the fact that the American Academy of Pediatrics does not even broach the subject of ADHD medication in children. In fact, the guidelines are notably absent regarding ADHD in children under four years old in general, due to the difficulty of diagnosing the disorder.

Without taking the time to properly observe and determine whether a toddler has ADHD, doctors could be offering children dangerous prescriptions that will affect them for the rest of their lives.

“People prescribing to 2-year-olds are just winging it. It is outside the standard of care, and they should be subject to malpractice if something goes wrong with a kid,” said behavioral pediatrician Dr. Lawrence Diller to the Times.

During their study, researchers at the CDC assembled data from Medicaid claims in Georgia as well as claims from the research firm MarketScan. By applying the state’s rates of medication in toddlers aged two and three – typically considered to match up with rates around the US – the agency’s Susanna Visser was able to estimate the number of medicated infants across the country.

“If we applied Georgia’s rate to the number of toddlers on Medicaid nationwide, we would expect at least 10,000 of those to be on ADHD medication,” Visser told the Times.

If the information from MarketScan was also applied, that number would jump by another 4,000.
Some of the drugs used include Adderall and methylphenidate (Ritalin), but only Adderral has been approved by the FDA for children under six years of age. Use of methylphenidate could be linked to some studies showing its potential on younger children, but it is still not authorized for kids under age four by the American Academy of Pediatrics.

“Under six years old, you give a child a medication, they are exquisitely sensitive to medications so they may be more likely have irritability, trouble sleeping and you’re not addressing the difficulty of a child concentrating,” Rappaport said to WBZ.

Even doctors who said they could understand why a small number of children would be prescribed ADHD medication stated that adjusting home life should be the first priority. The sheer number of young children on medication suggests, however, that many doctors and parents are looking to take the easy way out.

“Some of these kids are having really legitimate problems,” Dr. Doris Greenberg told the Times. “But you also have overwhelmed parents who can’t cope and the doctor prescribes as a knee-jerk reaction. You have children with depression or anxiety who can present the same way, and these medications can just make those problems worse.”

This isn’t the first time that ADHD treatment has come under scrutiny. As RT reported late last year, the authors of the primary study promoting medication over behaviorally therapy now have serious reservations about their initial findings. While medication is proven to be cheaper than therapy – which is not always sufficiently covered by insurers – it can also produce side effects such as anxiety, depression, insomnia, and even addiction.

“I hope it didn’t do irreparable damage,” said one of the study’s co-authors, Dr. Lilly Hechtman of Montreal’s McGill University.“The people who pay the price in the end is the kids. That’s the biggest tragedy in all of this.”

Contributed by Contributing Author of RT.