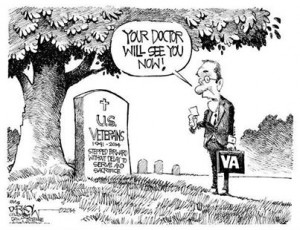 By Richard Anthony
Like all of you, I am watching the latest scandal unfold about the Veterans Administration. Am I surprised? No, but what insults my intelligence is the president saying that the situation is “unacceptable.” Really? Once again, our president is looking right into the face of the American people and L-Y-I-N-G! Obama knew about the problems with the VA when he took office. Those same problems continued to present themselves during the first four years of his presidency, and all the while he knew about them.
It is obvious that Obama doesn’t give a tinkers dam about what happens to veterans. If he did, these problems would have been taken care of four or five years ago. Instead, he focused on Obamacare, his baby, his signature piece of legislation, which was going to insure not only his legacy, but a place in American history. Well, just like everything else this man has done, problems with the VA are only a small part of a long list of screw-ups.
I am only one of a long list of veterans, who have had bad experiences dealing with the VA. I’ll let you in on something. VA employees can say or do anything they want. They can insult you, they can call you names, they can curse at you, they can even threaten you with physical harm, and there’s not a thing that you can do about it.
Here’s why; the union! VA employees are part of one of the single most powerful unions in this country. As you have seen while watching the news, not even an act of congress is enough to get a VA employee fired. Maybe if a VA employee was caught red-handed murdering a patient, and they were caught on camera committing the alleged murder, it would still literally take an act of God to get them fired (and that’s only “maybe”).
I have personally experienced all of the things (except the “murder” part) that I just mentioned. As a patient of the VA, don’t you dare say anything remotely offensive, or in a raised voice, because then they put what is known as a “Red Flag” on your records. A “Red Flag” denotes you as a “violent,” possibly dangerous, person.
What happens then, is that every time you have an appointment, prior to being seen by VA personnel, a VA police officer is called (these are ARMED federal Police mind you), and before you are seen, the officer places himself right outside the office/ treatment room. So much for “Patient Confidentiality,” huh? If he feels you are about to harm the VA employee, he has the legal right to burst in the room/office and shoot you dead! That is a stone cold, solid fact – absolutely no exaggeration folks!
How do I know this? Simple, I have a “Red Flag” on my records, even though I have never, ever threatened, or ever physically harmed a VA employee. Why do I have a “Red Flag” you may ask? I dared tell a VA doctor he was an “A-hole.” That was 10 years ago, and the Red Flag is still on my records.
It was the VA that diagnosed me with PTSD many years ago and I have never received one single dime in disability from them.
Now, don’t get me wrong. I appreciate what they do and there are a few kind, decent people who work there, but more often than not, too many VA employees seem to have forgotten that if it weren’t for guys like me, they wouldn’t even have a job. A VA employee can say and get away with things that would otherwise, not only get them fired if they were working for a civilian medical facility, but possibly land them in jail and get the hospital sued. But you can’t sue the VA (nice huh?). That’s “job security” on steroids.
I have never told anyone the things I have just told you about my experiences with the VAMC. The main reason is because nothing would ever get done about it and that’s the truth. As other veterans can attest to, I’m sure they have experienced far worse things than I have.
That’s what we veterans get for serving our nation faithfully.  ”Shut up….sit down…. take a number and maybe we’ll see you before you die.”
Ladies and Gentlemen, if you want to hear something really scary. That’s what the future of medicine in the U.S. is headed towards in the next ten years if Obamacare is not repealed.
Delivered by The Daily Sheeple

Contributed by Freedom Outpost of www.FreedomOutpost.com.