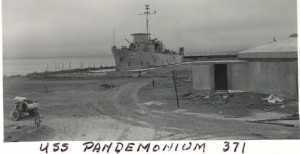 Sailors would scrub ship doused with radiation for decontamination training.

The US Navy has announced it will soon give its “final” assessment on whether land they plan to sell to the City of San Francisco for development is still contaminated with radiation.

Since 1993, the Navy has attempted to convince the city to buy back Treasure Island, a decommissioned naval base located in San Francisco Bay. Once acquired, the city can sell the land to developers who have long envisioned building a $1.5 billion, 20,000 resident high-rise community.

“It’s going to be one of the premiere addresses in San Francisco,” the Director of the Treasure Island Development Authority says prospectively.

But before the Navy can unload the property, it has to prove the island’s safety to city and state health departments.

The problem is this will be the Navy’s second “final” assessment, after a 2006 investigation conducted by an independent contractor failed to turn up various radiological hot spots.

And the Navy’s cleanup efforts have done little if any good, with many alleging they’ve actually done more to widen the spread of contamination.

Treasure Island has a serious radiological history. The 403-acre piece of real estate was constructed to house the 1939 Golden Gate International Exposition, but was seized in 1942 by the Navy for the war effort.

The site served to train Navy personnel for radiological operations as early as 1947, and berthed ships the Navy swears were surveyed and decontaminated at other shipyards. However, a mock ship, the USS Pandemonium, used for decontamination training remained continually docked there.

“Decontamination involved spraying and scrubbing the surfaces of the mockup with water and detergent to wash away the radioactive contamination,” the 2006 assessment states, insisting that only short-lived isotopes were used for training.

In 1950, radium spilled inside one of the facility’s labs. The report noted the failure to properly quarantine: “Since many of the occupants of Building 233 left the building before the extent of the spill was fully identified, radioactive contamination was carried by personnel (on shoes, clothing etc) to personal automobiles and personal residences.” Newspapers at the time also described “traces of radium” “were tracked into homes widely scattered throughout the bay areas.”

Cleanup consisted of radioactive waste being loaded into 200 barrels and dumped off the coast “weighted with concrete and.. sunk at sea at a depth of more than 100 fathoms.”

The 2006 report, entitled “Final Treasure Island Naval Station Historical Radiological Assessment,” is now, however, regarded as largely erroneous after contractors hired by the Navy continued turning up radiation in areas that were supposed to be safe.

“One civilian cleanup worker was ordered off the job with pay after being exposed to the maximum radiation dosage allowed under Nuclear Regulatory Commission guidelines, Sullivan, the Navy environmental cleanup coordinator, acknowledged,” reported Matt Smith for the Bay Citizen.

Further investigation revealed Treasure Island to have a larger radiological history than previously disclosed. “It included a repair shop for gun sights, which sometimes contained glowing markers made of radioactive elements,” Smith wrote. Also, “Researchers found indications that ships that berthed there could have been contaminated with radiation from Pacific nuclear bomb tests.” The report also neglected to mention the facility housed a “counting room,” suggesting the Navy suspected contamination of personnel and equipment.

The Navy came under further scrutiny in 2010, after a state public health official alleged that “Navy contractors had dug up and hauled off 16,000 cubic yards of contaminated dirt, some with radiation levels 400 times the Environmental Protection Agency’s human exposure limits for topsoil.” “And worse,” notes Zero Hedge, “radioactive material in the soil around those excavations exposed children at a Boys & Girls Club and a child development center to contaminated dust.”

In 2011, the state health department’s radiological health enforcement specialist issued the Navy and its cleanup contractor a violation notice, accusing them of “repeatedly digging, piling, spreading and transporting dirt from sites contaminated with toxic chemicals” without proper testing, “potentially spreading radiation beyond its original location,” according to Smith. 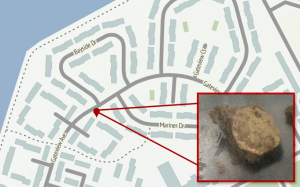 Despite cleanup efforts, radioactive debris has been discovered as early as last year. A report filed by the state Public Health Department revealed radioactive shards were found in people’s lawns and “could represent a hazard to children.”

“One small octagonal object was so hot that holding onto it for an hour could cause radiation burns, hair loss and possible ulceration, according to the memo,” Matt Smith reported. “Regulators have speculated that the shards might have been buried in the soil decades ago to train sailors to use Geiger counters, which measure radiation.”

Some of the island’s 2,000 residents say the Navy knowingly misled them. “They should have been more open and upfront, because there would have been people who would have chosen not to live here,” one former resident told the Bay Citizen.

Other island inhabitants maintain living there made them sick. From the East Bay Express:

According to [former resident Brenna] Summers, her sister Misty, who was seven when their family came to Treasure Island, had an emergency hysterectomy at age eighteen to remove a pre-cancerous mass from her uterus, fallopian tubes, and ovaries. Her other sister, Heather, was pregnant while living on the island; Heather’s son was born with birth defects. Summers’ children were later born with birth defects as well. Summers’ mother and sister Misty survived skin cancer; her brother Brian had a pre-cancerous growth removed from his face. Everyone in the family has suffered some form of autoimmune disease. All the pets the family owned or took care of whil
e living on the island — including eight dogs and three cats — died of cancer. With the exception of one cat, all the pets died between the ages of one and six years old.

Another former resident believes radiation is responsible for many of her friends’ cancers and that her own breast cancer was a result of living there:

Needless to say, residents have grown weary of the Navy’s reassurances, but the department continues declaring the island safe.

The Navy expects the latest round of testing will only take up to three months, after which, CBS San Francisco claims, residents will know “for sure if it is safe to stay there.”

Contributed by Adan Salazar of Infowars.