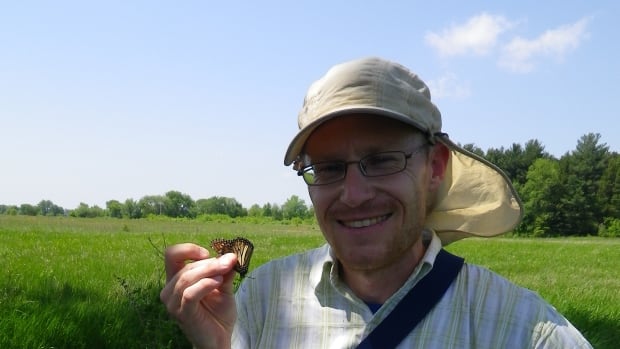 Tyler Flockhart, currently a postdoctoral researcher at the University of Guelph, led the analysis, which combined all the known data about monarch populations and the factors that influence them. (Courtesy Tyler Flockhart)
The main cause of the monarch butterfly’s decline is the loss of milkweed — its food — in its U.S. breeding grounds, a new study has found. That all but confirms that the spread of genetically modified crops is indirectly killing the monarch.
This past winter, the number of monarch butterflies wintering in Mexico fell to its lowest since 1993, when records first started being kept, the World Wildlife Fund and Mexico’s Environment Department reported in January. That report blamed the loss of milkweed owing to genetically modified crops and urban sprawl in the U.S. and illegal logging in the butterflies’ Mexican wintering ground.

Now, an analysis combining all the known data about monarch populations and the factors that influence them shows that the monarch’s biggest threat is in the U.S., not Mexico.
The leaves of the milkweed plant are the only place that monarchs lay their eggs and the only food that monarch butterfly caterpillars will eat. A large proportion of monarchs east of the Rocky Mountains breed in the U.S. corn belt, stretching from Kansas in the west to Ohio in the east, and south to north from Missouri to North Dakota. 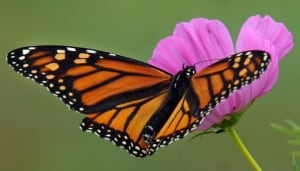 This past winter, monarch butterfly numbers at the wintering grounds in Mexico fell to their lowest levels since records started being kept in 1993. (Associated Press)
The study, published today in the Journal of Animal Ecology, shows this decline in milkweed is the main cause of the monarch’s recent population decline, not deforestation in Mexico. If this milkweed loss continues, the study predicts, monarch populations will fall at least another 14 per cent and there is a five per cent chance they will be driven nearly to extinction over the next century .
Study co-author Ryan Norris, a biology professor at the University of Guelph, said that “likely the biggest cause of loss of milkweed is the adoption of genetically modified crops.”
Farmers have been increasingly planting corn and soybeans resistant to herbicides, and then applying those herbicides liberally on their fields. That kills off plants between the rows of crops that aren’t resistant, such as milkweed.
That’s been a big problem for the butterflies. Even now, 67 per cent of milkweed plants in the butterflies’ breeding grounds are found in “agriculture-intensive landscapes,” the study reported.

There have also been some other causes of milkweed loss, Norris said. Because milkweed is poisonous to humans and to grazing animals, it’s considered a noxious weed in many jurisdictions and is removed as such. Some open areas where milkweed has previously grown have also been reforested in recent decades, wiping out the milkweed. Flockhart added that urbanization has also played a role.
Milkweed is also being lost in other parts of the monarch butterfly’s range, such as southern Ontario. But Flockhart said that has less of an effect because so few monarch butterflies breed there, and most of those that do come from farther south.
The findings suggest that the “top conservation priority to slow or halt future population declines of monarch butterflies in North America,” has to be addressing the milkweed loss in its breeding grounds, the paper said.
“One of the main focus areas has to be planting milkweed in the U.S. Midwest,” Norris said.

Thus far, he added, most monarch conservation efforts have focused on protecting the butterflies’ wintering site in Mexico, where millions of monarchs from all over North America converge each year. But recently, that hasn’t stopped monarch populations from declining.
“Here’s the lesson for any species that crosses international boundaries or any species that moves long distances over the course of its annual cycle,” he said. “You can’t focus on one part of the annual cycle.”

Flockhart said the study shows that a huge quantity of milkweed would need to be replanted in order for monarch butterfly populations to recover. He suggests taking advantage of roadsides for this purpose, and mowing the milkweed at strategic times to maximize their use by monarch butterflies, which prefer younger plants.
Flockhart also wants the plant delisted as a noxious weed in areas where monarchs breed. In Ontario, milkweed was delisted on May 9.
The study represented several years of work over the course of Flockhart’s PhD studies at the University of Guelph. Flockhart designed the study and brought together all the data he could find about monarch butterflies, including information about their range and survival rates at various points in their life cycle. The researchers also tracked monarchs using chemical markers to learn more about their movements.
The data was compiled into a computer model built by Jean-Baptiste Pichancourt at the Commonwealth Scientific and Industrial Research Organization in Brisbane, Australia, in collaboration with University of Queensland researcher Tara Martin. That allowed the researchers to see what would happen to monarch populations when they manipulated different variables. It was funded by NSERC, the Canadian Wildlife Federation, the University of Guelph and CSIRO.
Monarch Butterfly Decline Linked To Spread Of GM Crops
Adan
Thu, 05 Jun 2014 15:32:42 GMT