Protesters wave Palestinian flags during a demonstration on July 23, 2014 in front of the Invalides in Paris, to denounce Israel’s military campaign in Gaza and to show their support to the Palestinian people (AFP Photo / Kenzo Tribouillard)

Thousands of people in Paris and other cities across France have rallied to express their protest against Israel’s military operation in Gaza, which has resulted in over 600 deaths, many of them children, in the space of two weeks.
The rally on Wednesday gathered at least 14,500 people, according to police data, while the organizers of the event claim that about 25,000 people attended the demonstration in France’s capital, reported AFP.
The demonstrators carried Palestinian flags, shouting slogans such as “Israel killer. Hollande resignation” and “Long live Palestine, long live the resistance!” The words “Boycott Israel” were seen on some of the banners.
The rally, which started at Place Denfert-Rochereau in the south of Paris, was organized by various associations including the Left Party (PG), democratic socialist political party and the General Confederation of Labor (CGT), a national trade union center. A man holds a placard reading “From Paris to Gaza, Solidarity”, as protesters take part in a demonstration on July 23, 2014 in front of the Invalides in Paris, to denounce Israel’s military campaign in Gaza and to show their support to the Palestinian people (AFP Photo / Stephane De Sakutin)

Some of the protesters said they also wanted to express their disapproval of their government’s foreign policy, which had failed to take measures against Israel’s violence in Gaza.
“I voted for Hollande and I would never expect this stance from a socialist government. By not standing up to Israel he is legitimizing the massacre of Palestinians,” Mina McCamery, a Paris resident, told The Local.
“France has to be tough against Israel and impose economic and political sanctions. That’s the only way they will listen,” she added.
Israeli Gaza offensive inspires global rallies, Paris protest turns violent
In the meantime, the protesters said the rally was not directed against the Jewish population.
“We are not against Jewish people. We are against Zionism and what is going on in Palestine,” Mina McCamery said. People shout and wave Palestinian flags during a demonstration on Terreaux Square, in Lyon, central-eastern France, on July 23, 2014 to denounce Israel’s military campaign in Gaza and to show their support to the Palestinian people (AFP Photo / Romain Lafabregue)

Among the protesters there were orthodox Jews from an anti-Zionist organization. They were loudly cheered after leading chants of “Free Gaza.”
“The state of Israel does not speak for Jewish people,” one of their speakers told The Local.
Earlier, French authorities decided to ban the Pro-Palestinian rallies when Jewish-Muslim tensions in the country reached their peak. Among them was an event on July 13 that started out peacefully, but ended in stone-throwing and sporadic violence, with some Jews taking refuge inside two synagogues. There were several injuries. 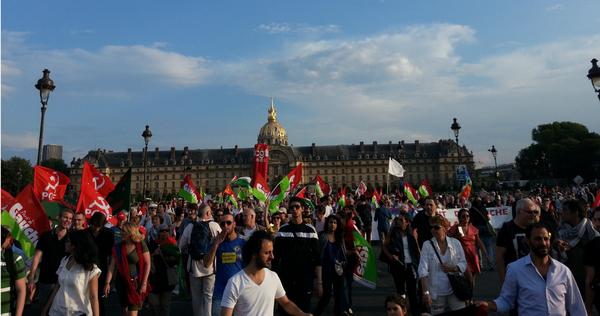 But Wednesday’s protest was authorized by the government after some of the organizers of the rally gave “security guarantees,” according to Prime Minister Manuel Valls.
Before the march, Interior Minister Bernard Cazeneuve warned that police would arrest anyone heard shouting “Death to the Jews!” or seen burning an Israeli flag during the protests.
“I have given specific orders to security forces so they can quickly intervene if any anti-Semitic acts are committed,” Cazeneuve told France Inter radio.

More than 1,000 undercover police officers deployed at the demonstration provided security and safety for the rally.
Paris activists clash with police following ban on pro-Palestinian rallies (PHOTOS, VIDEO)
Although there were concerns that the demonstration would turn violent – as the previous two marches – it passed off peacefully. According to a 26-year-old man named Islam “the only time pro-Palestinian demos end in violence is when the government has banned them,” reported The Local.
http://www.youtube.com/watch?v=sn05r_HwqMc

The National Collective for Just and Durable Peace between Israelis and Palestinians, the major organizer of Wednesday’s protest, welcomed the decision to let the rally go ahead.
“It’s a victory for democracy and freedom of expression,” Taoufiq Tahani, president of the France-Palestine Solidarity Association, told The Local. 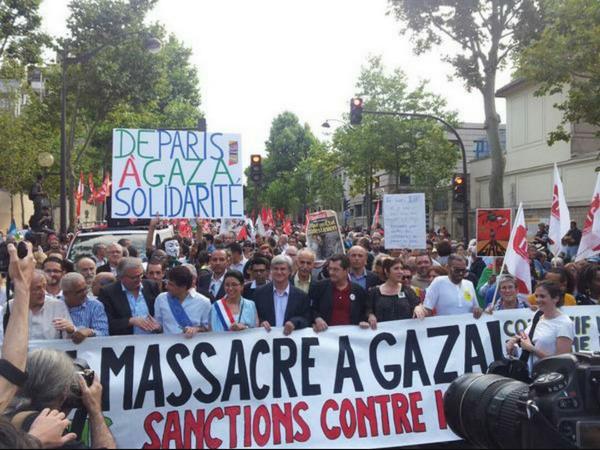 In addition to the Paris rally, protests were held in other French cities, including Lyon, Toulouse, Lille and Reims.
The organizers of the Pro-Palestinian rally are planning another one on Saturday. However, the authorities haven’t yet approved the gathering. Protesters wave Palestinian flags as they stand on a vehicle during a demonstration on July 23, 2014 in front of the Invalides in Paris, to denounce Israel’s military campaign in Gaza and to show their support to the Palestinian people (AFP Photo / Stephane De Sakutin)

Operation Edge, in the 16th day of the Israeli offensive on Gaza, has so far claimed the lives of over 700 Palestinians, many of them children and civilians.
The UN High Commissioner for Human Rights, Navi Pillay, said house demolitions and the killing of children raise the “strong possibility” that Israel is violating international law. Protesters take part in a demonstration on July 23, 2014 in Paris, to denounce Israel’s military campaign in Gaza and to show their support to the Palestinian people (AFP Photo / Stephane De Sakutin)

Thousands take to the streets of Vienna in Gaza protest (PHOTOS, VIDEO) 29

‘In our millions, we’re all Palestinian’: Wave of protests worldwide demand end to Gaza slaughter 32