Independent Living Bullion.
Petrodollar Spiral
David H. SmithOver the past few years, a sea change in international finance has been underway which will impact your pocketbook in a big way. Little noticed at first, it is becoming more obvious (and dangerous) with each passing month. Western banking interests avoid the awkward topic when they speak publicly, but privately they speak of it in guarded tones. Most Americans ignore the issue, assuming that because it seems to be taking place “over there,” we don’t need to pay attention. That attitude is about to change… I am referring to the unfolding peril posed by the decline of the petrodollar.Let’s take a brief look at the history leading to the petrodollar’s formation and how it came to play such a pivotal role in today’s world – for better, and now – for worse. 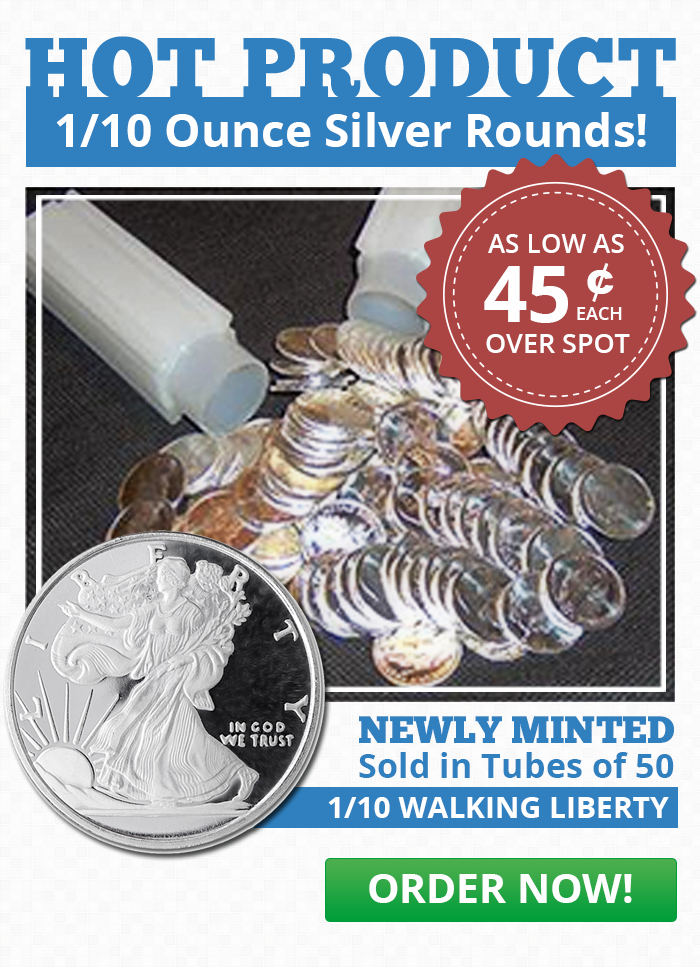 The Bretton Woods system, set up near the end of WWII, obliged participating countries to keep an exchange rate by tying their currencies to the U.S. dollar.  The dollar became the primary reserve currency. Global commercial transactions were conducted in dollars and settled through the U.S. banking system.  Other countries could redeem their dollars for gold at a fixed price of $35/ounce.Over time, U.S. government officials began to see that strong foreign demand for their currency meant they could print more dollars (run deficits) than they had gold to back up those dollars. Soon, foreigners caught on too. Losing confidence in the dollar’s value, they began demanding gold in exchange. The gold outflow became so pronounced that in 1971, President Nixon closed “the gold window,” ending dollar/gold convertibility. Other currencies began to float in value, but the dollar (now a fiat currency since it was no longer backed by gold) remained a reserve currency.With the dollar set adrift from its golden moorings, Nixon’s Secretary of State Henry Kissinger hastened to persuade the House of Saud to price Middle Eastern oil sales in dollars going forward.  (In return, the U.S. would provide the Saudi princes with military backing if needed.)  Thereon, any country wishing to purchase oil would have to exchange their currency for dollars beforehand and, for practical purposes, would need to hold large piles of U.S. dollars in reserve. These dollars, which do not circulate inside the U.S. and are not considered part of our domestic monetary supply, came to be known aspetrodollars.

The effect of this was to exchange a de jure gold standard for a de facto oil standard. It’s now 2014, and the U.S. has massively expanded it its currency base, much of it held in debt instruments by foreigners. We export some of our inflation, weakening the value (purchasing power) of the petrodollar. That causes foreign interests to doubt the wisdom of holding so much of an untrustworthy asset.Add to this the rise of the BRICs (a coalition of Brazil, Russia, India and China), who actively question the wisdom of relying solely on the U.S. dollar, and who now use their own currencies in transactions whenever possible. Finally, throw in a large dose of geopolitical conflict, Middle East brushfire warfare, and continued NSA spying around the globe. Add it all up and you’ve got the petrodollar sitting perilously on its perch, in a position likely – at the very least – to be knocked down a peg or two.The trend towards owning fewer U.S. dollars (and dollar equivalents like T-Bonds and Bills) is well underway around the globe. Dollars no longer form the exclusive basis for international lending. Dollars are being used less to purchase American-produced goods, most notably from China.  Holding fully 75% of its foreign exchange reserves in dollars in 2002, China is now down below 54% — and falling. (Continued below…)

A Weakening Petrodollar Impacts Your FinancesThis changing environment will affect you. And you should consider owning gold and silver because of it…Though most observers feel that the petrodollar won’t totally collapse in the near future, Jim Rickards, in his new book The Death of Money, believes that such an event is a distinct possibility. Even if the U.S. dollar only weakens enough to be ranked as “first among equals” – this would still be a major change, with huge implications for the rate of inflation, your purchasing power – and for the price of gold and silver. 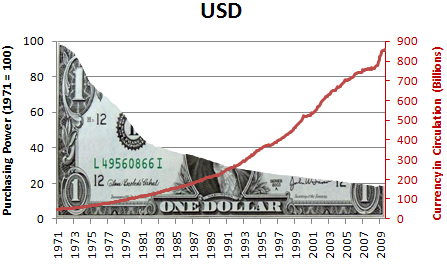 According to calculations by the Bureau of Labor Statistics, the dollar has lost over 80% of its purchasing power since 1973. In other words, what cost you a dollar to buy in 1973 now costs you $5. In just the last 10 years, the U.S. dollar’s purchasing power has lost 30%. During that time, gold has risen 400%. Are you willing to bet this trend won’t continue?Compliments of the U.S. dollar’s reserve currency status, we have been able to live wildly beyond our means – taking for granted our position as top dog. Like the diner who gets a poor meal at a once well-respected restaurant and stops going back, our profligate monetary policies are creating more and more dissatisfied customers. The time when America could run up debts in excess of 100% of its GDP – which is currently the case – is a chapter that’s rapidly coming to a close. Whether the dollar dies a slow death over a number of years, or one day just falls off a cliff as foreigners desert it en masse, the effects on largely unsuspecting Americans will be severe and long-lasting.Sam Zell, chairman of Tribune Company and Equity Group Investments, and one of the nation’s most prescient and astute investors, issued this warning:My single biggest financial concern is the loss of the dollar as the reserve currency. I can’t imagine anything more disastrous to our country. I think you could see a 25 percent reduction in the standard of living in this country if the U.S. dollar was no longer the world’s reserve currency. That’s how valuable it is.