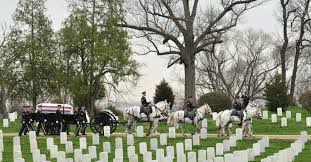 My lead flight attendant came to me and said,

“Are they military?” I asked.

‘Is there an escort?’ I asked.

‘Would you please tell him to come to the Flight Deck. You can board him early,” I said…

A short while later a young army sergeant entered the flight deck.  He was the image of the perfectly dressed soldier.  He introduced himself and I asked him about his soldier.

The escorts of these fallen soldiers talk about them as if they are still alive and still with us.  ‘My soldier is on his way back to Virginia,’ he said.  He proceeded to answer my questions, but offered no words.

I asked him if there was anything I could do for him and he said no.  I told him that he had the toughest job in the military, and that I appreciated the work that he does for the families of our fallen soldiers. The first officer and I got up out of our seats to shake his hand.  He left the Flight Deck to find his seat.

We completed our preflight checks, pushed back and performed an uneventful departure.

About 30 minutes into our flight, I received a call from the lead flight attendant in the cabin.

‘I just found out the family of the soldier we are carrying, is also on board’, she said.  She then

proceeded to tell me that the father, mother, wife and 2-year old daughter were escorting their

son, husband, and father home.  The family was upset because they were unable to see the

container that the soldier was in before we left.

flight home to Virginia .  The father of the soldier told the flight attendant that knowing his son was

family to bear.  He had asked the flight attendant if there was anything that could be done to allow

them to see him upon our arrival. The family wanted to be outside by the cargo door to watch

the soldier being taken off the airplane.

Airborne communication with my company normally occurs in the form of e-mail like messages.

I decided to bypass this system and contact my flight dispatcher directly on a secondary radio.

There is a radio operator in the operations control center who connects you to the telephone of the dispatcher. I was in direct contact with the dispatcher.  I explained the situation I had on board

with the family and what it was the family wanted.  He said he understood and that he

would get back to me.

Two hours went by and I had not heard from the dispatcher.  We were going to get busy

soon and I needed to know what to tell the family.  I sent a text message asking for an update.

I saved the return message from the dispatcher and the following is the text:

‘Captain, sorry it has taken so long to get back to you.  There is policy on this now, and I had

to check on a few things.  Upon your arrival, a dedicated escort team will meet the aircraft.

The team will escort the family to the ramp and plane side.  A van will be used to load the

remains with a secondary van for the family.

The family will be taken to their departure area and escorted into the terminal, where the

remains can be seen on the ramp.  It is a private area for the family only.  When the

connecting aircraft arrives, the family will be escorted onto the ramp and plane side to

watch the remains being loaded for the final leg home.

Captain, most of us here in flight control are veterans.  Please pass our condolences

on to the family.  Thanks.

I sent a message back, telling flight control thanks for a good job.  I printed out the message

very thankful and told me, ‘You have no idea how much this will mean to them.’

Things started getting busy for the descent, approach and landing.   After landing, we cleared

the runway and taxied to the ramp area.  The ramp is huge with 15 gates on either side of the

alleyway.  It is always a busy area with aircraft maneuvering every which way to enter and exit.

When we entered the ramp and checked in with the ramp controller, we were told that all traffic

was being held for us.

‘There is a team in place to meet the aircraft’, we were told.  It looked like it was all coming

together, then I realized that once we turned the seat belt sign off, everyone would stand

up at once and delay the family from getting off the airplane.  As we approached our gate,

I asked the copilot to tell the ramp controller, we were going to stop short of the gate to

make an announcement to the passengers.  He did that and the ramp controller said,

I stopped the aircraft and set the parking brake.  I pushed the public address button and said:

‘Ladies and gentleman, this is your Captain speaking: I have stopped short of our gate to make

a special announcement.  We have a passenger on board who deserves our honor and respect.

feet in the cargo hold.  Escorting him today is Army Sergeant XXXXXXX.  Also, on board are

his father, mother, wife, and daughter.  Your entire flight crew is asking for all passengers to

remain in their seats to allow the family to exit the aircraft first.  Thank you.’

We continued the turn to the gate, came to a stop and started our shutdown procedures.

A couple of minutes later I opened the cockpit door.  I found the two forward flight attendants

crying, something you just do not see.  I was told that after we came to a stop, every passenger

When the family got up and gathered their things, a passenger slowly started to clap his hands.

Moments later, more passengers joined in and soon the entire aircraft was clapping.

Words of ‘God Bless You’, I’m sorry, thank you, be proud, and other kind words were uttered

to the family as they made their way down the aisle and out of the airplane.  They were escorted

down to the ramp to finally be with their loved one.

Many of the passengers disembarking thanked me for the announcement I had made.

They were just words, I told them, I could say them over and over again, but nothing I say

will bring back that brave soldier.

and women have made to ensure our freedom and safety in theseUnited States of AMERICA.

Foot note:  I know everyone who reads this will have tears in their eyes, including me.  Prayer chain for our Military… Don’t break it!  Please send this on after a short prayer for our service men and women.  Don’t break it!  They die for me and mine and you and yours and deserve our honor and respect.

U S  Army Major General Harold Greene was buried at Arlington National Cemetery with full military honors, including a caisson, two escort platoons, casket team, firing party, colors team, and a caparisoned horse.   The U.S. Army band, “Pershing’s Own,” played softly as the funeral procession made its way down the long hill past the rows of simple white gravestones to bring General Greene to his final resting place.
The graveside service began with a few words, followed by a 13-gun salute.  The major general’s widow, Dr. Susan Myers, was seated in the front row.   To her right was their son 1st Lt. Matthew Greene, his daughter Amelia Greene, followed by Major General Greene’s father, also Harold Greene.
After three rifle volleys and the playing of “Taps,” the American flag, once placed on the major general’s casket, was carefully folded as the band played “America the Beautiful.”   U S Army Chief of Staff General Ray Odierno presented the flag to his widow, and additional flags to his children and father.
General Greene, 55, became the highest-ranking fatality in the war in Afghanistan after an Afghan military police officer opened fire on August 5, 2014.
Among the missing at the service were……
No
President
No
Vice President
No
Secretary of State
No
Secretary of Defense
In all fairness, President Barack Hussein Obama was unable to attend because of a conflict with his Tee Time…….
From the Prairies of the Dakotas:  While a Military Daughter Buries Her 2-Star General Daddy, the Commander-in-Least is Nowhere to Be Found.   When two-star Major General Harold Greene, the highest-ranking officer killed in combat since Vietnam, was laid to rest in Arlington National Cemetery on Thursday, neither the President nor the Vice President were present.   The nominal Commander-in-Chief Barack Obama was playing a round at the Vineyard Golf Club with Valerie Jarrett’s cousin, Cyrus Walker, the World Bank president and former President of Dartmouth College Jim Kim, and former lobbyist and ambassador Ron Kirk.  The clownish Joe Biden was in the middle of the third day of a week long vacation in the Hamptons, which followed a week in Wyoming, which was preceded by a week at Rehoboth Beach in Delaware.
While America has lost a two-star General who has served in a war the president has waged questionably, the Commander-in-Chief could not show the common decency to honor him with his presence.  Instead, President Obama showed it was more important to play yet another round with well-connected elites, as the nation grieves and families suffer. The disconnect could not be more profound.
YET THREE OF OBAMA’S ADMINISTRATION REPS WERE SENT TO FERGUSON, MO.  FOR THE FUNERAL OF A BLACK TEEN.  continuing the game of “Suck Up” to his constituency…
If you read this far, here’s a thought:
If the democratic party continues to hold the senate after next January, it is likely that el presidente will get to nominate a new justice for SCOTUS — a life-time appointment. If bader-ginsburg is replaced, it will be somewhat of a wash insofar as doctrine is concerned but there’s still the issue of extension and, as I understand it, a justice does not  have to be a licensed attorney….anybody will do. Consider justice eric holder or  justice michelle obama for openers. Feel free to add your candidates to the list..However,should the 5-4 situation be changed to 4-5, The Constitution effectively goes out the window, with the Bill of Rights.