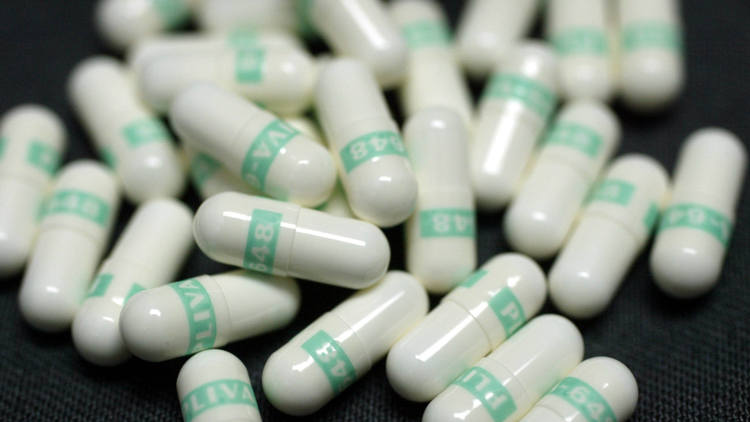 Antidepressants rapidly alter brain architecture
A single dose of SSRI antidepressants such as Fluoxetine, shown here, can change the brain’s functional connectivity within three hours, a new study found. (Joe Raedle / Getty Images)
By GEOFFREY MOHAN contact the reporter Medical ResearchDrug ResearchMental Health ResearchHuman BehaviorScientific Research
No bummer: antidepressants work faster than we think they do, study suggests
Drugs tinker with brain connections within three hours, study of antidepressants says
A single dose of a popular class of psychiatric drug used to treat depression can alter the brain’s architecture within hours, even though most patients usually don’t report improvement for weeks, a new study suggests.
More than 1 in 10 adults in the U.S. use these drugs, which adjust the availability of a chemical transmitter in the brain, serotonin, by blocking the way it is reabsorbed. The so-called Selective Serotonin Reuptake Inhibitors, or SSRIs, include Prozac, Lexapro, Celexa, Paxil and Zoloft.
————
Related story: To quash depression, some brain cells must push through the stress
Related story: To quash depression, some brain cells must push through the stress
Melissa Healy
FOR THE RECORD: A previous version of this post and a photograph identified Effexor as an SSRI category antidepressant. It is a serotonin-norepinephrine reuptake inhibitor, or SNRI.
————
The findings could be a first step toward figuring out whether a relatively simple brain scan might one day help psychiatrists distinguish between those who respond to such drugs and those who don’t, an area of mystery and controversy in depression treatment.
Researchers at the Max Planck Institute in Leipzig, Germany, used a magnetic resonance imaging machine to compare connections in the gray matter of those who took SSRIs and those who did not. They were particularly interested in what goes on when the brain is doing nothing in particular.
lRelated A new fast-acting antidepressant (that’s not ketamine) shows promise
SCIENCE NOW
A new fast-acting antidepressant (that’s not ketamine) shows promise
SEE ALL RELATED
8
“We just tell them to let their minds wander and not think of anything particularly dramatic or upsetting,” said neuroscientist Dr. Julia Sacher, a co-author of the study published online Thursday in the journal Current Biology.
They created 3-D maps of connections that “matter” to gray matter: interdependence, not just anatomical connection. They relied on a discovery in the late 1990s that low-frequency brain signaling during relative inactivity, such as daydreaming, is a good indicator of functional connectivity.
In a perfect world, you would look not only at SSRIs, but all sorts of medications and non-pharmacological interventions.
– Julia Sacher, psychiatrist and neuroscientist, Max Planck Institute
When more serotonin was available, this resting state functional connectivity decreased on a broad scale, the study found. This finding was not particularly surprising — other studies have shown a similar effect in brain regions strongly associated with mood regulation.
But there was a two-fold shock: Some areas of the brain appeared to buck the trend and become more interdependent. And all the changes were evident only three hours after the single dosage.
“It was interesting to see two patterns that seemed to go in the opposite direction,” Sacher said. “What was really surprising was that the entire brain would light up after only three hours. We didn’t expect that.”
Most people who use antidepressants don’t report any discernible change in mood for at least two weeks, said Sacher, who also is a psychiatrist.
The rapid connectivity shifts noted by the study might therefore be precursors to longer-term changes, perhaps starting with remodeling of synapses, the microscopic gaps where chemical neurotransmitters such as serotonin flood across to an adjacent brain cell, the study suggests. But this type of brain scanning can’t pick up changes at such a scale, so the hypothesis will have to be tested other ways, Sacher added.
Related story: Antidepressants and self-harm: For those under 24, initial dose matters
Related story: Antidepressants and self-harm: For those under 24, initial dose matters
Melissa Healy
More research also will be needed to explain why the functional connectivity of the cerebellum and thalamus apparently increased. The cerebellum, or “little brain” is a relatively primitive structure that processes signals from the spinal cord, relaying them to the thalamus and on up to the cortex. Many of those pathways are regulated by serotonin.
Although the cerebellum is associated mostly with such basic functions as motor control and coordination, there are hints that it plays a role in higher cognitive tasks, perhaps by changing the way the thalamus relays signals to the cortex.
Although many open hypotheses remain to be explored, the brain maps produced by the study advance the effort to identify a brain “fingerprint” for those who might respond to SSRI therapy, researchers said.
Study subjects did not have diagnoses of depression, so researchers will need to generate similar maps among those diagnosed with depression, and re-map them during and after depressive episodes, as well as after treatment, Sacher said. Comparisons might then show whether a certain initial architecture predicts treatment success.
“In a perfect world, you would look not only at SSRIs, but all sorts of medications and non-pharmacological interventions,” Sacher said. “That would really help to tailor individual therapy for someone in the midst of a depressive episode.”
Sacher said she prescribes SSRI drugs for patients. The study, however, did not receive funds from pharmaceutical companies, she added.
Twitter: @LATsciguy