Michael Snyder
Activist Post
Did you know that the rate of homeownership in the United States has fallen to a 20-year low?  Did you know that it has been falling consistently for an entire decade?
For the past couple of years, the economic optimists have been telling us that the economy has been getting better.  Well, if the economy really has been getting better, why does the homeownership rate keep going down?
Yes, the ultra-wealthy have received a temporary financial windfall thanks to the reckless money printing the Federal Reserve has been doing, but for most Americans economic conditions have not been improving.  This is clearly demonstrated by the housing chart that I am about to share with you.
If the economy really was healthy, more people would be getting good jobs and thus would be able to buy homes.  But instead, the homeownership rate has continued to plummet throughout the entire “Obama recovery”.  I think that this chart speaks for itself… 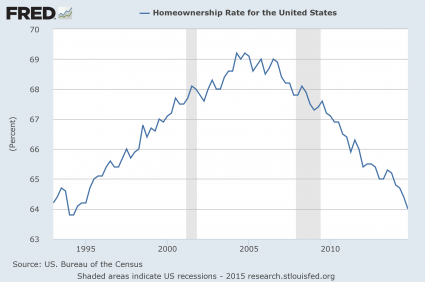 Of course this homeownership collapse began well before Barack Obama entered the White House.  Our economic problems are the result of decades of incredibly bad decisions.  But anyone that believes that things have “turned around” for the middle class under Barack Obama is just being delusional.

If the U.S. economy truly was in “good shape”, the percentage of Americans that own homes would not be at a 20 year low…

The U.S. homeownership rate fell to the lowest in more than two decades in the fourth quarter as many would-be buyers stayed on the sidelines, giving the rental market a boost.

The share of Americans who own their homes was 64 percent in the fourth quarter, down from 64.4 percent in the previous three months, the Census Bureau said in a report. The rate was at the lowest since the second quarter of 1994, data compiled by Bloomberg show.

Rising prices and a tight supply of lower-end listings have put homes out of reach for some entry-level buyers, who also face strict mortgage standards. The share of U.S. homebuyers making their first purchase dropped in 2014 to the lowest level in almost three decades, the National Association of Realtors reported last week.

And it appears that this trend is actually accelerating.  During 2014, the rate of homeownership plummeted by a total of 1.2 percentage points for the year.  That was the largest one year decline that has ever been measured.

So why is this happening?
Well, in order to buy a home you have got to have a good job, and good jobs are in very short supply these days.
Over the past decade, the quality of the jobs in our economy has steadily declined as good jobs have been replaced by low paying jobs.  In addition, government policies are absolutely murdering small business.  At this point, small business ownership in the U.S. is hovering near record lows.
This has resulted in millions of people falling out of the middle class, and it has contributed to the growing divide between the wealthy and the rest of the country.
If our economy was working the way that it should, the middle class would be thriving.
But instead, it is being systematically destroyed.  If you doubt this, I have some statistics that I would like to share with you.  The following facts come from my previous article entitled “The Death Of The American Dream In 22 Numbers“…

#2 One recent survey discovered that 55 percent of Americans believe that the American Dream either never existed or that it no longer exists.

#3 Considering the fact that Obama is in the White House, it is somewhat surprising that 55 percent of all Republicans still believe in the American Dream, but only 33 percent of all Democrats do.

#4 After adjusting for inflation, median household income has fallen by nearly $5,000 since 2007.

#6 At this point, 59 percent of Americans believe that “the American dream has become impossible for most people to achieve”.

You can read the rest of that article right here.
The group that has been hit the hardest by all of this has been young adults.
Back in 2005, the homeownership rate for households headed up by someone under the age of 35 was approximately 43 percent.
Today, it has declined to about 35 percent.
From a very early age, we push our young people to go to college, and today more of them are getting secondary education than ever before.
But when they leave school, the “good jobs” that we promised them are often not there, and most of them end up entering the “real world” already loaded down with massive amounts of debt.
According to the Pew Research Center, close to four out of every ten households that are led by someone under the age of 40 are currently paying off student loan debt.

It is hard to believe, but total student loan debt in this country is now actually higher than total credit card debt.  At this point, student loan debt has reached a grand total of 1.2 trillion dollars, and that number has grown by an astounding 84 percent just since 2008.
If you are already burdened with tens of thousands (or in some cases hundreds of thousands) of dollars of debt when you get out of school and you can’t find a decent job, there is no way that you are going to be able to afford to buy a house.
So we have millions upon millions of young people that should be buying homes and starting families that are living with their parents instead.
Back in 1968, well over 50 percent of all Americans in the 18 to 31-year-old age bracket were already married and living on their own.
But today, that number is actually below 25 percent.  Instead, approximately 31 percent of all U.S. adults in the 18 to 34-year-old age bracket are currently living with their parents.
Something has fundamentally gone wrong.
Our economy is broken, and anyone that cannot see this is just being foolish.
So what is the solution?
Please feel free to share what you think by posting a comment below…
This article first appeared here at the Economic Collapse Blog.  Michael Snyder is a writer, speaker and activist who writes and edits his own blogs The American Dream and Economic Collapse Blog. Follow him on Twitter here.