Oftentimes more than double the spending

BY ANTHONY GUCCIARDI
POSTED ON FEBRUARY 11, 2015

Surely Big Pharma corporations are spending their cash on research ‘for the cure’ and finding ways to implement life-saving ingredients into their next formula, right? As it turns out, 9 out of 10 Big Pharma companies actually spent more on their sales and marketing than their research and development.

In the infographic below, checkout the 2013 spending habits of the top 10 Big Pharma corporations: 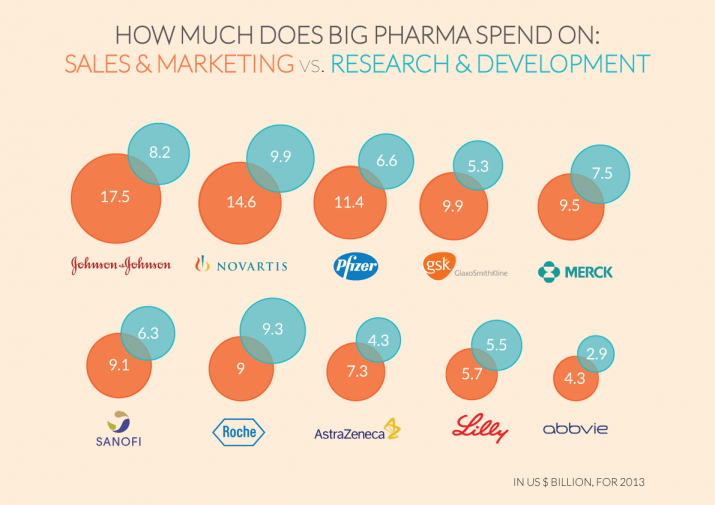 When we put this spending into perspective, it’s much easier to see how Big Pharma pushes drugs on the public that are absolutely riddled with side effects and still somehow manages to make a massive profit. Even standard pharmaceuticals come with a long list of over 70 side effects, with some clocking in at side effect counts that reach beyond 500.

So how do they do it? Quite simply, they spend billions marketing their pharmaceuticals with smiling models and nature-filled backdrops.

Google Plus ProfileAnthony is the Founding Director of NaturalSociety, whose writings on the subject of health and wellness have reached tens of millions of readers worldwide. A proponent of an organic lifestyle, the growth of alternative news, and a dedication to aiding various non-profit organizations, NaturalSociety was Anthony’s next step in what he calls “highlighting what you won’t be hearing about on the major news networks.” Anthony has appeared on both grassroots and established platforms alike, including routine appearances on Drudge Report, Daily Mail, RT, The Blaze, Infowars, Michael Savage’s Savage Nation, Coast to Coast AM, and many others.