The security lock down surrounding the 2015 Bilderberg Group conference reached a new intensity last night when London Guardian journalist Charlie Skelton received a midnight visit from police who entered his hotel room, demanded to see his papers and inspected his vehicle while shining a searchlight in his face.

After traveling through two checkpoints and showing his papers, Skelton arrived at his hotel only to realize that he had left his laptop in the vehicle.

When Skelton went out to retrieve the laptop, he was confronted by three armed police who again demanded he show his ID before entering his rented lodge.

Exasperated with the presence of the officers, who remained for over 15 minutes, Skelton decided to strip down and have a shower. When he emerged, the police were still in his lodge.

“I stripped down, had a shower and came out in my towel and they said ‘sir, we need you to get dressed, we need to check your vehicle again’.” Police then used torches as they searched through Skelton’s car once again. 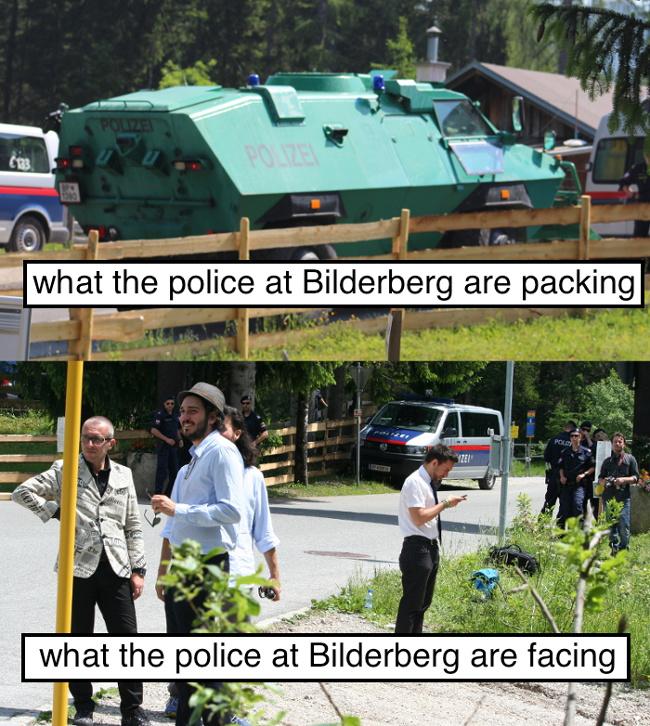 Skelton decided to pass the time by giving the police a lecture on who was actually meeting at Bilderberg, including convicted criminals like David Petraeus and Austrian real estate investor René Benko.

“This is silly, this is harassment, this is one in the morning,” Skelton told the police.

“There was a searchlight mounted on top of the van pointing at me, it was like a scene from Stalag 17 – it was silly,” added the Guardian writer.

Infowars reporters Rob Dew and Josh Owens were also visited at their hotel shortly after arriving in Austria.

While journalists at the G7 meeting were pampered, given goodie bags, free food halls and relaxation rooms, reporters at Bilderberg 2015 in Austria have been under constant surveillance and harassment.

A huge security operation involving 2,000 police, numerous checkpoints and even an armored vehicle are being used, at taxpayer expense, to deal with what amounts to no more than two dozen journalists, bloggers and less than a handful of protesters.