A man helps an injured woman after an explosion during a peace march in Ankara, Turkey, October 10, 2015. © Recep Yilmaz / Reuters

Dozens of people have been killed and scores injured in two blasts at a peace rally in the Turkish capital, Ankara, officials said. According to the Turkish government, the explosions appeared to be the result of suicide bomb attacks.

The death toll from the tragedy has reached 95 people, the office of Turkish Prime Minister, Ahmet Davutoglu, said.
Earlier, Health Minister, Mehmet Muezzinoglu, said that at least 186 people have also been injured in the incident, with 28 of them in intensive care.

According to local media, the explosion took place near Ankara Central railway station, the busiest in Turkey, which serves 181 trains daily. Several ambulances have been reportedly seen at the scene.

According to Lami Ozgen, head of the Confederation of Public Sector Trade Unions, or KESK, the bombs “exploded in very short intervals,” AP reported. 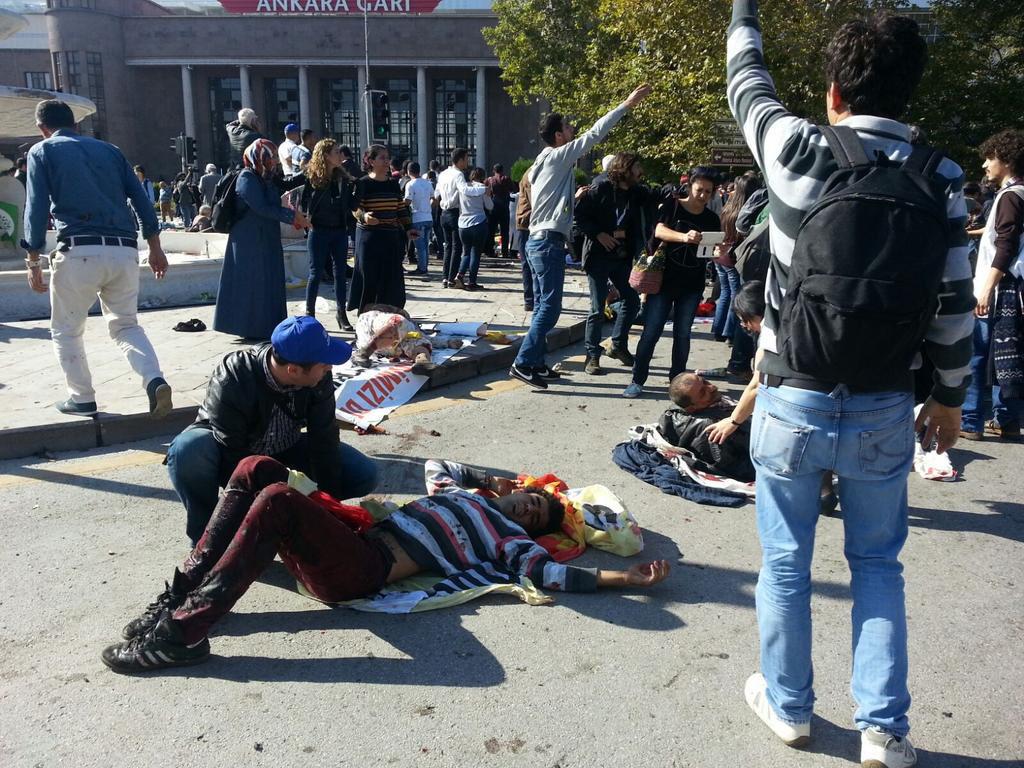 The explosions occurred at a rally dubbed “Labor, Peace, Democracy” that kicked off at 10:00 local time (0700 GMT). Turkey’s largest trade unions were planning to get together for a demonstration to protest the Turkish government’s renewed military campaign against Kurdish rebels.

“We are investigating the explosion and will share our findings with the public as soon as possible,” a Turkish official told AFP.

Later, Davutoglu said the attack could have been carried out by Islamic State (IS, formerly ISIS/ISIL), Kurdish militants, or radical leftist groups.

“Since now ISIS is having hard times in Syria. Those fighters might be coming back to Turkey; might be planning more attacks in central location; in possibly touristic areas or in Istanbul, which is the economic capital of Turkey,” journalist Isil Sariyuce told RT.

Turkish President Tayyip Erdogan has commented on the attack, calling for “solidarity and determination as the most meaningful response to terror.”

“Like other terror attacks, the one at the Ankara train station targets our unity, togetherness, brotherhood and future,” he said.

The hashtag #Ankaradayız (We are Ankara) has been used in 35,000 retweets in the hours since the attack.

Turkish labor unions, who were among the organizers of the peace rally, have called for a two-day strike from October 12 to 13 in response to the bombing. 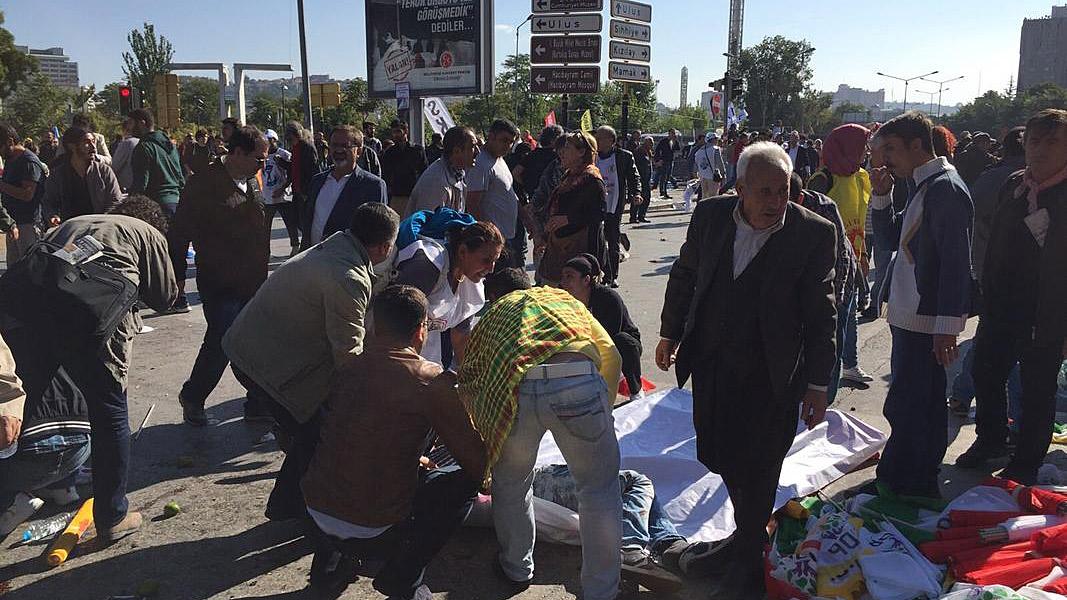 Thorbjørn Jagland, Secretary General of the Council of Europe, condemned the attack.

“The news from Ankara this morning is shocking and disturbing. This is a ruthless and barbaric attack on peaceful demonstrators. I express my condolences to all who have lost their friends and loved ones. Freedom of assembly and freedom of expression are fundamental pillars of democracy,” he said.

Russian President Vladimir Putin has sent his condolences to Turkish President Tayyip Recep Erdogan over the Ankara tragedy, the Kremlin press service said in a statement.

In his telegram, Putin expressed the hope “that the perpetrators of this cynical crime would be brought to justice, and confirmed readiness for close cooperation with the Turkish authorities in the fight against the terrorist threat,” the statement added.

Shortly after the attack, the Kurdistan Workers Party (PKK) announced it was planning to halt its activity in Turkey, a news website close to the PKK reported, as cited by Reuters.

“Just after the beginning of the march, at about 10:04 a.m., two bomb attacks occurred among the HDP cortege. For this reason, it is understood that the main target of the attacks was the HDP,” the party said.“Many of the injured people are heavily injured, so there is a fear that the number of dead people may increase.”

HDP leader, Selahattin Demirtas, blamed the government for the attack, saying that it was part of Erdogan’s campaign against the Kurds.

“The government’s right and chance to hum and haw has long expired. You are murderers. Your hand is bloody. Blood has splattered from your face, your mouth to your nails and all over you. You are the biggest supporters of terror,” Demirtas said, as cited by Reuters.

PM Davutoglu refuted the accusations, calling them an “open provocation.”

No one has claimed responsibility for the terrorist attack, but it comes amid renewed fighting between Turkish security forces and Kurdish rebel forces.

In July at least 30 people were killed and over 100 injured in an explosion that struck a cultural center in the town of Suruc, southeast Turkey, near the Syrian border, in what the authorities called a “terrorist attack.”

The Kurds have been fighting Turkish authorities for several decades, demanding an independent state or at least greater autonomy. The Turkish Kurds’ main insurgent group, the PKK, considered as a terrorist organization by Turkey, the US and NATO, was founded in 1978 and has been engaged in fighting with Turkey since 1984.

In September, the PKK claimed that its fighters had killed 15 Turkish soldiers in a surprise attack on an armored convoy.

Earlier this month, Turkey mounted a military assault on the city of Silvan, which has a mainly Kurdish population, killing at least 17 militants.