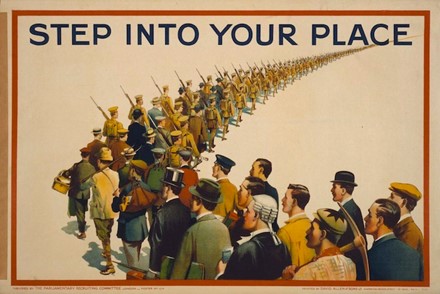 We have a word in English to describe the act of taking someone against their will and forcing them to work for you. It’s called slavery. One form of this, indeed the most heinous form of this, would be a military draft. Because this particular form of slavery involves much more than being forced to pick cotton on a plantation; it involves the high possibility of being blown to smithereens on a battlefield. All while working a profession that you did not choose, fighting a war that you might not agree with, to benefit politicians that you probably don’t even know. Regardless of whether you are drafting men or women; the very premise of a draft is completely at odds with the idea of liberty.

Drafting men is evil. Drafting women is evil and insane.

Some would say that drafts are sometimes necessary to defend liberty. But what type of liberty is this defending? The liberty of a nation to say that certain people have no liberty at all? That certain people are required by law to be killed if their government gods dictate it is so? To die for such a liberty as this is to die for liberty as a myth. True liberty means you choose what you will and won’t do with your life. And no one, including the self-perceived federal masters can force you to.

The great economist Walter Williams (who happens to be black) once stated that requiring young men to register for the draft is like asking black people to register for slavery, just in case the government decides they want to change their mind and re-institute it. Williams dramatic illustration is right on point. Should black people be forced to do something against their will just because they are black? Of course not. Should 18-25 year old males be forced to? Presently they at least have to “register” to be government slaves even though there currently is no draft. And if some people have their way this military slavery should be extended and forced upon our daughters as well. This is taking an already evil practice; and expanding the evil to include even more unwilling participants. And Marco Rubio, Jeb Bush, and Chris Christie are fine with that. The Larry, Moe, and Curly of the recent Republican debates stated this without reservation. And their answers to the question of women being drafted were bizarre at best.

All three of these hacks tried to spin the question to mean “opportunity for women.” Christie said, “There is no reason why one young woman should be discriminated against from registering for the selecting service. The fact is we need to be a party and a people that makes sure that our women in this country understand anything they can dream, anything they want to aspire to, they can do.” With all do respect, what the heck is Christie talking about?!?!? Who “dreams” of being drafted? If a woman dreams of serving in the military she can VOLUNTEER for that! A draft means you’re taking someone against their will and FORCING them to serve. That’s not a dream, its a nightmare! Christie is either ignorant of what a draft is, or he’s banking on the fact that YOU are ignorant of what a draft is, or he was trying to dodge the question by sounding “inclusive.” My belief is that Christie was not speaking out of ignorance. He knows full well about the government’s power to force it’s views on it’s citizens because he’s done it numerous times as governor of New Jersey. Christie isn’t stupid. Rubio, on the other hand, might very well be.

Rubio was exposed, ironically enough by Christie himself, to be the mindless political hack that he is. When confronted on his readiness to be President, Rubio dove into his canned mantra about “the fiction that Barack Obama doesn’t know what he is doing….” Even when Christie openly mocked Rubio and twice pointed out that Rubio was simply repeating a canned line that his advisers gave him, Rubio inexplicably continued to repeat it. While sweating profusely and giggling nervously, Rubio showed no ability whatsoever to think on his feet and engage in a true debate when knocked off of his talking points. Rubio exhibited for all the world to see why so many Americans are disgusted with politics in general, and politicians in specific. Rubio the Robot is likely finished as a candidate and will soon head back to Little Havana where he can charm the deceived dolts that put him into office. And the sooner he is gone the better, for he too would gladly take your daughters and have them blown up on the battlefield for his benefit. Here’s what he said in response to the question of drafting women: “I do believe that selective service should be opened up to both men and women if a draft is ever re-instituted.”

Similar to Christie, Rubio tried to spin it as an “equal opportunity” for women. As though it would be discriminatory to not force women to die the same way we would force men to. And so I repeat my previous point that the “opportunity” to serve already exists by volunteering for service. Forced servitude is not an “opportunity.” It is slavery. A slavery that Rubio supports.

And what about Jeb Bush? What do we make of him? He’s simply pathetic. From day one in this campaign he has run as fast as he could from the Bush name. Until now that he is being pummeled in the poles. Now he has his aged mother shilling for him in New Hampshire in the vain hopes that the Bush monarchy might continue. But Jeb is soon to be finished as well. Thankfully. Here’s his take on drafting women: “I think that we should not impose any kind of political agenda on the military. There should be—if women can meet the requirements, the minimum requirements, for combat service, they ought to have the right to do it, for sure.” More nonsensical drivel from the third of the three stooges. And once again we see a putrid attempt to dress up the draft with language of “rights.” A woman has the “right” to be drafted. Earth to Bush, “Being forced to do something against your will isn’t a right!” In fact a “right” is just the opposite. Women have the “right” to be left alone and pursue whatever occupation they please. So do men. But not in Bush’s world.

Some see this talk of the military draft as a moot point since currently we have no draft. But the very fact that young men are still required BY LAW to register for a hypothetical draft proves the point that hypothetical slavery is still possible. If any one of these poor excuses for a man had any real nerve they would have blasted the entire idea of a draft as being anti-liberty. They would have cried out with loudest voice that they would never dream of sending someone else’s son to die against his will just to protect their interests. And they most certainly would had the spine to refuse, even the thought, of sending daughters to die for their interests. The fact is we have a very limited freedom in America today. Rubio is free to wear his fancy Italian boots. Christie is free to eat until his gut is content. And Bush is free to sip fine wine and nibble on caviar. I’m glad we have such freedom. But I’m not glad that these three stooges would be willing to have my daughters (or my son) killed so they can live like the king pigs of the national pig pen. They should be ashamed. I doubt they are, but they should be.

Reprinted with permission from Target Liberty.