Over The last two years these kinds of memes have shown up all over social media.  And I do mean over and over again.  There is a definite theme here that has been allowed to fester for far too long . 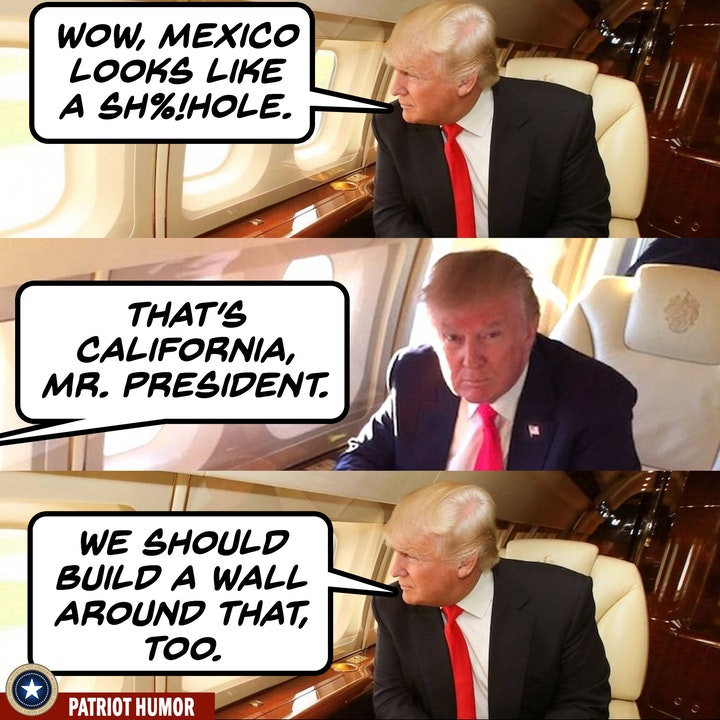 It’s funny right? Is it?

In actuality this would be fine with me and I live here!  One YUUUUGE wall around my State!  We’ll keep the ports.  Regarding the Pacific, be warned the US Coast Guard and Navy will have to reside in International Waters.  We’ll address implementing a huge moratorium on people from other states or countries moving here, trying to start businesses or buying land.  If you’re all lucky we might export but we will not be importing for some time. Tariff’s may have to ensue.  Landowners already here will be assessed on a case by case process.  Don’t think this state isn’t already in the process of transitioning. We either stand together or we are through.

I’ve never seen the United States so UN-United when it comes to burying California or any other state for that matter that has been ruined by Democrats, the left, progressives and more ominously the ‘globalists and their dirty money.

Trash talkers bitch about Hollywood, but I bet they’ve paid for a few movies at theaters, bought countless DVD’s, logged millions of hours of “television”, bought the left’s clothes, their ideals, taught their children the same, maybe they even vacationed here, or moved to take advantage of this once Great State – but then they left and DID NOT leave it the way they found it!  In retrospect these trash talkers have no problem forgetting they helped support and pay for the state’s and their family’s demise willingly for decades by embracing everything trendy and cool.

I witnessed it first hand for 65 years now and have fought tooth and nail against it since the 1960’s. I find it disconcerting the rest of America can turn it’s back on the takeover of every coastal state by Globalists, the same people you allowed into YOUR homes, then thinking shaming the citizenry of those states will set them straight or just toss them as if they weren’t fighting all along.

How arrogant to give up on the 4 million conservatives who voted for Trump, the last bastion of any hope of saving California.  In fact, it’s okay, we get it, it’s easier to blame.  We kind of figured this out three years ago when we hit those Hollywood streets in support of Trump! And still do!

The Governor and it’s Representatives checked out a long time ago here or haven’t you noticed.  They DO NOT represent us, I repeat they DO NOT represent us.  So yah we get it.  Use, abuse and toss. That is the message California has gotten from the rest of the nation as well as the Globalists themselves.  Forgive them Lord they know not what they do.

Now don’t worry with all your rhetoric about paying to save California.  With the rest of the country out of our hair we’ll get your money back to you that you have graciously loaned us throughout the years.  Whatever monies the Federal Government feels they are owed, we are perfectly willing to come to the table and clear up. We will no longer be responsible for paying your taxes and we won’t be asking for any more Federal money.  California’s resources are immeasurable, thank the Lord!  May take some time but that is the only thing that is on our side at this point, certainly not United States unity.

These UN-uniters though, these trash talkers who call themselves Patriots, have turned their backs on a state whose economy kept the United States in the top ten worldwide economy’s for decades. A state that is NOT a complete shithole, a State whose citizenry has fought back and has never stopped. But you wouldn’t know that unless you live here.  It’s easy to throw stones but it’s much more telling to hold up a mirror. Bashing California is NOT going to fly, especially when you helped create this mess here, as well as throughout “these united States” with your complicity!

Californians would be remiss to forget how the nation turned it’s back on them including the President but his hands are pretty full right now with the rest of the un-united nation, so yah a wall would be just fine!  We will remember.

From this point don’t bother taking Route 66 in, the roads are closed to California.  We will not leave the light on for you.  You are not welcome anymore. It’s clear even the Founding Fathers would agree we don’t deserve the Republic because we weren’t smart enough to keep it.