These are the faces of pure hatred! These are the people lying to your face. These people hate Jews, Americans, decency and have absolutely NO moral compass.  But they are paraded before you on a daily basis as a shocking reminder of how bad things have really gotten.  If you do not stand up and fight the face of this unbridled demonic undermining of all that is good, you deserve to lay with them and be shunned forever.
America has allowed the infestation of the best bad guys as a model, of what we don’t want to flourish, and it’s shoved in your faces daily – will we take heed, will we stop it?!  At the risk of stating the obvious these haters, along with the Dems, liberals, & progressives who have become freaks of nature, ARE those bad guys! Stop them in their tracks at every opportunity!
It’s time to fight back with words of morality, decency and rising above these purely baseless discussions they like to keep you in.  Every time you are confronted with one of these mouthpieces of hatred, say a quick prayer that you can find the right words to convey to them their mistakes of perceptions based on lies, jealousy and hate.  Most of them are gone mentally and there will never be an opportunity to get through to them, that is their journey into the abyss.  But you still call them out every single time, even if its saying that you are praying they find a cure for their TDS!
The silent majority needs to be silent NO MORE!  Liberty is at stake, America is on the chopping block by our savaged tribal thinking counterparts.  Are you going to LET America die, will you stand by and do or say nothing?  The Founding Fathers are waiting…. A young Jewish woman calls out from her seat in the auditorium at UMass Amherst’s Fine Arts Center. She confronts former CNN Commentator Marc Lamont Hill over his apparent indifference to ongoing rocket attacks against Israeli civilians launched by terrorists living in the Gaza Strip.

Hill, who lost his job at CNN because of his use of Hamas eliminationist rhetoric he made a few weeks before, is sharing the stage with two other Israel haters, Linda Sarsour and Roger Waters, the former bass player for the rock group, Pink Floyd. The panel is rounded out by David Zirin, an American Jew and sports writer who regularly affirms the ugliest defamations leveled against the Jewish state by its detractors.

None of the folks on the stage are moved by the woman’s complaints. Other people in the audience are openly hostile to her concerns over threats to Jewish safety. A young woman in another nearby seat yells out a long, dismissive, “Oh boo hoo!” The woman worried about rocket attacks against her fellow Jews in Israel is hauled away by the UMass police. As it turns out, her complaints are prescient and spot-on. By the end of the weekend, four Israeli civilians are killed by exactly the type of rocket fire she was complaining about.

This was the scene at a May 4, 2019 speaker’s panel, “Not Backing Down: Israel, Free Speech and the Battle for Palestinian Rights,” sponsored by eight UMass Amherst academic departments. During the panel, Sarsour declares that Israelis “got a lotta resource, but what they don’t have is morals. They don’t have principles.” 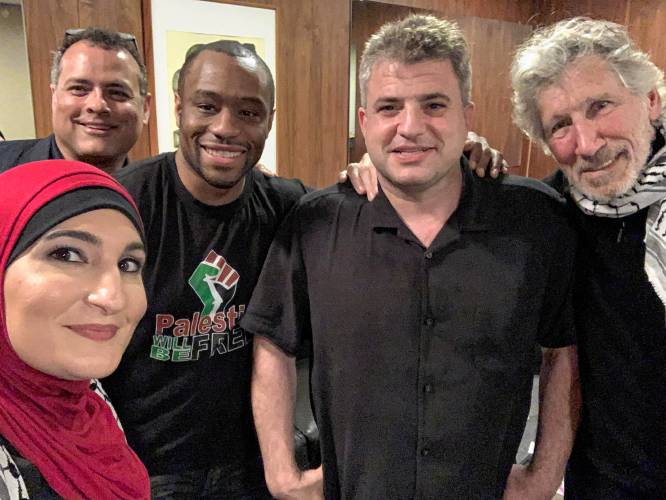 Waters read a poem to the 2,000 people in the hall. The poem seems to obliquely refer to Jews doing their best to “sit in their bomb-proof lairs” and “fill the family vault” while they rain down destruction on their adversaries. The poem ends with “FUCK them/Enough/They’ve had their time/A new day dawns/And we will not be swaddled in their grime.”

It’s not the 1930s; they are words spoken and acts committed – on the campus of a state-funded university – on the first weekend of May 2019.  and they are startlingly representative of the rise of casual antisemitism on campuses across the US. This is a trend that, in this day and age, is sometimes enabled and abetted by schools that receive taxpayer funds – funds that are utilized to protect the views and voices of such bigots.

On that night, inside the concert hall of the fine arts center, a cavernous and austere 2,000 seat auditorium where perhaps in previous years one may have heard the sorrowful notes of an orchestra rendering Vivaldi or Mozart, attendees were instead treated to what was in fact a university- sponsored diatribe against the rights of Jewish people to self-determine and live in their ancestral homeland.

People in the audience who tried to counter the ugly narrative on display were denounced by their neighbors, who gladly pointed them out to the police as if they were witches. The accusers gestured gleefully, with outstretched fingers at those who they had declared not worthy of remaining at the event.

The audience was also happy to rebuke and chastise the legitimate grievances of those who spoke out. As Marc Lamont Hill began a drawn-out tirade regarding the illegitimacy of the “occupation” and said that it was difficult for him to renounce Hamas, someone in the audience yelled that such talk was dehumanizing people. She was met with hoots of disdain from the crowd. When someone shouted out “Am Yisrael Chai” in protest, the crowd began a chant of “remove them!”

An older man who told Hill that his “rhetoric is killing people” was shouted down with shushes and loud cries of “no one cares!” He too was carted off.

People in the audience who tried to counter the ugly narrative on display were denounced by their neighbors, who gladly pointed them out to the police as if they were witches.

What is one to make of this UMass event, sponsored by a total of eight of its departments? For my part, I felt sorrier for the university and its students than I did about the unfair treatment that Israel received from the propagandists on the stage. The Jewish State has survived far worse than this ridiculously one-sided panel discussion in leafy New England. But it’s hard to see how UMass will continue as a viable academic institution if it continues to sponsor this kind of political theater.  Sooner or later parents will choose to send their kids elsewhere, where viewpoint diversity is valued and taught.