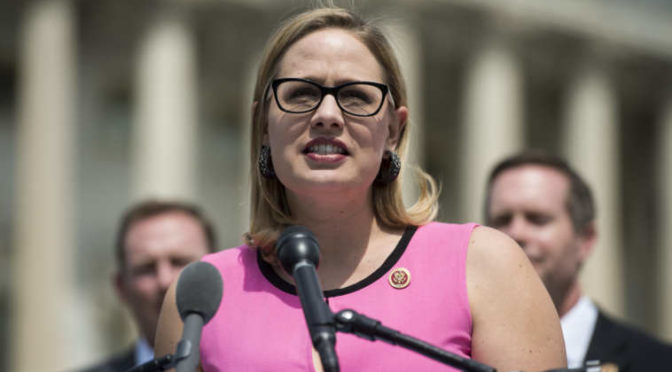 Dem Senator from Arizona May Face Censure Vote from State Party for Voting With Republicans: Report

The Democratic senator from Arizona may be facing retribution from her own party after voting for President Donald Trump‘s agenda in the upper chamber.

A new report published on Tuesday revealed that Sen. Kyrsten Sinema (D-Az.) could be facing a censure vote by the progressive wing of the state’s Democratic Party “for failing to support the tenets of the 2016 Democratic Party Platform.”

The resolution calling for the Arizona Democrat’s censure lists several instances where she has sided with her Republican colleagues in the Senate, such as supporting the confirmation of Attorney General William Barr.

The state Democratic Party also targeted Sinema for being the “sole Senate Democrat to fail to co-sponsor the Save the Internet Act” and for voting to confirm Trump’s Interior Secretary pick, David Bernhardt.

The resolution also claimed that Bernhardt “continues to lobby for the industries he served prior to his nomination by President Trump.”

The state coordinator for the Progressive Democrats for America, Dan O’Neal, told the Arizona Republic that the progressive caucus backs Sinema and wants to see her “succeed,” but said that the senator’s voting record is “really disappointing.”

“Here’s the thing: We really support Kyrsten Sinema, we want her to succeed, we want her to be the best senator in the country. But the way she is voting is really disappointing. We want Democrats to vote like Democrats and not Republicans.”

A spokeswoman for Sinema declined to provide a comment to the Republic.

O’Neal also told ABC15 that the caucus is “very concerned” with how Sinema is voting in the upper chamber and said that they wanted her “to vote like a Democrat” instead of throwing her hat behind some of the president’s policies.

“The Progressive Caucus is very concerned with Kyrsten Sinema’s voting record. We love her, as we love all Democrats, but we want her to vote like a Democrat rather than supporting Trump half the time,” said O’Neal.

Arizona Democratic Party Chairwoman Felecia Rotellini said that the resolution will be heard but is not sure it will pass. She also said that she does not see the potential censure as “an indication of a fracture” within the party.

She and O’Neal said the finalized language for the resolution is still being hammered out.

Congressional censures are a rare occurrence — the House of Representatives has only passed 21 of them in the institution’s history.

Late Sen. John McCain (R-Az.) was censured by the Arizona Republican Party in 2014 mainly for his votes on immigration reform.