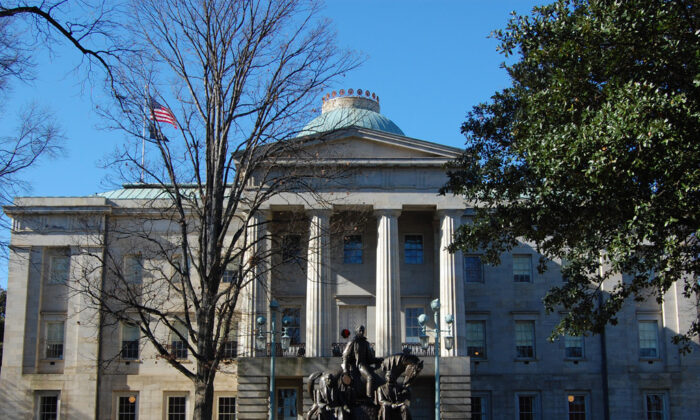 A North Carolina state court tossed the state’s 2020 congressional map after finding that Democratic Party voters would probably prevail in a lawsuit challenging the redrawn districts as examples of impermissible partisan gerrymandering.

It was unclear at press time if Republicans would appeal the ruling, which, if allowed to stand, could make it more difficult for the national GOP to take back control of the U.S. House of Representatives by making North Carolina congressional races more competitive.

The lawsuit was financed by the National Redistricting Foundation (NRF), a nonprofit founded by Obama-era U.S. Attorney General Eric Holder, the only sitting cabinet member ever to have been held in contempt by a chamber of Congress. The NRF and its affiliated nonprofits are targeting electoral maps in battleground states in hopes of tilting the playing field in favor of Democrats in time for next year’s elections.

“For nearly a decade, Republicans have forced the people of North Carolina to vote in districts that were manipulated for their own partisan advantage,” Holder said in a statement after the ruling.

“Now—finally—the era of Republican gerrymandering in the state is coming to an end.”

“With judges deciding behind closed doors how many Members of Congress from each party is acceptable, judicial elections have become the most consequential in America,” he said in a statement.

The state court ruling seems to fly in the face of federal jurisprudence, coming after the Supreme Court ruled against North Carolina Democrats on June 27, ruling 5–4 in Rucho v. Common Cause that their challenge in federal courts to their state’s congressional map raised nonjusticiable political questions. The high court held, in effect, that the privilege of redrawing state electoral maps was a fruit of electoral victory that courts should not abridge.

The majority opinion, written by Chief Justice John Roberts, left the North Carolina electoral map in place, which favors Republicans, as well as the Maryland electoral map, which favors Democrats. But Roberts left the door open for the states and Congress to address the issue of gerrymandering.

In the case at hand, cited as Harper v. Lewis, a three-judge panel of the Superior Court in Wake County issued a preliminary injunction Oct. 28 blocking preparations for elections from going forward using the state legislature-approved congressional map from 2016, beginning with primary elections that had been scheduled for March 3, 2020.

Judges Paul Ridgeway, Joseph Crosswhite, and Alma Hinton found unanimously that if the injunction were denied, “the people of our State will lose the opportunity to participate in congressional elections conducted freely and honestly to ascertain, fairly and truthfully, the will of the people.”

Claims such as those advanced by the plaintiffs “fall within the broad, default category of constitutional cases our courts are empowered and obliged to decide on the merits, and not within the narrow category of exceptional cases covered by the political question doctrine,” they stated.

“[Extreme] partisan gerrymandering—namely redistricting plans that entrench politicians in power, that evince a fundamental distrust of voters by serving the self-interest of political parties over the public good, and that dilute and devalue votes of some citizens compared to others—is contrary to the fundamental right of North Carolina citizens to have elections conducted freely and honestly to ascertain, fairly and truthfully, the will of the people.”

The court “respectfully” urged the North Carolina General Assembly to redraw the districts in “an expeditious process … that ensures full transparency and allows for bipartisan participation and consensus to create new congressional districts.”

The same panel of judges arrived at similar findings on Sept. 3 in a separate case cited as Common Cause v. Lewis that dealt with state electoral district lines from 2017 that were drawn by the General Assembly.

In a sprawling, 357-page opinion, the judges found that the political question doctrine that prevented the U.S. Supreme Court from tearing up allegedly gerrymandered electoral maps for entire states did not tie their hands in matters related to state-level elections.

The panel ruled that “[in] all but the most exceptional circumstances, North Carolina courts are duty-bound to say what the law of this State is and to adjudicate cases on the merits.”

The state courts’ “duty to decide constitutional cases applies with full force in the redistricting context.”

The maps drawn by state officials “do not permit voters to freely choose their representative, but rather representatives are choosing voters based upon sophisticated partisan sorting. It is not the free will of the people that is fairly ascertained through extreme partisan gerrymandering. Rather, it is the carefully crafted will of the map drawer that predominates.”

“This case is the next step in Eric Holder’s drive to use judges to create a Democratic majority,” Berger said at the time.

“Thwarted at the U.S. Supreme Court, Holder has turned to state courts with Democratic majorities to, in his own words, ‘favorably position Democrats’ to game the redistricting process.”

Source: North Carolina State Court Orders Redistricting That US Supreme Court Did Not