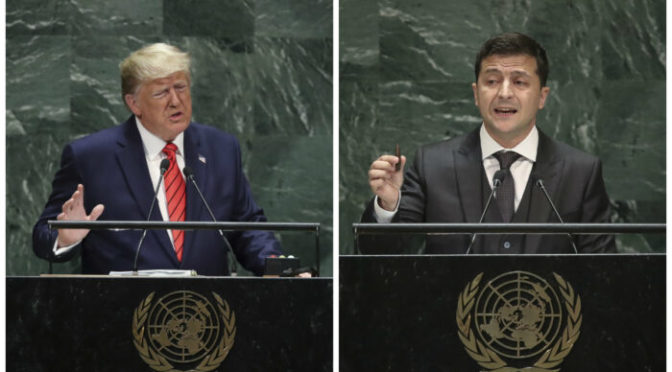 President Donald Trump released a rough transcript of the first call had with Ukrainian President Volodymyr Zelensky regarding his election win, inviting him to the White House, which happened months before another phone call between the two leaders that House Democrats have used as the basis of their impeachment inquiry into the president.

The April transcript didn’t contain any mention of former Vice President Joe Biden or his son, Hunter Biden. The younger Biden served on the board of a Ukrainian gas company while his father was in office.

The transcript shows that Trump agreed to meet Zelenksy at the White House with no preconditions. House Democrats have alleged that U.S. military aid to Ukraine was tied to a White House meeting along with investigations.

The 16-minute call is mostly genial and congratulatory. Zelensky invited Trump to attend his inauguration, and Trump suggested that his counterpart could visit the White House.

“When you’re settled and ready, I’d like to invite you to the White House,” Trump tells Zelensky in the call. “We’ll have lots of things to talk about, but we’re with you all the way.”

“Well, thank you for the invitation. We accept the invitation and look forward to the visit,” Zelensky responds. “Very good,” Trump says in return.

“We’ll let you know very soon, and we will see you very soon, regardless,” Trump says.

Zelensky has not visited the White House to date.

In the call, there is little talk about politics.

“That was an incredible election,” Trump tells Zelensky. “Again, thank you so very much. As you can see, we tried very hard to do our best. We had you as a great example.”

Trump adds: “I think you will do a great job. I have many friends from Ukraine and they think—frankly—expected you to win. And it’s a really amazing thing that you’ve done.”

Zelensky then asks if Trump could attend the inauguration.

Trump replies: “Give us the date and, at a very minimum, we’ll have a great representative.”

The White House noted that the release of the April transcript is an uncommon move for a president to make, highlighting the Trump administration’s transparency.

“The President took the unprecedented steps to declassify and release the transcripts of both of his phone calls with President Zelensky so that every American can see he did nothing wrong,” White House press secretary Stephanie Grisham said in a statement Friday.