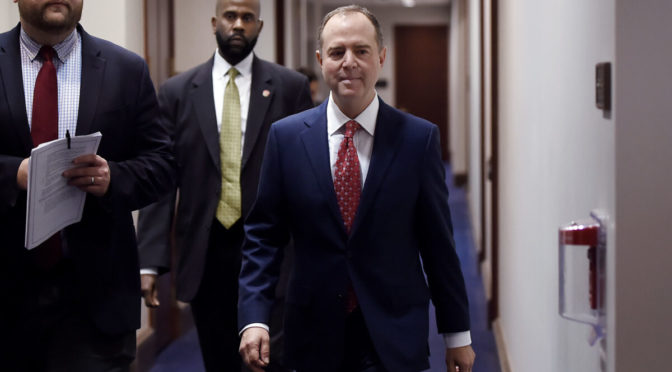 It was previously reported by the Washington Examiner that public records indicated Sean Misko, 37, started work on Schiff’s committee in August as a professional staff member. A specific start date was not available until this week when the latest congressional quarterly disbursements were released.

Misko was the director for the Gulf States at the NSC between 2015 until the first half of 2018. The Washington Examiner has established that the whistleblower is a CIA officer who was on the NSC during the Obama administration and worked on Ukrainian issues with Joe Biden, the 2020 Democratic candidate, when he was vice president.

Before joining the NSC, Misko worked in the Obama administration at the State Department for deputy chief of staff Jake Sullivan, who went on to become Hillary Clinton’s senior foreign policy adviser during her 2016 presidential campaign.

Both Ciaramella and Misko started their tenures during the Obama administration and left during the first year of the Trump administration. The Washington Examiner was told by a former senior White House official that both had a close, “bro-like” relationship while working at the NSC together.

A career CIA analyst with Ukraine expertise, the alleged whistleblower filed an Aug. 12 complaint with the Intelligence Community inspector general about the July 25 phone conversation between Trump and Zelensky.

The suspected whistleblower did this after meeting with a House Intelligence Committee aide on Schiff’s staff about the call, which is now the focus of impeachment proceedings. Before going to the Schiff aide, the whistleblower informed the CIA legal counsel’s office.

Schiff initially denied he knew about the complaint before it was filed in mid-August.

The identity of the Schiff aide who spoke to the whistleblower has not been made public, and it has not been confirmed until now that Misko was on Schiff’s staff at the time.

By Oct. 5, it was reported the whistleblower had never indicated to the inspector general he contacted Schiff’s office before filing the complaint against the president. Three days later, the whistleblower met with the inspector general to clarify why he did not mention his meeting with Schiff’s staff, saying he did not think that anything of “substance” was discussed.

The House Judiciary Committee is expected to proceed with its first hearing on Wednesday, and Georgia Republican Rep. Doug Collins, a senior member of the committee, wants to call Schiff as a witness to testify about what he knows about the whistleblower and the interactions his staff had with the whistleblower prior to filing the complaint.

During an interview on Fox News on Sunday, Collins said, “It’s easy to hide behind a gavel and Intelligence Committee behind closed-door hearings, but it’s going to be another thing to actually get up and have to answer questions about what his staff knew, how he knew, what he knew about the whistleblower report, his interactions he’s had with Ukraine, the other things that he’s had over time in this process.”

Neither Schiff’s staff nor Ciaramella responded to requests for comment.