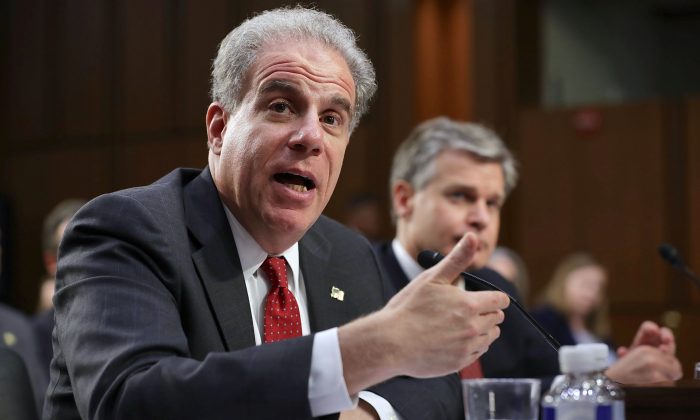 Open investigations of FBI employees by the Justice Department’s Inspector General (IG) have about doubled in recent years and, as far as available records go, there have never been so many investigations of this kind.

The Office of IG Michael Horowitz had 104 “open criminal or administrative investigations of alleged misconduct related to FBI employees” as of Sept. 30, according to its latest semi-annual report to Congress (pdf).

The number fell from 112 open investigations just six months earlier, but still fit into a heightened trend. In fiscal 2018, the IG reported 84 and 93 open investigations, respectively. In the decade before that, the average was a bit under 51.

It’s not clear what’s behind the increase.

In the past few years, the IG has worked on a number of high-profile investigations, including one into former FBI Deputy Director Andrew McCabe for a self-serving media leak and another into former FBI Director James Comey for disclosure of sensitive information.

In June 2018, the IG released a report on his review of the investigation into the purported mishandling of classified information by former Secretary of State Hillary Clinton. While the report criticized several FBI officials involved in the probe for political bias, it concluded that “we did not find documentary or testimonial evidence that improper considerations, including political bias, directly affected the specific investigative decisions we reviewed.”

Horowitz is expected to release on Dec. 9 his review of FBI actions to obtain a spying warrant on former Trump campaign aide Carter Page and the counterintelligence probe into several associates of Donald Trump. The warrant was in large part based on the Steele dossier, a collection of unsubstantiated claims about collusion between Russia and the campaign of then-candidate Trump.

The warrant was taken out by the bureau in the fall of 2016, was renewed several times, and remained active well into 2017.

The FBI officially opened a counterintelligence investigation into claimed Russian ties of four Trump associates on July 31, 2016. In 2017, the investigation was taken over by special counsel Robert Mueller, whose appointment was prompted by Comey’s release of sensitive information about his personal conversations with the newly elected President Trump.

Mueller released his final report in April, saying the investigation didn’t establish any collusion between Trump or his associates and Russian interference with the 2016 election.

In October, Page sued the Justice Department, saying his requests to review a draft of the IG report and other related records haven’t been met.

He also alleged that the department violated his privacy rights by sending copies of the surveillance warrant application to The New York Times before presenting him an opportunity to review the documents.

Former FBI attorney Kevin Clinesmith was reportedly referred for criminal prosecution by Horowitz for allegedly altering an email connected to the Page warrant.

Clinesmith was revealed by Rep. Mark Meadows (R-N.C.) as the “FBI Attorney 2” mentioned 56 times in the IG’s Clinton probe report.

On Nov. 22, 2016, Clinesmith’s supervisor, Sally Moyer, asked him in a message whether he’d rethought his “commitment to the Trump administration,” to which he replied, “[Expletive] no. Viva le resistance,” according to the report, which identified them as “FBI Attorney 1” and “FBI Attorney 2.”

Based on those designations, Clinesmith also lamented Trump’s win the day after the election, writing to another employee that he was “devastated” and couldn’t wait to “leave today and just shut off the world for the next four days.”

“Plus, my [expletive] name is all over the legal documents investigating his [Trump’s] staff,” he also wrote.