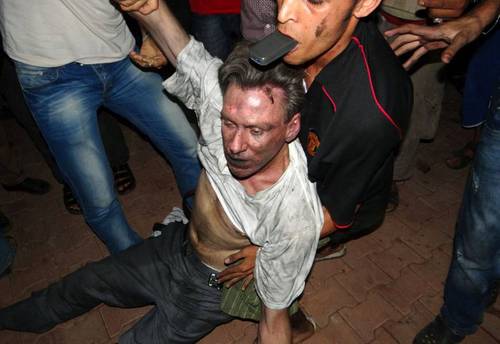 Just for the record, I have never trusted or had any respect for John Brennan. His actions for years are questionable, to put it mildly, and his voting for a Communist Party candidate should have been career-ending especially in the intelligence game. But because of political agendas, it wasn’t and here we are. Since President Trump has had John Brennan’s security clearance revoked, a number of high-powered individuals have come to his defense. But there are far more who agree with President Trump over this and notably, one well-known special ops hero is suggesting the former CIA director got what he deserves.

You remember Kris “Tanto” Paronto, the former Army Ranger and private security contractor who was part of the CIA team that fought back during the 2012 Benghazi terror attack. He’s impossible to forget and someone I admire a great deal. He’s flat out accusing Brennan of putting his “politics” before those in the field. And he did. “He is lucky the security clearance is all he is getting away with,” Paronto told Fox News in an interview on Friday. Frankly, in my opinion, Brennan should find himself in prison, but that’s just my take on it.

Paronto responded to a tweet from Brennan who laughably stated that his “principles are worth far more than clearances.” The Benghazi hero tweeted back a scathing rebuke, “My principles are greater than clearances too John, especially when you and the @CIA kool-aid drinkers punishes us for not going along with the Benghazi cover-up story in order to protect you, @HillaryClinton’s & @BarackObama’s failures. You put your politics before us.” Paronto was one of the authors of “13 Hours.” It was later turned into a feature film about the Benghazi terrorist attack. He stated that he and his team lost their security clearances for daring to speak out and tell what really happened that fateful day.

Security operators including Paronto previously had to sign non-disclosure agreements. I speak from experience here since I sign those a great deal of the time in my line of work. Those agreements were meant to silence those men to cover up what happened in Benghazi. Paronto told Fox News he signed three pertaining to Benghazi within a six-month period. Brennan told lawmakers in 2014 this was not a specific effort to prevent them from speaking to Congress. In my opinion, that was a bald-faced lie. Paronto claims he didn’t share classified information in telling the Benghazi story and continues to object to their clearances being revoked.

“Normally when you have a clearance suspended, you’re supposed to know why … I was never given that,” he said, blaming Brennan. “It was his determination whether we kept our clearances or not.” It was used as a weapon to shut these men up. Too bad it didn’t work as intended. Paronto also took exception with how his Benghazi team was treated when they returned to the U.S. “We come back from being on the ground to be treated as a second-class citizen. You come back and you’re called a liar,” Paronto told Fox News. “Brennan came in and there was no talk of ‘hey, good job guys,’ not that you look for it, but instead, it was ‘don’t say anything guys, we don’t want the truth to get out.’”

Paronto wasn’t done either. He shot back at Brennan on Twitter Thursday night, slamming him with accusations directly aimed at the former CIA director. “Or caught lying to congress OR caught spying on Pres. candidates OR caught using their positions to influence US elections OR caught fabricating stories about attacks on US personnel in Libya OR providing weapons to ISIS backed militias in Syria ..should I go on @JohnBrennan?” Nice to see someone call Brennan out for his treachery. Respect.

Then the either complicit or severely misguided leaders in the intelligence community lined up to defend Brennan. They called President Trump’s decision to revoke his security clearance “ill-considered and unprecedented.” I read yesterday that a dozen former intelligence officials signed a letter stating that sentiment. “The president’s action regarding John Brennan and the threats of similar action against other former officials has nothing to do with who should and should not hold security clearances—and everything to do with an attempt to stifle free speech,” the letter read. “As individuals who have cherished and helped preserve the right of Americans to free speech—even when that right has been used to criticize us—that signal is inappropriate and deeply regrettable,” they wrote.

“Another senior official, William McRaven, who was commander of U.S. Joint Special Operations command from 2011 to 2014 and oversaw the Navy SEAL raid in Pakistan that killed Usama bin Laden, penned an op-ed for the Washington Post Thursday, urging Trump to “revoke my security clearance, too.”

“McRaven called Brennan “a man of unparalleled integrity,” and said he would “consider it an honor” to have his security clearance revoked and add his name to “the list of men and women who have spoken up against your presidency.”

“’If you think for a moment that your McCarthy-era tactics will suppress the voices of criticism, you are sadly mistaken,” McRaven wrote. “The criticism will continue until you become the leader we prayed you would be.”

“’I have nothing but respect and love for ADM McRaven. Yes, I’ve seen this. We simply disagree,” O’Neill tweeted with a link to McRaven’s op-ed.

“But O’Neill reserved a Twitter burn for former Obama foreign policy adviser Ben Rhodes, who touted the ex-CIA director’s involvement in the killing of the 9/11 mastermind in 2011.

“’John Brennan was the point person for the Obama White House on the operation that killed Osama bin Laden. He knows a lot more about defending our nation than someone who uses security clearances to punish his political adversaries,” Rhodes tweeted.

“O’Neill responded: “Actually, @brhodes, 23 conservatives went after UBL. No offense, in case you were wondering.’”

Some of those men I actually respect, but as O’Neill states, I respectfully and forcefully disagree with them here. Rand Paul calls Brennan a national security threat and I agree. Paul also says Brennan leaked the name of an operative in Yemen and I believe Paul was instrumental in getting Trump to revoke his security clearance. It was long past due.

Paronto is right about Brennan’s covering things up and silencing people to protect politicians and their agendas. I hope that President Trump yanks a lot more security clearances for others that have betrayed the trust of Americans and their offices, as well as their duty to uphold the law.