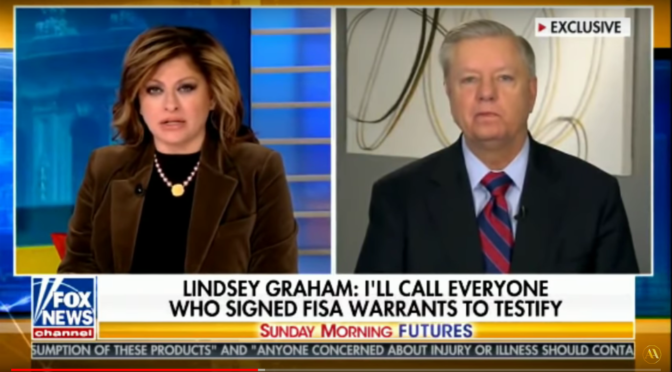 Senator Graham does a good job explaining the fraudulent visible reasons, purposes and strategy for establishing the House obstruction article; however, Graham completely overlooks the hidden motive for withholding it/them.

Moving to “spygate” Bartiromo points out Special Counsel Mueller never investigated the “dossier”; however, Bartiromo misses that Rosensteins’ second scope memo in August 2017 specifically empowered the research of (ie. use of) the dossier for his probe.

*POINT: In my opinion, this is the reason why the DOJ (AG Bill Barr) will not release the scope memos…. Barr is protecting DAG Rosenstein and his good friend Robert Mueller.

Lindsey Graham goes on to discuss the background surveillance on the Trump campaign; and outlines questions he has and potential witnesses before his committee.  Pause for a moment in this part of Graham’s interview, and notice how the answer to every question is within the declassification documents we have discussed. We know where the answers are.

Amid the twists and turns many people have forgotten about the material congress asked President Trump to declassify a year-and-a-half ago.  Additionally there has been some material cited that just seemingly slipped away without follow-up.  Consider:

This was the original list from congress in the summer of 2018:

Additionally, since the 2018 list was developed, more information surfaced about the underlying material.  This added to the possibility of documents for declassification:

♦ The July 31st, 2016, Crossfire Hurricane counterintelligence operation originated from a scheme within the intelligence apparatus.  The CIA operation  created the originating “Electronic Communication” memo. Declassify that two-page “EC” document that Brennan gave to Comey.  [The trail is found within the Weissmann report and the use of Alexander Downer – SEE HERE]

♦ Did anyone question former DOJ-NSD (National Security Division) head John Carlin, and get his testimony about why he hid the abuse from the FISA court in October 2016; why the DOJ-NSD rushed the Carter Page application to beat NSA Director Admiral Mike Rogers to the FISA court; and why did John Carlin quit immediately thereafter?

♦ The Carter Page FISA application (October 2016) was fraudulent, and likely based on deceptions to the FISA Court. Declassify the entire document, and release the transcripts of those who signed the application(s); and/or depose those who have not yet testified. The creation of the Steele Dossier was the cover-up operation. [SEE HERE]  What version of the FISA application will be released (if at all)?

♦ Release all of the Lisa Page and Peter Strzok text messages without redactions. Let sunlight pour in on the actual conversation(s) that were taking place when Crossfire Hurricane (July ’16) and the FISA Application (Oct ’16) were taking place.  The current redactions were made by the people who weaponized the intelligence system for political surveillance and spy operation.  This is likely why Page and Strzok texts were redacted!

♦ Release all of Bruce Ohr 302’s without redactions.  And FBI notes from interviews and debriefing sessions, and other relevant documents associated with the interviews of Bruce Ohr and his internal communications. Including exculpatory evidence that Bruce Ohr may have shared with FBI Agent Joseph Pientka. [And did anyone get a deposition from this Pientka fella?] Bruce Ohr is the courier, carrying information from those outside to those on the inside.

Yes it is good the FISA investigation report was released on December 9th. However, if all the underlying documents are not declassified; exactly as CTH has warned for over a year; the information therein is now subject to interpretation and/or manipulation.

There is a lot of material the public is aware of; and if the DOJ IG doesn’t release the underlying material then what exactly was the purpose of AG Bill Barr asking President Trump for the declassification authority?…..