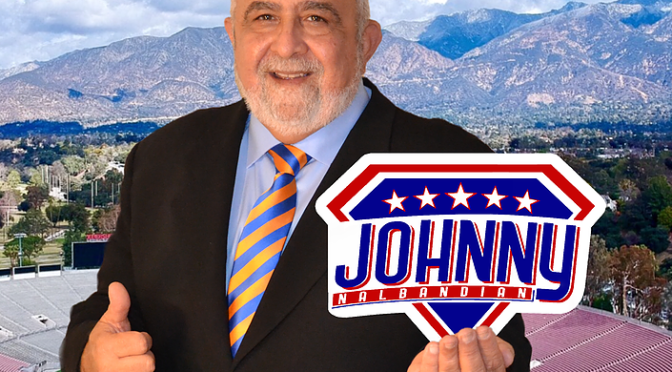 In a dog eat dog world the game of politics just got a lot harder for anybody brave enough to venture into doing their civic duty and sacrificing their careers and life to public service. There is no question the pool of unAmerican representatives that are swirling throughout our government is unprecedented and we may never tread water from this attack on morality, decency, Constitutionality and respect for our laws and each other.

If you are tired of the roughshod behavior from liberal progressives, Do Nothing Democrats and the liars whose intent is only to resist conservatism, then get in the game, #VoteJohnnyNalbandianForCongress in CA27th District! Stick with the folks you know who have stood strong in their love and belief in America and American Excellence! Vote for those who will support the President’s agenda and not waste taxpayer dollars or time fighting him at every juncture! Donate, donate. donate if you can.

2020 is more important than any other election because we are fighting to “Save America” from the socialist democrat party, from communists perpetrating our colleges and universities, from the brainwashed millennials who were never taught about America’s achievements, the Constitution, Civic Duty, pride in America – oh no the masses have been indoctrinated into thinking America is bad and so are we.

That is disgusting on it’s face, not true and I will continue to fight against this lie. I love this country – with all its warts – where we still continue to be the shining city of hope for the world and I will fight ANYBODY who tries to take it away or undermine her! The enemy is within. Just like Beatrice Cardenas who is a known liar, she wears the shame of traveling in the same pack as those who would tear us under. Shame them at ever point, every cross road. Let them know their ideas are contrary and have no place in the Republic of America. Tell them to go anywhere else because they do not belong here. If you love America you will not balk. Do you love America enough?

If so, then get out the vote in 2020, vote every Democrat out, vote out fake Republicans, vote in Conservatives. Get your friends, neighbors and family to the ballot box in the primary to #VoteRedOnly and then to the general election in November to vote for every Republican who supports America First! You must do your due diligence when voting in your own districts. Talk to the candidates, view their demeanor and the answers they give you when asking if they support President Trump, America, The Constitution, Sanctuary cities, the economy, jobs, morality, education, whatever is the most important issue in your part of the world, call them all on the carpet. It takes one phone call to each candidate to find out.

It is going to take every red blooded American to unite and purge this evil! Help the President Drain The Swamp! We can do this TOGETHER! As Americans there is nothing to stop us but ourselves! Get in the game! Fight back! Save America! This may be your last chance to do so! ~Tilt