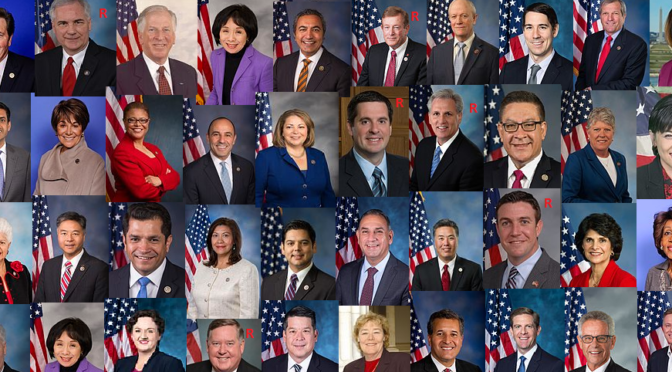 Please be forewarned. The complete lack of professionalism and the current dereliction of the House’s duties proves the leftist Democrats have completely lost their minds! Especially if they think the American people will not see right through their inability to do what is right! Their denial of due process for all sides along with their refusal to fulfill their duties as Representatives of their constituents, has failed miserably. The Democrats are incapable of doing their jobs and MUST be FIRED!

Guess What? It’s our turn now! This is the year to really drain the swamp and get rid of every single Democrat out of Congress! We need a working Congress, not a bunch of impudent children throwing dirt clods.

For these turncoats to actually accuse AG Barr of siding with President Trump as the left try to destroy the Executive Branch’s power without merit is ludicrous on it’s face! To attempt to sully the two men responsible for bringing down the filthiest, dirtiest, turncoat and traitorous Deep State swamp dwellers, including the Democrat Party from top to bottom reveals all we need to know about AG Barr, US Att. Durham and the now defunct lying cheating Democrat Party!

President Trump’s agenda: of following the rule of law; due process; allowing these traitors to expose themselves daily; and staying the course of Constitutionality, America has picked the right guy for the job. And then he picked the right guys for getting to the bottom of this perverse criminality permeating our entire”supposed” LawAgencies!! That is why the Democrats, leftists and progressives are so damn mad. The gravy train just jerked to a sudden stop and their crimes are being exposed! They know their days are numbered because there is an election this year and there are indictments that will be handed down. 2020 is going to be the year of a total expose of how and why Americans fell asleep at the wheel and why we must never let this happen again. Are you ready to step up?

Thank you to President Trump and all the Republicans who have stood up to these cowards who have lied to our faces so they can continue to take advantage of Americans! This is stopping now!

Prepare your ‘Pitchforks’ America! We are cleaning house in 2020! All hands on deck! The fight is right here, right now! Vote out every Democrat! Tell your neighbors, family and friends regardless if they don’t want to hear it! Your voice may be the ONLY voice they hear that is contrary to the Fake News they’re being inundated with. Tell them to turn off their t.v.’s that are dumbing them down! If they want the truth they’re going to have to do their due diligence to find it but at least you can point them in a direction.

For all the hard leaning leftists, just pass them by, they are incapable of listening because their hearts are too hate filled. Just move on to the moderates, the independents and those waffling! Most people really do want to know what’s truly going on but they will never get the truth on mainstream television! The internet is now the last bastion of free speech! Even in the face of total censorship of conservatives Americans are finding all kinds of ways to get out the truth. The ingenuity of this great country is alive and well and the left is not going to know what hit them when we dig in!

Do not sit idly by, get in the game! Every minute, every action counts! Together we will be VICTORIOUS! America First Forever! If we can’t help ourselves how the hell are we going to help others? We continue to be the one and only country who has defended all other countries with money and might! If we allow the Democrat Socialist Leftist’s to have their way, we will become a country with no vision and no clear path to Godliness.

There are still too many of us that will never stand down, and we can take the enemy within -out- simply by due process AND standing our ground until our last breath! It’s called civic duty and that’s how this Revolution will begin and end! Don’t let the legacy of the greatest country the world has ever known die in the darkness and chaos! Shine your light! Shout from the highest roof top ‘nobody is taking my country without a fight!’

Clear the air, shed your fears and step out into America, your country, your liberties and the hope for all people that one day humans will rise above their sins and egos to simply do the right thing because it is the right thing to do. How much do you love this country? What are you willing to do to honor and leave the legacy we were gifted, “in tact”, for generations to come? Let’s show them, shall we?

Multiple members of Congress on Friday sent a letter to Attorney General William Barr demanding that he and and United States Attorney John Durham resign. The six members of Congress claim the two men “inappropriately interfered in independent Department of Justice (DOJ) investigations and intentionally used your positions to mislead the American public in defense of President Donald J. Trump.”

Their argument focuses solely on the fact that Barr “handpicked” Durham to investigate the origins of the Russia probe. The goal of Durham’s investigation is to determine whether or not the probe was “lawful and appropriate.”

According to these members, Barr’s previous claims that the Trump campaign was spied upon is an “unfounded assertion” and was “inappropriate” because Inspector General Michael Horowitz was also completing his investigation.

“In the report released on on Monday December 9, the OIG concluded that the Justice Department acted within its jurisdiction initiating an investigation and that there was sufficient factual evidence to investigate the Trump campaign,” the leader said.

The group said Barr pushed “conspiracy theories” during an interview that took place on Tuesday, December 10 by suggesting that “the FBI under the Obama administration was a greater threat to our democracy than Russia.”

“Your uncorroborated and inappropriate statements on the OIG report legitimize fringe conspiracy theories and erode public trust in the in the Justice Department’s credibility,” the letter stated.

They claimed Durham’s investigation into the FBI’s work is nothing but a “sham” and took issue with how he “spoke openly about the investigation as it was ongoing.”

“Mr. Barr, your course of conduct makes clear your allegiances is to Donald Trump over the Department of Justice and the American people that you serve,” the letter said. “You are unfit to hold the position of Attorney General and your dedication to eroding public trust in our legal systems represents the antithesis of what a Justice Department official should be. Mr. Durham is equally as complicit in this mission and together your actions demonstrate that neither of you possess the integrity necessary to serve in the Department of Justice.”

“For those reasons, we demand your immediate resignation as Attorney General and that of U.S. attorney Durham,” the letter concluded.