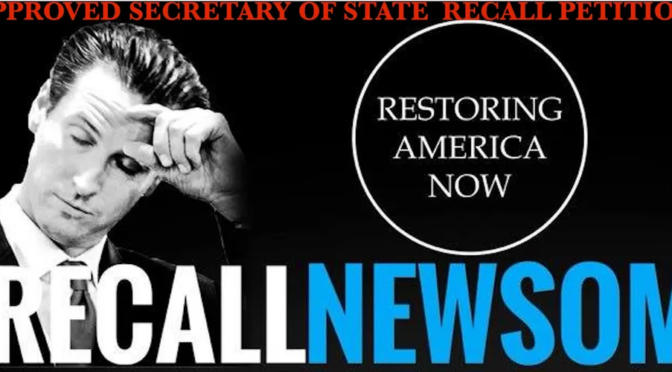 Get up off the couch!!  California needs you now! California is spiraling into the abyss while every single Californian should be up in arms, getting the petition (www.ranaf.org) to oust Governor Newsom out to family, neighbors and friends.  There are plenty of Patriots going out weekly getting signatures, go here to find out where and pay attention to your Facebook posts of new locations in your area every day:

FOLLOW THE VERY SPECIFIC INSTRUCTIONS THOUGH!!!  Go here to find out everything you need to know to make your signature count:

FYI when you go to print:

It was submitted as an 8.5” x 14” legal size document, and therefore all copies printed or photocopied must also be 8.5” x 14” or else they may be deemed invalid.

The grounds for the recall are as follows:

Over a decade of proven mismanagement of policies, public monies and resources, and lack of leadership have led to deterioration of California communities, poor schools, crumbling infrastructure, outrageous rise of costs from gas to utilities, mass housing crisis, frightening increase in homelessness, and insurmountable debt… all caused by gross mismanagement. Massive increased public safety risk by pushing forward laws and policies like Medicare for All or Universal Healthcare, and laws protecting and helping illegal aliens. Putting Californians and United States Citizens, including our veterans, last.

Gruesome Newsom is on a roll and making sure the citizens of this state pay for every one of his hair brained ideas meant only to line his and the ruling family’s pockets! He and his family are some of the most corrupt politicians in the nation and they have no plans to stop their tyrannical agenda! They would rather spend all your hard earned money they take to spend on illegals to undermine We The People, while you and yours live in squawler, no medical, no high paying jobs, no infrastructure, just a whole lot of nothing in a broken down dilapidated third world rogue state.

Maybe you’ve joined the thousands who have already left the state to make a better living anywhere else.  Good luck, we could still use your help though by calling your neighbors you used to know or family still living in California to remind them there are 38 days left.  Where California goes so does the nation, think about it.

So while Newsom, Pelosi, the Kamala’s, Maxines and Schiff lay waste to California, why haven’t you signed the petition yet?? What kind of Californian are you?  Our economy is in the tank while the rest of the nation is experiencing unprecedented monetary gains!  Do you care the nation is working and saving their new found income while Californians turn into sloths waiting for the state to be handed over to Mexico!

Who will stop them from finishing off the Golden State Forever?  You? Me? Us?

It’s going to take ALL OF US!

Drain the swamp in California FOR GOOD!

Stop the incestuous ruling class from enslaving generations to come!

Bring back America to California! Bring back God To The Golden State!

Together Let Us Pray We Find The Strength to Smite the Evil Within.  Do not let California sink into the abyss. Fight for her!