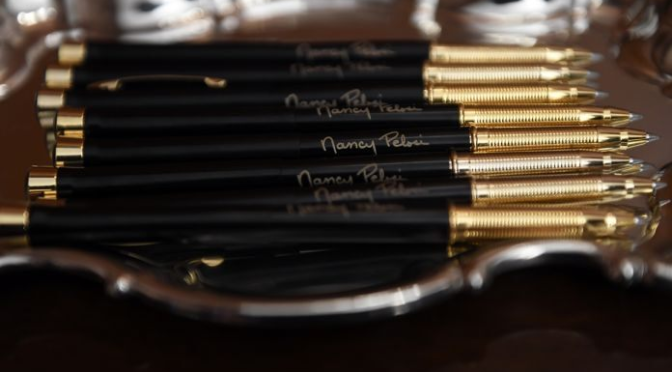 The White House said Saturday in a formal response to Democrats’ impeachment case that the articles of impeachment “must be rejected” by the Senate because they fail to allege any actual crimes by President Trump and they represent a “dangerous attack” on Americans’ right to vote.

In a written response to a legal summons issued by Democrats at the start of Mr. Trump’s trial, the White House stated: “The articles of impeachment submitted by House Democrats are a dangerous attack on the right of the American people to freely choose their president.”

“This is a brazen and unlawful attempt to overturn the results of the 2016 election and interfere with the 2020 election, now just months away,” the document said. “This highly partisan and reckless obsession with impeaching the president began even before his election and continues to this day. President Trump categorically and unequivocally denies each and every allegation in both articles of impeachment.”

White House Counsel Pat Cipollone and Trump personal lawyer Jay Sekulow argue in their answer to Congress:
“In order to preserve our constitutional structure of government, to reject the poisonous partisanship that the Framers warned against, to ensure one-party political impeachment vendettas do not become the ‘new normal,’ and to vindicate the will of the American people, the Senate must reject both articles of impeachment.”

The impeachment trial of the president will begin on Tuesday, with senators ultimately deciding whether to remove Mr. Trump from office. House Democrats impeached the president last month over his withholding of military aid to Ukraine in an alleged effort to pressure Ukraine’s president to announce a corruption investigation involving Democratic presidential candidate Joseph R. Biden and his son, Hunter.

The president’s top lawyers said nothing in the articles of impeachment “could permit even beginning to consider removing a duly elected president or warrant nullifying an election and subverting the will of the American people.”

The president’s lawyers say House Democrats “sought testimony from a number of the president’s closest advisors despite the fact that, under longstanding, bipartisan practice of prior administrations of both political parties and similarly longstanding guidance from the Department of Justice, those advisors are absolutely immune from compelled testimony before Congress related to their official duties.”

“As the Supreme Court has recognized, the president’s constitutional authority to protect the confidentiality of executive branch information is at its apex in the field of foreign relations and national security,” they wrote.

Sources close to Mr. Trump’s legal team said Saturday that the president’s lawyers will begin their side of the case by attacking the two articles of impeachment —abuse of power and obstruction of Congress — as defective, in part because Democrats failed to identify any crimes committed.

“It fails on its face to state an impeachable offense and alleges no crimes at all, let alone ‘high crimes and misdemeanors’ as required by the Constitution,” the source said. “In fact, it does not allege any violation of law whatsoever.”

He said of the impeachment articles, “They are the product of invalid proceedings that flagrantly denied the president any due process rights. They rest on dangerous distortions of the Constitution that would do lasting damage to our structure of government.”

The White House’s written response addresses the two phone calls that Mr. Trump had with Ukraine President Volodymyr Zelensky last year, stating that Mr. Trump did nothing improper in either conversation.

The answer from the White House states that Mr. Trump acted with “unprecedented transparency” in declassifying the transcript of a July 25 phone call with Ukraine’s president, and was working with full and constitutional legal authority in the national interests of the U.S.

The Government Accountability Office said Thursday that Mr. Trump violated federal law by temporarily withholding the $391 million from Ukraine after Congress approved it and he signed it into law.

But sources close to Mr. Trump’s legal team dismissed the GAO finding as irrelevant, noting that Mr. Trump eventually did release the aid to Ukraine.

“The aid was released, and it was released before the deadline,” the source said. “We’re on strong legal footing. The president’s done nothing wrong.”

The president’s response asserts that House Intelligence Committee Chairman Adam B. Schiff, California Democrat, “created a fraudulent version of the July 25 call and read it to the American people at a congressional hearing, without disclosing that he was simply making it all up.”

By approving the articles of impeachment, the president’s lawyers wrote, “the House violated our constitutional order, illegally abused its power of impeachment, and attempted to obstruct President Trump’s ability to faithfully execute the duties of his office.”

Mr. Cipollone and Mr. Sekulow will give opening presentations after the House impeachment managers finish their side of the case.

Mr. Starr’s report to Congress in 1998 on Mr. Clinton’s actions argued that he improperly invoked executive privilege while lying under oath about a sexual relationship with a White House intern. Now, Mr. Starr will be defending Mr. Trump’s assertion of executive privilege.

A source close to the president’s legal team said that Mr. Clinton’s actions were “markedly different than what the allegations are here.”

“Bill Clinton was asserting executive privilege over private conduct,” this person said. “This is markedly different, and I think that’s a clean distinction.”