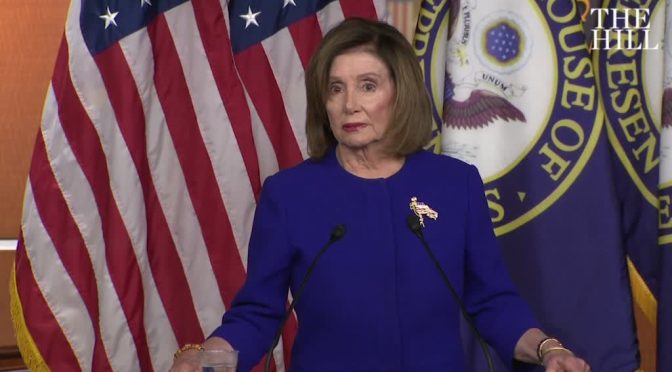 Source: How the House destroyed its own case for the Trump impeachment | TheHill

“Situation quiet. The captain has been put away for the night.” The words from the movie “The Caine Mutiny” came to mind on Friday when House leaders announced that Speaker Nancy Pelosi would not move until next week in submitting the impeachment of President Trump to a Senate trial. While various Democrats have publicly grumbled about the delay, going into its fourth week, without any sign of success in forcing the Senate to call witnesses, Pelosi continued a strategy that could jeopardize not just any trial but the rules governing impeachment. Indeed, Pelosi may force the Senate into a couple of unprecedented but well deserved rulings.

From the outset, the ploy of Pelosi withholding the House impeachment articles was as implausible as it was hypocritical. There was no reason why Senate Majority Leader Mitch McConnell would make concessions to get an impeachment that he loathed. More importantly, just a couple of days earlier, House leaders insisted that some of us were wrong to encourage them to wait on an impeachment vote to create a more complete record. Pelosi previously insisted that House committees could not pursue direct witnesses like former national security adviser John Bolton because there was no time to delay in getting this impeachment to the Senate. She then waited a month and counting to send the articles over to the Senate.

The delay now seems largely driven by a desire to preserve the image of Pelosi as a master strategist despite a blunder of the first order. Senator Dianne Feinstein expressed the frustration of many members in saying, “The longer it goes on, the less urgent it becomes. So if it is serious and urgent, send them over. If it is not, do not send it over.” But she and other members were quickly pressured to “correct” their earlier statements by stating the exact opposite and praising the brilliant strategy of Pelosi.

Perhaps the most pathetic change was House Armed Services Committee Chairman Adam Smith, who correctly stated, “At the end of the day, just like we control it in the House, Mitch McConnell controls it in the Senate. It does not look like that is going to happen. I think it is time to send the impeachment to the Senate and let Mitch McConnell be responsible for the fairness of the trial. He ultimately is.” It took just a few hours for Pelosi to get Smith to say that he “misspoke” and praise her inspired strategy.

Now what started as a demand to guarantee Senate witnesses has been downgraded to a demand to “know the rules” while waiting for the Senate to take a vote that it indicated weeks ago. In the alternative, sympathetic media figures insisted that Pelosi succeeded in “forcing a discussion” of Senate witnesses despite the fact that we had the same discussion in the trial of Bill Clinton without the House deciding to withhold the articles.

The fact is that Pelosi played into the hands of McConnell by first rushing this impeachment forward with an incomplete record and now giving him the excuse to summarily change the rules, or even to dismiss the articles. Waiting for the House to submit a list of managers was always a courtesy extended by Senate rules and not a requirement of the Constitution. By inappropriately withholding the articles of impeachment and breaking with tradition, Pelosi simply gave McConnell ample reason to exercise the “nuclear option” and change the rules on both majority voting as well as the rule for the start of trials. That is a high price to pay for her vanity.

It could get even worse for the House case. I previously discussed that the Senate had an excuse to simply declare that a trial will start next week and either the House will appear with a team of managers or the case will be summarily dismissed. McConnell is now moving toward a summary vote in the Senate, in light of the House failing to comply with its own procedural obligations. That is what happens when prosecutors defy a court and fail to appear for a trial. It is known as “dismissal for want of prosecution.”

The Senate also is faced with two threshold problems that could create lasting damage to this process. First, the obstruction of Congress count, as I previously discussed, raises a troubling position that a president can be impeached for going to the courts rather than turning over evidence, even when the House set a ridiculously brief period for an investigation. The Senate could summarily reject that article as making the request for judicial review into a high crime and misdemeanor while allowing little time for deliberation. Second, if the Senate agrees to the Democratic demand for witnesses, it invites future rush impeachments where the House sends woefully incomplete and inadequate cases and demands witnesses it never bothered to subpoena, let alone compel to appear.

The Senate is, therefore, caught in a tough position of enabling the House in such slipshod impeachments or refusing to hear witnesses who, unlike the witnesses called by the House, could have direct evidence to share on the allegations. One possibility is that, as in a real court, the Senate could allow witnesses but give the House a set trial schedule. If the House wants to belatedly go to court to try to enforce a subpoena, the Senate will hear the testimony of witnesses like Bolton when that expedited litigation is complete. However, it will not extend the trial schedule of the Senate.

Trials will usually last a fraction of the time of an investigation, but few investigations are as hurried or heedless as the House investigation was. The House wasted four months after the whistleblower complaint without issuing a subpoena to Bolton or Rudy Giuliani or others. Had it sought to compel such subpoenas, it would have had rulings from the courts by now. Indeed, it took only three months for the appeal over the Watergate tapes to be ruled on by the Supreme Court in the case of Richard Nixon.

The Senate could set a generous period for the trial of three weeks. That is in addition to the four weeks the House wasted on the poorly conceived ploy by Pelosi. If the House is ready to present these witnesses, they can be heard. But if those witnesses are not ready to testify due to ongoing litigation, they will not be called and the Senate will proceed to its verdict. In that way, future Houses are now on notice that it is in their interest to complete their records before sending an impeachment to the Senate.

It would send a message for future impeachments, as the author Herman Wouk wrote, “Remember this, if you can. There is nothing more precious than time. You probably feel you have a measureless supply of it, but you have not. Wasted hours destroy your life just as surely at the beginning as at the end, only in the end it becomes more obvious.” It is now obvious.

Jonathan Turley is the Shapiro Professor of Public Interest Law for George Washington University and served as the last lead counsel during a Senate impeachment trial. He testified as a witness expert in the House Judiciary Committee hearing during the impeachment inquiry of President Trump.