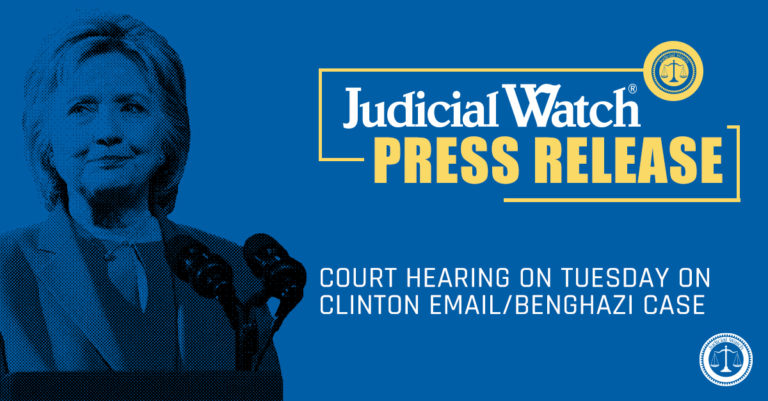 (Washington, DC) Judicial Watch today announced that a hearing will be held on Tuesday, June 2, by teleconference, in U.S. Court of Appeals for the District of Columbia Circuit regarding former Secretary of State Hillary Clinton’s efforts to avoid testifying, under oath, about her emails. Clinton’s former Chief of Staff, Cheryl Mills, also seeks to avoid giving testimony.

The appellate court is considering Clinton and Mills’ extraordinary request, known as a “petition for writ of mandamus,” to overturn an order issued by U.S. District Court Judge Royce C. Lamberth requiring them to testify.

Clinton argues she shouldn’t have to testify because she is a former, high level government official and that the case is moot because the FBI already tried to recover her emails from various sources when it investigated allegations that classified information was improperly stored or transmitted on the personal e-mail server she used at State. Judicial Watch argues neither Clinton nor Mills have demonstrated that they should not have to follow ordinary appellate rules to challenge the District Court’s order and that the case is not moot. Judicial Watch argues that the FBI’s effort was not exhaustive, as demonstrated by the discovery of some 30 additional Clinton emails late last year, among other developments, and that other emails may be recovered if State is required to look for them.

The hearing is in the U.S. Court of Appeals for the DC Circuit:

Location:        Telephonic, oral argument can be heard on the court’s website

This hearing comes in a Freedom of Information Act (FOIA) lawsuit that seeks records concerning “talking points or updates on the Benghazi attack” (Judicial Watch v. U.S. Department of State (No. 1:14-cv-01242)). In 2014, Judicial Watch uncovered “talking points” created by the Obama White House showing that statements about the attack made on the eve of the 2012 elections by then-National Security Advisor Susan Rice were misleading, if not false. This FOIA lawsuit led directly to the disclosure of the Clinton email system in 2015.

On March 2, 2020, Judge Lamberth granted Judicial Watch discovery that includes taking testimony from Clinton and Mills, under oath, regarding Clinton’s emails and the existence of records about the Benghazi attack. In April, Judicial Watch and the State Department, which is represented by Justice Department lawyers, filed responses opposing Clinton’s and Mills’ request to overturn the order requiring their testimony. The lower court found that Clinton’s testimony was necessary:

The Court has considered the numerous times in which Secretary Clinton said she could not recall or remember certain details in her prior interrogatory answers. In a deposition, it is more likely that plaintiff’s counsel could use documents and other testimony to attempt to refresh her recollection. And so, to avoid the unsatisfying and inefficient outcome of multiple rounds of fruitless interrogatories and move this almost six-year-old case closer to its conclusion, Judicial Watch will be permitted to clarify and further explore Secretary Clinton’s answers in person and immediately after she gives them. The Court agrees with Judicial Watch – it is time to hear directly from Secretary Clinton.

In December 2018, Judge Lamberth ordered discovery into whether Clinton’s use of a private email server was intended to avoid FOIA; whether the State Department’s intent to settle this case in late 2014 and early 2015 amounted to bad faith; and whether the State Department has adequately searched for records responsive to Judicial Watch’s request. The lower court also authorized discovery into whether the Benghazi controversy motivated the cover-up of Clinton’s email. It ruled that the Clinton email system was “one of the gravest modern offenses to government transparency.”