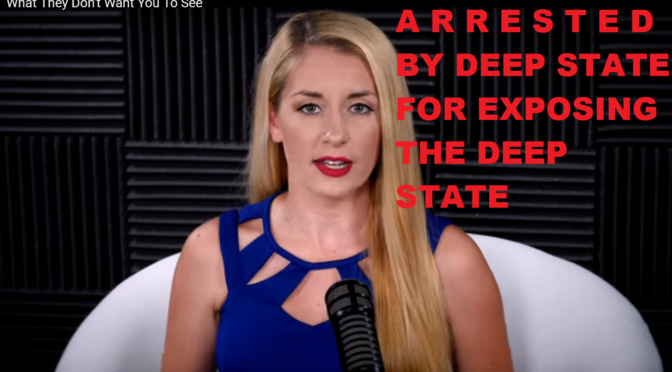 Movie was going viral with millions of views.

The Shadowgate documentary, which went viral after one of its producers was arrested on Friday, has now been removed by both YouTube and Facebook.

Journalist Millie Weaver was charged with alleged “robbery, tampering with evidence, obstruction justice, and domestic violence” after police officers apparently from a local SWAT team showed up at her Ohio home Friday morning and took her to the Portage County Jail in Ravenna.

The Portage County Sheriff’s Office later confirmed that there was a “secret indictment” against Weaver but refused to give further details.

A woman claiming to be Weaver’s mother later commented that there had been a family dispute over a $50 cellphone on April 25, but that she had almost immediately dropped all charges against Weaver and expressed shock that her daughter had been arrested.

The arrest occurred on the eve of Weaver releasing Shadowgate, a documentary that purports to expose the “operational role the shadow government played behind the scenes carrying out the coup against President Trump.”

After the documentary received millions of views following its upload to Facebook and YouTube, both websites censored the film, with YouTube claiming the movie violated its rules against “hate speech.”

The full Shadowgate documentary can still be seen below. https://api.banned.video/embed/5f37fcc2df77c4044ee2eb03

Weaver is expected to appear in front of a “tentative bond meeting” later today.

There is also a live protest against her arrest taking place in Ohio right now. https://www.youtube.com/embed/Fk2yQsTG58Y

Things are getting really ugly right now due to the Deep State being dismantled. However their network of spies and liars have yet to be completely expunged. They will continue to push their control over the planet but their days are numbered.

While being arrested, Millie Weaver was told a grand jury brought an indictment against her for burglary! What we know right now are the public documents viewed in the the second video below that are being displayed and scheduled for release today, were what the Deep State considered stolen documents.

WATCH: “What They Don’t Want You To See”