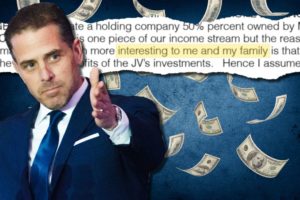 An email dated for May 13, 2017 obtained by Fox News features talk of “remuneration packages” for six individuals with a multi-million dollar deal with a Chinese energy company. The same email identified Hunter Biden as the “Chair / Vice Chair depending on agreement with CEFC.” CEFC China Energy Co. Ltd. is the Chinese energy firm founded by Ye Jianming, who held positions with the CCP and reportedly offered Hunter Biden $10 million a year for introductions alone.

The email in question features a note reading, “Hunter has some office expectations he will elaborate,” which reference “20” for “H” and “10 held by H for the big guy?” According to Fox News, one individual copied on the email confirmed the authenticity of the correspondence. Multiple sources, added Fox, said “the big guy” is in reference to Joe Biden, now the Democratic presidential candidate. In other words, Hunter Biden was serving as the conduit through which the Chinese businessmen closely related to the CCP would funnel money to the former vice president.

The bombshell revelation published less than three weeks until the November election comes days after the New York Post dumped its first round of reporting on content found on a Delaware computer. On Wednesday, the Post reported emails showing Joe Biden repeatedly lied when claiming he never spoke with Hunter, “or with anyone else,” about his son’s potentially criminal overseas business activity and even fat-shamed an Iowa voter for bringing it up. To the contrary, emails showed Hunter Biden actually introduced a senior advisor named Vadym Pozharskyi to his Ukrainian energy company, Burisma, to his vice president father.

“Thank you for inviting me to DC and giving me an opportunity to meet your father and spent [sic] some time together,” Pozharskyi, wrote.

Hunter Biden meanwhile, was raking in upwards of $50,000 a month in excess compensation despite no prior experience in the energy industry.

When asked about the explosive revelations first reported by the New York Post which had been previously dismissed by the mainstream media and censored across Facebook and Twitter, Biden condemned the reporting as a “smear campaign” before launching attacks at the press.

The hostile response follows 24 hours after the Democratic nominee sat through an entire town hall with ABC hosted by former President Bill Clinton’s White House Communications Director George Stephanopoulos where the news anchor refused to ask a single question about the biggest story to break of the fall campaigns.