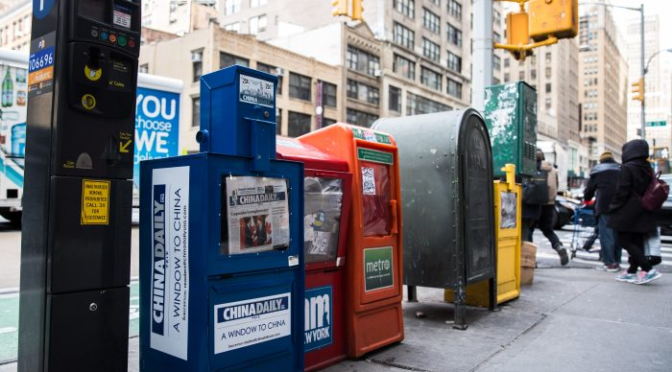 China-US News
Chinese State-run Outlet Continues Paying US Newspapers Millions to Publish Its Propaganda
By Li Hai
November 23, 2020 Updated: November 24, 2020
Print
China Daily, the Chinese regime’s propaganda outlet, has spent millions for the past six months on U.S. publications, according to its statement (pdf) filed last week with the Department of Justice under the Foreign Agents Registration Act (FARA).

According to the statement, China Daily’s overall expenses from May 1 to Oct. 31 this year were above $4.4 million, in which around $3.1 million was spent on printing, advertising, and distribution, and about $1.3 million for payrolls and other operating expenses.

The Wall Street Journal, Los Angeles Times, Foreign Policy, the Seattle Times are some of the notable receivers.
Los Angeles Times received $340,000 for advertisements and $111,501 for printing newspapers in the past six months. 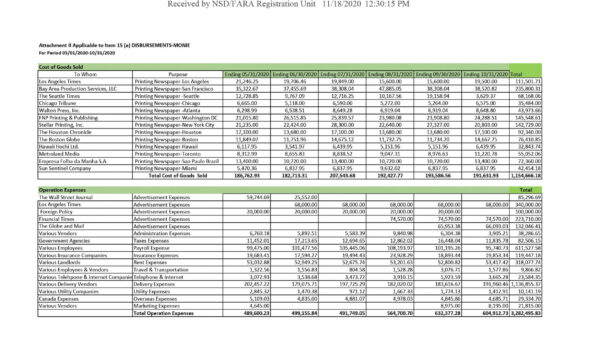 Over the past few years, China Daily has spent millions running supplements—called “China Watch”—containing propaganda disguised as news in major U.S. media outlets. These supplements are inserted as advertisements in newspapers or paid programs online.

However, scholars researching Chinese influence activities in the United States said in a 2018 report (pdf) that “it’s hard to tell that China Watch’s material is an ad.” 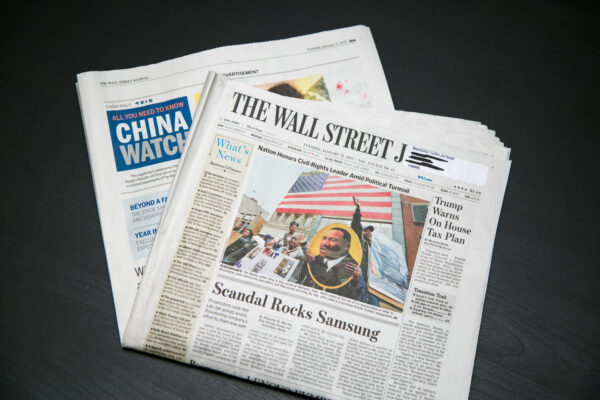 A paid insert of China Daily inside the Jan. 17, 2017 edition of the Wall Street Journal. (Benjamin Chasteen/The Epoch Times)

“[General Secretary Xi Jinping] said ‘Party-owned media must. . . embody the party’s will, safeguard the party’s authority … their actions must be highly consistent with the party,’ in short, while Western media are beholden to the truth, PRC media are beholden to the Chinese Communist Party,” Department Spokesperson Morgan Ortagus said in her statement in June.
China Daily’s previous financial filings (pdf) with the Justice Department showed that it paid more than $4.6 million to The Washington Post and nearly $6 million to the Wall Street Journal since November 2016. It also showed the outlet paid The New York Times $50,000 in 2018.

The Washington Post and The New York Times stopped running the advertising insert early this year.
The Wall Street Journal, Foreign Policy, and the LA Times didn’t immediately respond to requests for comments from The Epoch Times.

According to China Daily’s recent filing, for the past six months, its total subscription and advertisement income was only $123,700.56. However, the “Fund from Headquarter Office” was $4,416,133.35, accounting for about 97.3 percent of total income.
China Daily is headquartered in Beijing, China. It is owned by the Publicity Department, an internal division of the CCP (China Communist Party).