Source: Rush Limbaugh: Democrats “Recoiling in Fear” and “Quaking in their Boots” that Donald Trump Will Unleash a Bevy of Damning Classified Documents

Rush Limbaugh: Democrats “Recoiling in Fear” and “Quaking in their Boots” that Donald Trump Will Unleash a Bevy of Damning Classified Documents
By Jim Hoft
Published January 9, 2021 at 7:15am

Rush Limbaugh told listeners on Friday that Democrats are still petrified of Donald Trump and his ability to reveal all of their crimes before China Joe is inaugurated in 12 days.

Democrats are nervous that President Trump will release the documents that show how Democrats broke the law for years in their attempts to overturn the 2016 election. 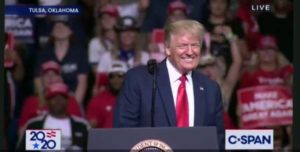 He hasn’t said he won’t do it again, whatever it is, and they’re gonna be like this — do you understand? — for the next 12 days. In case you missed it, Nancy Pelosi, according to top-of-the-hour propaganda on the radio from an EIB affiliate… Well, I’m assuming it’s radio. Yeah, ’cause our listeners would be listening to the EIB Network radio facilitate and local news or national news network.

Pelosi has called the military and put ’em on standby in case Trump launches the nuke codes. Who are we gonna nuke? The little pot-bellied dictator, Kim Jong-un? What are they terrified of? They’re terrified that Trump is gonna unleash classified documents. You know, he’s got a bevy of ’em, folks. He’s got classified documents about the hoax, the four-year coup.

They are scared to death — they are terrified — that Trump is gonna pardon people who are dangerous to the establishment. Call it the swamp if you want. Because let me tell you, nothing’s changed. The people in the Washington establishment, why did they want to stop Trump in the first place? Because they didn’t want what they have been up to (which is no good) for years to ever come out.

They didn’t want Trump to discover it and release it. They remain petrified for the next 12 days that Trump is going to release — somehow, some way — what he knows about these people. In other words, they’re worried to death that he’s got a card or two to play here yet, including the pardon power. They’ve got a lot of stuff to keep covered up.