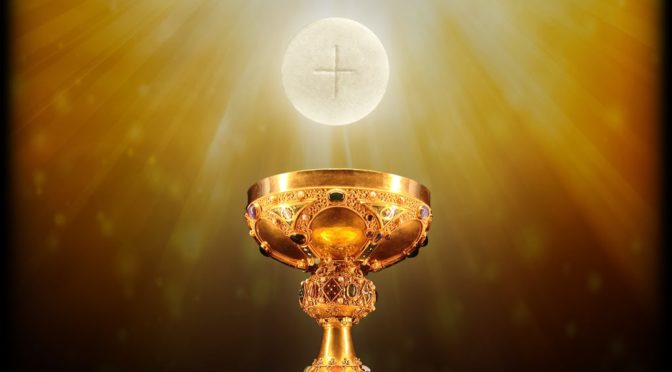 SIGN THIS PETITION TO DENY THE HOLY EUCHARIST TO JOE BIDEN

Cardinal Wilton Gregory said that he will allow politician Joe Biden receive Communion…even though Biden has often pushed pro-abortion and pro-homosexual policies. According to reports:

“Speaking to Catholic News Service — which is funded by the United States Conference of Catholic Bishops — Gregory… expressed his support for Biden’s wish to receive Holy Communion, despite being an ardent supporter of abortion. Jesuit-run America magazine reprinted the interview.” (Source: LifeSiteNews.com)

Over the years Joe Biden has done many acts and statements contrary to Church teaching, such as:

Supporting abortion “under any circumstance,” and his campaign called it a “Constitutional Right”
Officiating at a same-sex “wedding” as the vice-president;
Supporting the pro-transgender “Equality Act,” which would add the phrase “sexual orientation” and “gender identity” to the Civil Rights Act.
Promising to re-enter pro-abortion Paris Climate Agreement
Promising to force the Little Sisters of the Poor to provide contraception, and to overturn a transgender ban in the military (see below for more information)

It sends the message to the good that their fidelity to Church teaching makes no difference. It gives a false hope to the wicked that their bad positions are approved or are harmless. It is a serious public sacrilege that offends Our Lord and the Faithful. Please sign our petition to Cardinal Wilton Gregory, urging him to avoid scandal, and to maintain Church teaching.

Over the years Joe Biden has done many acts and statements contrary to Church teaching, such as:

Supporting abortion “under any circumstance,” and calling it a “Constitutional Right”

In an online forum, Joe Biden decried legislators trying to overturn SCOTUS’s Rov V. Wade, which ruled in favor of nation-wide abortion access. He further spoke against “extreme laws restricting women’s constitutional right to choice under any circumstance.” He goes on to affirm “As President, I will codify Roe v. Wade and my Justice Department will do everything in its power to stop the rash of state laws that so blatantly violate a woman’s protected, constitutional right [to abortion].” (Source: medium.com/@JoeBiden/my-statement-on-june-medical-services-vs-russo-6e903c5b1e7e)

Supporting the pro-transgender “Equality Act,” which would add the phrase “sexual orientation” and “gender identity” to the Civil Rights Act.

The Biden campaign has made it clear that it will support the “transgender” agenda by supporting the “Equality Act.” Among other things, this act would add “sexual orientation” and “gender identity” as a protected class to the Civil Rights Act.

Biden’s campaign spelled this out further: “On his first day in office, Biden will reinstate the Obama-Biden guidance … which will restore transgender students’ access to sports, bathrooms, and locker rooms in accordance with their gender identity [i.e. boys entering girls’ bathrooms, or vice versa].”(https://joebiden.com/lgbtq-policy/)

On November 4, Biden tweeted that he was going to re-enter the Paris Agreement: “Today, the Trump Administration officially left the Paris Climate Agreement. And in exactly 77 days, a Biden Administration will rejoin it.” (Source: https://twitter.com/JoeBiden/status/1324158992877154310)

Besides promoting radical “ecological” changes, the Paris Climate Agreement pushes for abortion and contraception as “a human right.”

“The agreement states, ‘Parties should, when taking action to address climate change, respect, promote and consider their respective obligations on human rights, the right to health, the rights of indigenous peoples, local communities, migrants, children, persons with disabilities and people in vulnerable situations and the right to development, as well as gender equality, empowerment of women and intergenerational equity.’

“As Voice of the Family pointed out, terms like ‘gender equality’ and ’empowerment of women’ may initially seem innocuous to many readers but experience has shown that these terms are often used to advance a dangerous ideology,’ like abortion and contraception. (Source: www.lifesitenews.com/news/biden-says-hell-join-pro-abortion-paris-climate-agreement-as-soon-as-hes-president)

Promising to force the Little Sisters of the Poor to provide contraception, and to overturn a transgender ban in the military

On July 8, 2020, the Supreme Court ruled that the Little Sisters of the Poor could not be forced to provide contraception to employers under the Obama-era Affordable Care Act.

Biden lamented the decision: “As disappointing as the Supreme Court’s ruling is, there is a clear path to fixing it: electing a new President who will end Donald Trump’s ceaseless attempts to gut every aspect of the Affordable Care Act.” He went on to state: “If I am elected, I will restore the Obama-Biden policy that existed before the Hobby Lobby ruling: providing an exemption for houses of worship and an accommodation for nonprofit organizations with religious missions.) (Source: https://www.foxnews.com/politics/biden-says-he-would-restore-pre-hobby-lobby-contraceptive-mandate-in-wake-of-little-sisters-ruling)

Added to this, Biden promised to overturn the “transgender” bans in the military: “Every American who is qualified to serve in our military should be able to do so — regardless of sexual orientation or gender identity…Biden will direct the U.S. Department of Defense to allow transgender service members to serve openly, receive needed medical treatment, and be free from discrimination.” (Source: https://joebiden.com/lgbtq-policy/)
https://www.returntoorder.org/petition/urge-cardinal-gregory-to-refuse-communion-to-pro-abortion-politicians/?pkg=rtoe1165es1