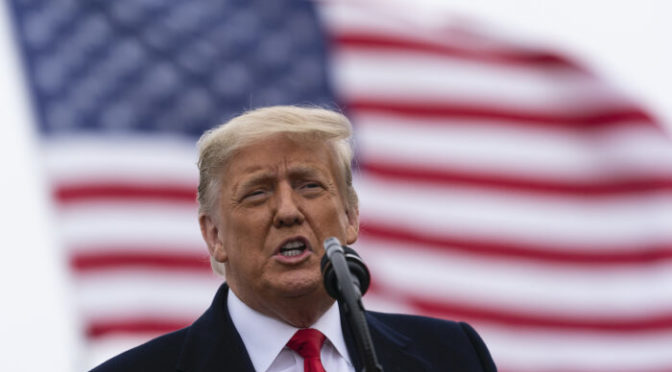 President Donald Trump didn’t campaign in 2016 on a promise to confront the global spread of communism, but his efforts over the past four years against the Chinese Communist Party (CCP), its proxies, and other elements of the communist specter have become the centerpiece of his legacy.

Viewed through this lens, the “America First” slogan was a fitting one for a campaign against a communist adversary and a medley of the causes it has co-opted in a decades-long campaign to supplant the United States as the most powerful nation in the world.

The CCP has spent decades plundering American wealth through the theft of trade secrets, protectionist trade policies, and market distortion. The regime has used this wealth to fund a behemoth soft power campaign, undermining U.S. interests in every domain and gaining influence over multinational institutions.

Despite significant interference from within his own government, Trump confronted the menace head-on in China, around the world, and in the United States. When he campaigned for reelection in 2019, communism versus freedom was one of the key themes, but the economic disaster and global havoc caused by the CCP virus, forced other priorities to the forefront.

Nevertheless, and despite little fanfare, Trump’s efforts against communism continued.
The CCP

The Trump administration confronted the CCP directly on several fronts, including by supporting Taiwan and Hong Kong, cutting off revenue streams from private firms tied to the People’s Liberation Army, and blocking the espionage threat posed by Chinese technology.

The administration defied decades-old protocols to begin normalizing relations with Taiwan, a Democratic republic that’s the antithesis of the repressive communist regime in Beijing. The CCP claims sovereignty over the island and has long played rough defense about the issue on the international stage.

In September last year, Keith Krach, the undersecretary of state for economic growth, led a delegation to Taiwan, becoming the highest-ranking State Department official to visit the island since 1979, when the U.S. government transferred diplomatic recognition to Beijing from Taipei.

The historic visit signaled the continuation of increasing support for Taiwan, in defiance of the CCP. The significance of the visit wasn’t lost on Beijing.

“We were greeted with fighter jets and bombers,” Krach said. Beijing breached Taiwan’s airspace at least 46 times during the week of his visit.

During the final days of the Trump administration, the State Department removed all “self-imposed restrictions” on contacts with Taiwanese officials, laying the groundwork for even closer relations with the democratic island.

Orlando Gutierrez Boronat, an author and co-founder of the Cuban Democratic Directorate, told The Epoch Times that Trump’s policy on Taiwan was monumental for the success of the nation’s democracy.

“I think the support for Taiwan was monumental in all terms: political, economic, military,” Boronat said. “The Republic of China is a longtime ally of the United States and there’s no reason why it should be treated any differently. They’ve been at the forefront of the struggle for democracy and freedom for decades, and what they’ve achieved in Taiwan is incredible to behold. As an achievement for humanity, his support for Taiwan is outstanding.”
CCP Virus

Considering Taiwan’s vehement opposition to communism, it may not be a coincidence that the island nation continues to experience miraculously low levels of the CCP virus, commonly known as the novel coronavirus. Despite a tourism industry that thrives on a massive number of visitors from the mainland, only seven people have died from the CCP virus in Taiwan since the outbreak of the pandemic. Circumstantial evidence suggests there’s a nexus between how close a locale has been to the CCP and the severity of the outbreak.

Trump’s response to and rhetoric around the virus has had a major effect on the perception of the Chinese communist regime around the world. The president dispensed with optics and banned travel from China on Jan. 31, 2020, less than two weeks after the first infection was confirmed in the United States. He has repeatedly referred to the virus as the “China virus” and lambasted the CCP for suppressing early warnings about the outbreak while locking down Wuhan internally and allowing international flights to leave the city, spreading the plague worldwide.
Rooting Out Trade-Secret Theft

On the home front, Trump’s Department of Justice initiated an unprecedented crackdown on the CCP’s trade-secret theft and related crimes. Then-Attorney General Jeff Sessions launched the effort, named The China Initiative, in late 2018. By February 2020, the FBI was conducting roughly 1,000 investigations into China’s attempted theft of trade secrets. According to a review of DOJ press releases, the department has brought more indictments related to Chinese infiltration of the United States since 2019 than during the entire eight years of the Obama administration.

“We believe that no country poses a greater threat than communist China,” FBI Assistant Director John Brown said in February 2020. “From our vantage point, the United States has not faced a similar threat like this since the Soviet Union and the Cold War.

“Today, investigations related to the government of China make up a greater percentage of our counterintelligence workload than at any other time in the FBI’s history.”
Cutting Off CCP-Linked Companies

The Trump administration targeted China’s so-called private firms, none of which are immune to direct influence from the CCP. U.S. officials have long warned that Chinese technology, both software and hardware, may be used by Beijing for spying, due to security laws that require companies to cooperate with Chinese intelligence.

The Trump administration banned purchases of equipment and software from some firms while prohibiting trade with a long list of others. The list of no-trade entities now contains hundreds of Chinese firms, many of which were blacklisted due to their ties to the People’s Liberation Army.

In a major financial blow to companies tied to the Chinese military, the Trump administration in late December strengthened restrictions on such firms by prohibiting U.S. persons from holding stocks in them.

“[The prohibition] ensures U.S. capital does not contribute to the development and modernization of the People’s Republic of China’s military, intelligence, and security services,” Secretary of State Mike Pompeo said in a statement.
Sanctioning Human Rights Abusers

The CCP has long been extremely sensitive about its abhorrent human rights record being exposed on the international stage. The Trump administration broke decades of silence on these abuses by sanctioning CCP officials responsible.

In July 2020, the United States sanctioned a CCP official involved in the persecution of Uyghurs, ethnic Kazakhs, and members of other minority groups in Xinjiang. On Human Rights Day in December, the State Department sanctioned an official involved in gross human rights violations against practitioners of Falun Gong, a meditation practice based on the principles of truthfulness, compassion, and forbearance. The sanctions, imposed on Xiamen Public Security Bureau Wucun Police Station Chief Huang Yuanxiong, marked the first time the United States took punitive action against the CCP in the more than two decades since the CCP initiated a brutal persecution on some 100 million Falun Gong practitioners in China.
Communism Around the World

The CCP’s influence has extended far beyond its official apparatus and private companies. By quitting multinational institutions such as the World Health Organization (WHO) and the United Nations Human Rights Council (UNHRC), the Trump administration sent a clear message that the United States won’t contribute to or participate in international organizations that have sacrificed their stated goals to cater to regimes such as the CCP.

Upon withdrawing from the UNHRC, Ambassador Nikki Haley called it “an organization that is not worthy of its name” because its membership includes notorious human rights abusers such as the communist regimes in China and Cuba. Trump said he withdrew the United States from the WHO because the CCP pressured the health organization to mislead the world about when the CCP virus was first discovered by Chinese authorities.

Through sanctions and other means, the president weakened other communist and socialist regimes, including Cuba, Venezuela, and Nicaragua. In some cases, the administration’s achievements in other parts of the world dealt a blow to the communist movement, even though they were never presented as such. In supporting Israel, for example, including by recognizing Jerusalem as its capital, Trump took a stand against the global anti-Israel movement, which is composed of communist and communist-allied regimes.

“The anti-Israel movement around the world is essentially communist,” Trevor Loudon, an expert on communist infiltration, told The Epoch Times. “When [Trump] stands for Israel, he is standing against communism because the main enemies of Israel are communist regimes or communist-allied regimes like Iran.”
USA

Trump stood up to decades of communist infiltration of the United States. While communism entirely abolishes private property and free enterprise, ballooning levels of taxation and regulation achieve the same goal over time. The president’s tax cuts and deregulation dealt a blow to the incremental encroachment of the government on people’s assets and businesses.

Lower taxes, combined with an executive order ensuring that regulations are slashed over time, triggered an economic boom in 2018 and 2019, leading to record-low levels of unemployment, rising wages, and a soaring stock market. With economic conditions improving, millions of Americans quit welfare programs, loosening the grip of the welfare state, the growth of which had previously brought the United States closer to socialism, which is itself a preliminary stage of communism.

The president proved to be a stalwart defender of tradition. He took action to promote religious freedom, restore respect for America’s founding principles, and defend the right to life for unborn children. At every step of the way, he respected the boundaries set by the Constitution, fortifying the document that has guaranteed American freedoms for hundreds of years. Many of the president’s executive actions were challenged in court. In each instance, he let the courts decide.

The president caused a seismic cultural shift by making it acceptable to talk about communism in the United States again by labeling his far-left opponents as socialists and communists. He threw down the gauntlet during the 2019 State of the Union address, telling Congress, with several self-identified Democratic socialists listening, that “America will never be a socialist country.”

The president carried the rhetoric over to his campaign rallies and Twitter feed, fueling a discussion about socialism at a time when the Democratic Party had taken a hard lurch to the left. President-elect Joe Biden’s platform was formed through a merger with that of Sen. Bernie Sanders (I-Vt.), a Democratic socialist. Biden’s first legislative proposal, a CCP virus relief measure, includes the $15 minimum wage mandate that Sanders has promoted for years.

In speeches before world leaders and ordinary Americans alike, Trump has condemned communism as a deadly menace. In a presidential message on the National Day for the Victims of Communism, he excoriated communism as an “oppressive ideology that, without fail, leaves in its wake misery, destruction, and death.”

“While Marxism promises equality, peace, and happiness, in practice, it results only in inequality, violence, and despair,” Trump said.

Cathy He, Mimi Nguyen Ly, and Jack Phillips contributed to this report.
Follow Ivan on Twitter: @ivanpentchoukov
Help us spread the truth. Share this article with your friends.