by Scott M. Greer Harriet Tubman’s dour face will soon appear on the twenty-dollar bill. Joe Biden’s administration recently announced it would speed up the process to make this happen. “The Treasury Department is taking steps to resume efforts to put Harriet Tubman on the front of the new $20 notes,”

Source: The Humiliation of the Harriet Tubman $20 – Revolver 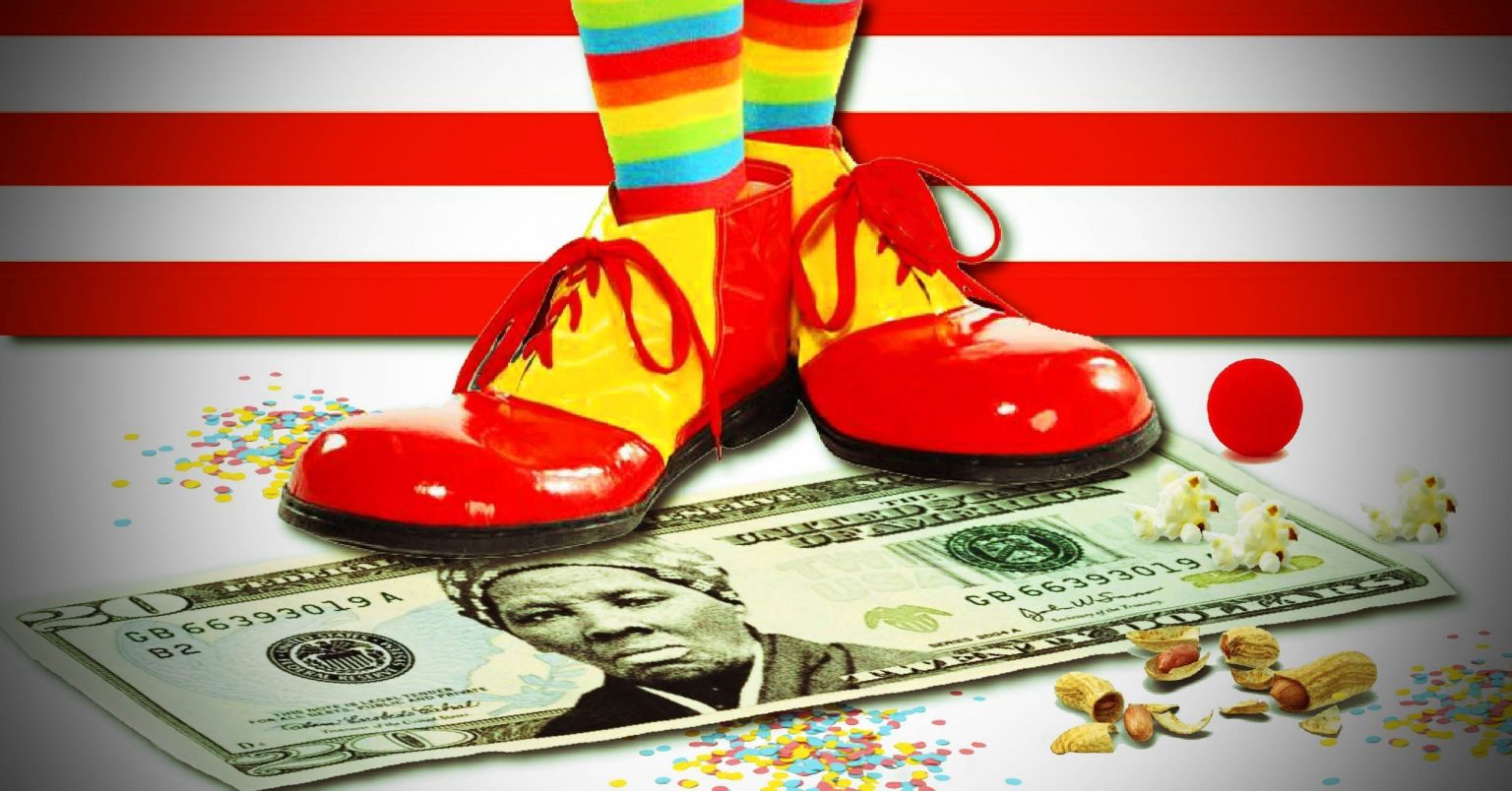 Harriet Tubman’s dour face will soon appear on the twenty-dollar bill. Joe Biden’s administration recently announced it would speed up the process to make this happen.

“The Treasury Department is taking steps to resume efforts to put Harriet Tubman on the front of the new $20 notes,” White House Press Secretary Jen Psaki stated. “It’s important that our notes, our money … reflect the history and diversity of our country and Harriet Tubman’s image gracing the new $20 note would certainly reflect that.” The Treasury Department supports the acceleration because Tubman is a “role model for leadership and participation in our democracy.”

Tubman will replace Andrew Jackson on the currency. Donald Trump stalled this process and opposed the seventh president’s removal. The new president doesn’t share his predecessor’s enthusiasm for Old Hickory. Jackson is one of the most consequential figures in American history. He was a war hero, a conqueror, a genuine populist who fought for the people against elite interests, and a great president. He embodied the hard-fighting Ulster Scots who settled the frontier and triumphed over Indian savagery. Outside of the Founders, hardly any Americans can claim more importance than Jackson. Harriet Tubman certainly can’t compare.

Prior to our woke era, Jackson was admired by a wide-array of Americans of all political persuasions. But Old Hickory is no longer honored because he’s white and “racist.” He owned slaves, killed Indians, and set in motion the Trail of Tears. That’s all NPC Americans, happy in their ignorance produced by public school propaganda, know him for. And they’re happy to see him go. Here’s one standard response on Jackson’s replacement by Tubman, courtesy of the Washington Post’s Paul Waldman:

Jackson was a notorious racist, a slaver who as president was responsible, among other things, for the Trail of Tears, in which thousands of Native Americans died as they were forcibly pushed west. Tubman, on the other hand, is one of the greatest heroes America has produced. [Washington Post]

Waldman doesn’t explain how Tubman was one of the greatest heroes America ever produced–the reader is just expected to know she is. The average person would say she helped free hundreds, maybe even thousands of slaves. She was a Union supersoldier who led daring raids on Confederate positions. And, not least of all, she supported women’s suffrage! Without Tubman, America may not be here today. Don’t ask why hardly anyone talked about her before the 1970s. That was simply the work racist white academics who tried to hide our real founders.

The Tubman legend, as even some honest lefty journalists and historians admit, is based on a lot of tall tales and exaggerations. When Tubman was first proposed as Jackson’s replacement in 2016, the Guardian gently tried to tamp down on the Tubman mythos. The liberal outlet cited the work of biographer Kate Larson to make its case:

Inflated figures about how many enslaved people Tubman rescued also seeped into the discussions. Citing Tubman’s own words, Larson that Tubman led about 70 enslaved people on 13 trips from Maryland to freedom, rather than 300 or 1,000 people, as is written. She also instructed about 70 more people on how to traverse the underground railroad. [Guardian]

Larson said misconceptions about Tubman had flourished in part because she was a “malleable icon”. As she was illiterate and unable to record her own history, little is definitively known about many details of Tubman’s life, Larson said.

This view is also shared by James McPherson, arguably the foremost expert on the Civil War era. He wrote in a 2004 New York Review of Books essay:

Many of the incidents of her life as a slave, as a fugitive escaping to freedom, and as the ‘Moses’ who returned repeatedly to lead others out of bondage are derived from her own testimony and often impossible to corroborate from other sources. Problems of evidence present formidable obstacles to biographers intent on sifting reality from myth. [New York Review of Books]

He writes of the many “anomalies” with Tubman’s story. While the legend claims she went into the depths of the Deep South, her own account says she only ventured into Maryland and nearly all of the 50-70 slaves she claimed to help escape were relatives. The illiterate Tubman claimed slaveholders offered thousands of dollars for her capture, but the only reward ever offered for her amounted to $100.

Tubman also suffered from some form of narcolepsy that resulted in her passing out at random moments for the rest of her life. These spells also resulted in her having “visions” of sorts. As McPherson describes it: “During these seizures she often experienced dreams or visions, even hallucinations, sometimes with powerful religious overtones—more than once she said that God had spoken to her.” This medical condition casts doubts on her own claims. It would’ve been very difficult for someone with this condition to successfully conduct dangerous slave escapes that left little time for sudden seizures. Some of her recollections of daring escapes could’ve been seizure-induced hallucinations.

One of the most popular legends about Tubman is that she commanded a black regiment’s raid in South Carolina that destroyed Confederate outposts and freed hundreds of slaves. This would’ve made her the first female to command such an expedition in American history. The problem is that it’s “wishful thinking,” according to Tubman biographer Miton Sernett. Sernett acknowledges she served as a nurse and scout for the Union, but was not a military commander. Sernett also argues that many of the famous quotes attributed to Tubman were not said by her. The retired historian says his thorough research led him to question much of what we claim to know about Tubman.

It gradually dawned on me that much of what we as Americans thought we knew about Harriet Tubman was not derived from good historical research but was a perpetuation of a larger-than-life story. The symbol had overpowered the life, had overshadowed the historical person.

Sadly, none of the real history will matter. The half-remembered propaganda millions of Americans learned in primary school will convince them Tubman was the greatest hero in American history–only HATEFUL bigots would challenge their myths.

Recently, I learned this lessons when I simply Tweeted the following:

Andrew Jackson is an important American historical figure, Harriet Tubman is not.

I was hit with all manners of angry replies. To my critics, Tubman is a Marvel superhero and everyone must believe this.

The funniest responses I received were those who claimed Tubman is important because their school said so. That was the entire argument. We can laugh at that claim but many Americans share it. Tubman is one of the most recognizable historical figures. The average American learns far more about her than Jackson, even though Jackson was far more important to America’s development.

Tubman’s elevation to the twenty-dollar bill is fitting after countless years of propaganda. NPC Americans believe the myth and they want it reaffirmed on our currency.

Unfortunately, Conservative Inc. celebrated this acceleration. A plethora of conservative pundits were outraged by Waldman’s assertion that they were upset by the change to the twenty-dollar bill. They even demanded that the Treasury put Tubman holding a gun on the currency.

I don’t know a single conservative upset about Tubman on the $20. (Although I share the right’s preference for the gun photo.) https://t.co/a7H2SVaeG0 pic.twitter.com/tt48NCfRFs

In 2016, many of these conservatives praised Tubman’s replacement of Jackson as a gun-toting Republican taking the spot of a racist Democrat. In reality, it’s just Con Inc. coping with another humiliation dealt to the historic American nation. Tubman’s elevation over a genuine American hero is yet another example of the war on America’s heritage. We can no longer honor our great figures because they’re too white and held views offensive to modern progressives. We replace them with marginal figures like Tubman to uphold liberal orthodoxy. Only idiots who write for National Review for a living would count it as a victory.

The significance of the Tubman twenty will be felt on a daily basis. When a heritage American picks up a twenty-dollar bill and sees Tubman’s grimace staring back at him, he’s reminded it’s not his country anymore. Like Andrew Jackson, he’s just another bigot waiting to be replaced.

Scott M. Greer is a proud alum of the Daily Caller, author of the acclaimed book “No Campus for White Men” and host the popular “Highly Respected Podcast.” You can find him on twitter at @ScottMGreer