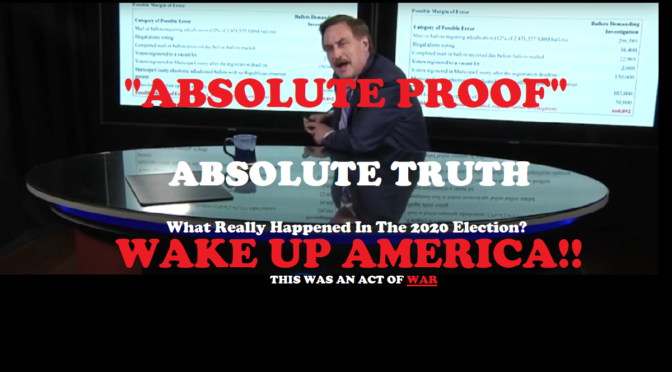 This premiered on Mike Lindell’s website the morning of 2/5/2021 and before the entire video could be shown the enemies of truth and justice cut the feed so that we the people who want the truth and honest elections could be denied our Constitutional Liberties from a Fraudulent Administration.

Contact your elected officials, email them a link to this video and demand that they watch it and educate themselves about ELECTION FRAUD then DEMAND that if they expect your vote in the upcoming elections they will fight ELECTION FRAUD with the same type of passion that George Washington had when he crossed the icy waters of the Delaware River.

Mike Lindell has done his part by spending his time and money to make this Documentary.

Now it is up to WE THE PEOPLE to do the rest!

Do not allow yourself to be discouraged and depressed, there is an information war that calls for you to enlist and do your part in preserving the freedoms that generations of veterans and our founding fathers fought for.

BE A DIGITAL WARRIOR WHILE YOU STILL CAN!
IF THEY TAKE DOWN YOU FB, TWITTER, YOUTUBE AND OTHER PLATFORMS DON’T QUIT. OPEN A NEW ACCOUNT AND KEEP FIGHTING. KEEP FIRING THE TRUTH AT THE LIES!
IF THEY TAKE YOUR 2ND DOWN OPEN A THIRD AND A 4TH AND A 99TH IF YOU HAVE TO