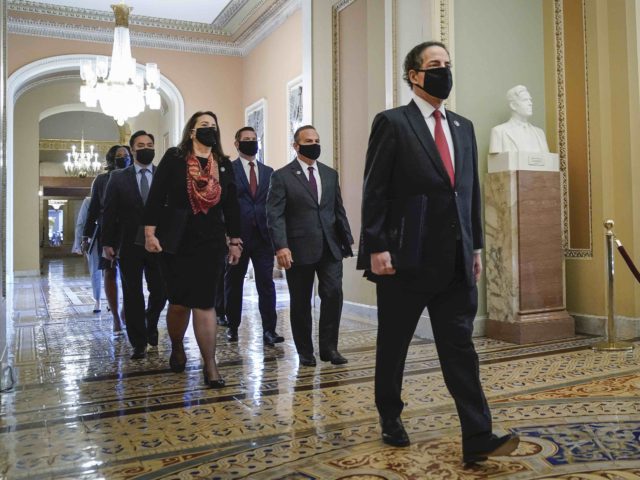 The House impeachment managers could not prove incitement — the central charge in the Article of Impeachment.

Then-President Donald Trump told supporters to protest “peacefully and patriotically.” No court could convict him on the facts.

So Democrats created a new standard. Trump is guilty of “inciting” the Capitol riot, they said, because he rejected the election, and he used provocative rhetoric for years.

But by that standard, Democrats would be guilty of “incitement,” too.

Democrats never accepted the result of the 2016 presidential election. Hillary Clinton “conceded” only in a formal sense. She and her deputies blamed “Russia collusion,” a conspiracy theory for which there was no real evidence.

The “Russia collusion” hoax undermined the peaceful transition of power, divided the nation, and led to violations of civil liberties. After it was debunked, neither the Democrats nor the media apologized for the hoax. Clinton, in fact, is still pushing it.

Moreover, Democrats have used provocative tactics — including violence — for years. In 2011, Democrats surrounded and occupied the Wisconsin state capitol to prevent Republicans from governing. That same year, they backed Occupy Wall Street, a lawless movement. In 2014, they embraced Black Lives Matter, which led to rioting and attacks on police. They did so again on a massive scale in 2020, as rioters burned cities, destroyed monuments, and attacked the White House.

For Democrats to judge Trump by their new standard of “incitement,” they would have had to admit that it was wrong to question the 2016 election, or to condone left-wing rioting.

But they could not. Just look at who is prosecuting Trump.

Lead impeachment manager Rep. Jamie Raskin (D-MD) objected to the certification of the Electoral College vote in 2017, hoping to prevent Trump from being declared the winner. He also vowed to impeach Trump as soon as he took office.

Fellow impeachment manager Rep. Joaquin Castro (D-TX), who lectured the Senate this week on the need to accept losing elections, pushed the “Russia collusion” hoax. He also “doxxed” Trump donors in his congressional district in 2019.

Their colleague, impeachment manager Rep. Ted Lieu (D-CA), claimed Trump was an “illegitimate” president in 2017. He also pushed “Russia collusion.” At one point, he had to apologize for mocking Trump for visiting tornado victims.

The problem with the Democrats’ “incitement” standard is that they have no credibility.

It took the Capitol riot for the Democrats to condemn political violence or to speak out on behalf of police or in defense of national monuments.

The new “incitement” standard is also too broad. It cannot be forbidden to raise questions about an election — especially in light of revelations in TIME about how a “secret” and “well-funded cabal” worked to change rules and suppress media.

The House impeachment managers told the Senators that if they did not vote to convict Trump by their new standard, there would be no accountability for the riot.

But if Democrats wanted accountability, they would not have put a trial before any investigation.

There would have been other ways to hold Trump accountable, such as a bipartisan inquiry to investigate what happened. The impeachment has poisoned future efforts to find out the truth and assign responsibility.

At one point, several Republican Senators walked out of the trial, after Raskin played clips from Trump rallies going back to 2015 to argue his supporters were violent, painting them as extremists.

They knew: if Trump is guilty of “incitement,” millions can be smeared as accomplices.

Democrats made clear that convicting Trump, and barring him from office, would blacklist a generation of conservatives.

Their case failed because they put Republicans on trial. Perhaps that was the point.

Joel B. Pollak is Senior Editor-at-Large at Breitbart News and the host of Breitbart News Sunday on Sirius XM Patriot on Sunday evenings from 7 p.m. to 10 p.m. ET (4 p.m. to 7 p.m. PT). He is the author of the recent e-book, Neither Free nor Fair: The 2020 U.S. Presidential Election. His recent book, RED NOVEMBER, tells the story of the 2020 Democratic presidential primary from a conservative perspective. He is a winner of the 2018 Robert Novak Journalism Alumni Fellowship. Follow him on Twitter at @joelpollak.
Source HERE.