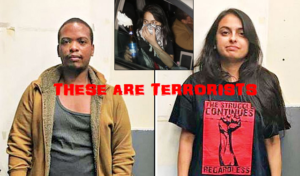 Though the Biden regime is hitting Capitol protesters with “conspiracy” charges and arresting people daily for merely stepping foot in the Capitol building, they’ve offered a plea deal to the two lawyers who torched a police van with a Molotov cocktail during a Black Lives Matter riot last year.

Though the terms of the plea deal haven’t been revealed, the pair were facing life in prison on charges of arson, conspiracy, use of destructive device, civil disorder, making or possessing a destructive device, and the use of explosives during a crime of violence.

The two lawyers charged with torching an empty NYPD van during a Black Lives Matter protest in Brooklyn last summer were offered a plea deal by federal prosecutors earlier this month, according to new court documents.

The suspects, Urooj Rahman and Colinford Mattis, were offered the unspecified deal on Feb. 11, according to a court papers filed Saturday by Brooklyn federal prosecutors.

Specifics about the proposed deal were not clear — nor was whether they accepted.

I guess their attack is a non-issue because it happened at night!

Biden’s AG nominee Merrick Garland: Antifa attacks on federal courthouse may not be domestic terrorism because they happened at night pic.twitter.com/zBzYrXQvx6
— The Independent Report (@independreport) February 22, 2021