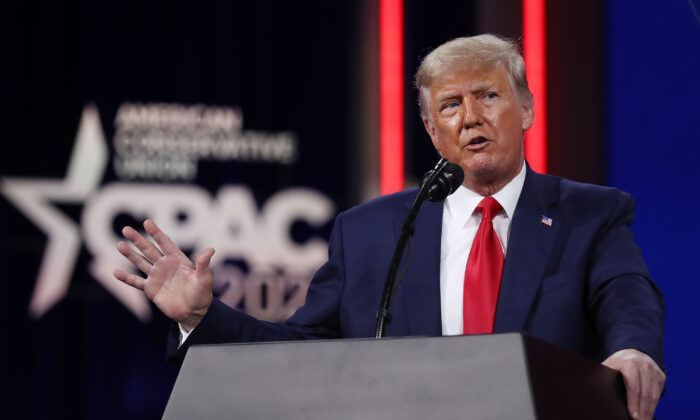 In a speech before the Conservative Political Action Conference in Orlando on Feb. 28, Trump instructed supporters to donate to his campaign website and the Save America political action committee (PAC). The move suggested Trump aims to build financial leverage over the RNC, a theory that seems to gain credence because of the cease-and-desist letters.

Calls placed to the RNC, NRSC, and NRCC on March 7 went unanswered.

As of the morning of March 7, the NRCC was still using Trump’s name in its standard messaging for new email list registrations. The home page of the NRSC advertised Trump t-shirts from its online shop.

“Stand with President Trump and House Conservatives,” the message said. “Show your support for President Trump’s fight against Nancy Pelosi and the radical Democrats, by giving a gift today.”

According to Rich Baris, the director of Big Data Poll, Trump’s instructions to donate to his website and PAC handed him leverage over the RNC, which may take a financial hit as a result.

“If he wanted to, he could basically bankrupt them into submission,” Baris told The Epoch Times. “I know there’s a lot of people in the Trump world who are rightfully angry with how the RNC raised so much money when they were jointly connected and did not appropriate it right or definitely didn’t appropriate it to the efforts that they said they would, like election integrity.

George Santos, a Republican running for Congress in New York, told The Epoch Times last week that bypassing the RNC for fundraising will send a message to the committee that they need Trump “more than they understand.”

“This is a great example of how he’s a more powerful individual than the party actually is, at this juncture,” Santos said.
Follow Ivan on Twitter: @ivanpentchoukov