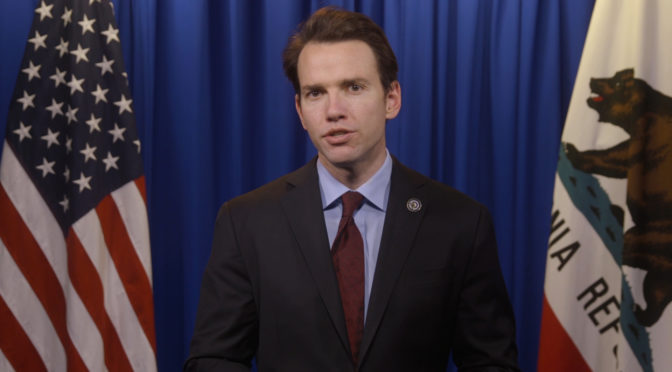 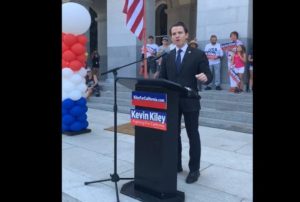 Source: Hope Is Calling in the Air at the Kevin Kiley for California Kick-off Rally – RedState

No theatrics. No live animals. No gender representations. No reasoned and polished political presentations. Only an inspired and rousing speech offered by the premier, grassroots candidate in the Recall Gavin Newsom race for Governor.

Assemblyman Kevin Kiley (R-06) held his kickoff rally for California Governor this morning, on the steps of the Sacramento Capitol. Just a little over two months to the year that the first Recall Rally and shutdown protest was held. Arrests were made on that day, and people’s civil liberties were violated. What Governor Gavin Newsom assumed would be a simple effort to quash unruly peasants, turned into a true grassroots movement that resulted in the collection of 2.1 million signatures to Recall Gavin Newsom, with 1.7 million being certified by the Secretary of State to place the Recall election on the ballot.

On Tuesday, September 14, 2021, Californians will be asked two simple questions: 1) Should Gavin Newsom Be Recalled? YES or NO. When the YES votes reach 51 percent or higher, then 2) Who should replace Gavin Newsom as California Governor?

Despite the gaslighting and incorrect information being floated around, once Question No. 1 has sealed Gavin Newsom’s removal, then Question No. 2 will require electing the candidate who has the vision, fortitude, and fight to pick up the reins of a broken state and help correct its course.

Kevin Kiley has chosen to take on that challenge, and the 200-plus who came out in 103-degree heat to officially launch his campaign is a testament to their belief that he is the man who can do it.

A lineup of speakers were in attendance, including Lead Proponent of Recall Gavin 2020, Mike Netter, who acted as master of ceremonies; Orrin Heatlie, Lead Voice of Recall Gavin 2020; Assemblyman James Gallagher (R-03); Freelance Journalist and anti-AB5 Activist Erica Sandberg; Tamika Hamilton who will be running as the District 3 Congressional Candidate in 2022; Founder of Reopen California Schools Jonathan Zachreson, and Pastor and Small Business Owner Matthew Oliver.

Each of these speakers not only represented the constituents of the State of California, and were the faces of why the Recall must happen, but they spoke to how Kevin Kiley has tirelessly worked for Californians of all stripes, and why he should be the next California Governor.

These individuals also spoke to the ground-level embrace of Kiley as a candidate. Kiley has traveled across the state and reached out to the disparate constituents throughout—something that many of the other candidates, including the ones that get mainstream press for free, have not done.

Freelance Journalist Erica Sandberg affirmed that she is a registered Democrat, but she stands with Kevin Kiley because,

“He fights for the rights of freelancers and independent contractors.”

“He openly defied powerful forces in the battle for AB5. While millions of people were losing their livelihoods through this law […] other politicians stood by and did nothing. Kiley was the only one who came out in full force.”

Having been a part of the fight against AB5 since December of 2019, I can attest to this fact. Kiley has not just talked the talk, he has walked the walk, and been the champion to over 4.5 million freelancers, self-employed, and independent professionals who have been decimated by this horrific law.

“So many people have been shut down, shut out—Kevin Kiley stood up for us,” Sandberg said.

Then Sandberg wisely pointed out how AB5 is being used as a model for the national PRO Act, and how the United States Congress is trying to implement the same draconian measures that have caused untold destruction in California on a national level. Sandberg warned,

“It needs to stop. With Kiley in office, he’s going to have our backs—all of ours.”

Assemblyman James Gallagher, who was co-plaintiff with Kevin Kiley to sue Gavin Newsom for his abuse of executive powers, introduced Kiley, as his “friend, and partner in Liberty.”

Kiley’s speech was concise, cogent, and direct. Unlike the word salad that spills from the mouth of Newsom, and that we are getting from many of the candidates being foisted on us, Kiley’s speech had a clear focus, a through line, and points that you could grab ahold of, and run with. Above all, the speech was highly inspirational.

My colleague and RedState Editor Kira Davis was at the rally, and affirmed that the energy was excited, and full of hope. Something she hasn’t seen in California in quite some time.

Kiley stepped up to the podium to rousing applause and cheers. He confirmed that,

“I stand before you, not so much as a candidate for office, but as one participant in an historic movement. And I mean historic in every sense.”

Local individuals to the state media mocked, marginalized, and maligned the Recall Gavin Newsom efforts, and said it couldn’t be done. Now, we stand here today: an election date on the books, and a host of candidates lining up to make a run.

Kiley explained why this historic moment was possible:

“A free people always has the power to make tomorrow better than today.”

Kiley’s speech focused primarily on “we the people”, the work done in getting a Recall election on the ballot, and also the work still yet to do to see California make a turn around.

Kiley mentioned the naysayers who told him that his campaign for governor is too bold. He pointed out the very low bar that existed in terms of not only legislative focus, but passion for the actual legislative process. Much of the California Legislature is merely there to rubber-stamp the concerns of special interests, and secure their re-election.

“In this Capitol, if boldness is a crime, I’m guilty as charged. Besides, I am standing on the shoulders of 2.1 million giants.”

Then Kiley laid out why Newsom must be recalled, and why the power of governance must be returned to the people.

“We can turn the page on this dark era, by rekindling the spark of Liberty and self-governance.”

“The most important role of the governor is to reduce who the government is in people’s lives, by returning power to local communities and individual citizens.”

He closed out the speech by saying,

To learn more about Kevin Kiley’s background, experience, this historic campaign, and to contribute, visit KileyforCalifornia.com.

Jennifer Oliver O’Connell (As the Girl Turns) is a contributor at Redstate and other publications. Jennifer writes on Politics and Pop Culture, with occasional detours into Reinvention, Yoga, and Food. You can read more about Jennifer’s world at her As the Girl Turns website. You can also follow her on Facebook, Twitter, and Telegram.