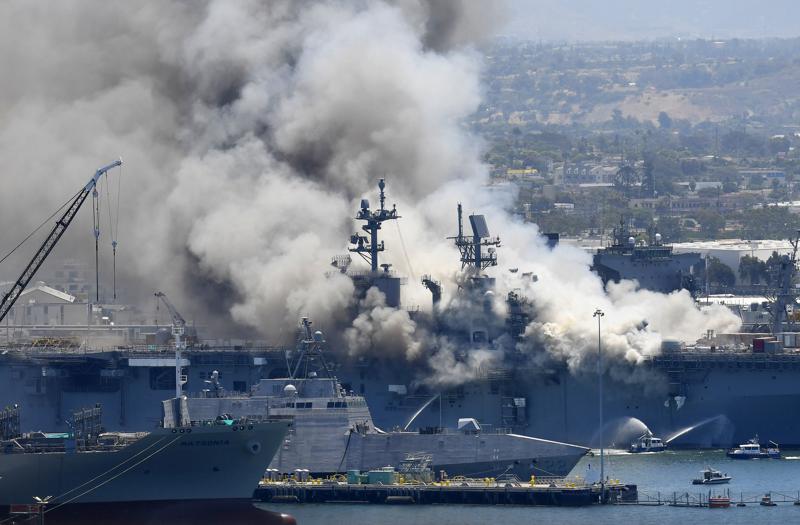 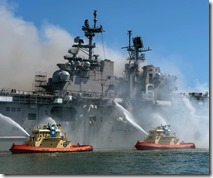 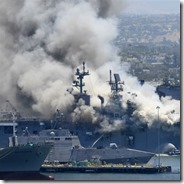 FILE – In this July 12, 2020, file photo, smoke rises from the USS Bonhomme Richard in San Diego after an explosion and fire on board the ship at Naval Base San Diego. The U.S. Navy said Thursday, July 29, 2021, that charges have been filed against a sailor who is accused of starting a fire last year that destroyed a warship docked off San Diego. The amphibious assault ship called the USS Bonhomme Richard burned for more than four days and was the Navy’s worst U.S. warship fire outside of combat in recent memory. (AP Photo/Denis Poroy, File)

The amphibious assault ship burned for more than four days. Left with extensive structural, electrical and mechanical damage, the ship was later scrapped. Estimates to replace it ran up to $4 billion.

The sailor was a member of the crew at the time, Cmdr. Sean Robertson, a U.S. 3rd Fleet spokesperson, said in a statement. The sailor was charged with aggravated arson and the willful hazarding of a vessel, Robertson said. No name was released.

No other details were provided, and it was unclear what evidence was found or what the motive was.

The amphibious assault ships are among the few in the U.S. fleet that can act as a mini aircraft carrier.

The Bonhomme Richard had been nearing the end of a two-year upgrade estimated to cost $250 million when the fire broke out on July 12, 2020.

About 160 sailors and officers were on board when the flames sent up a huge plume of dark smoke from the 840-foot (256-meter) vessel, which had been docked at Naval Base San Diego while undergoing the upgrade.

The fire started in the ship’s lower storage area, where cardboard boxes, rags and other maintenance supplies were stored. But winds coming off the San Diego Bay whipped up the flames and the flames spread up the elevator shafts and exhaust stacks.

Then two explosions — one heard as far as 13 miles (21 kilometers) away — caused it to grow even bigger.

Firefighters attacked the flames inside the ship, while firefighting vessels with water cannons directed streams of seawater into the ship and helicopters made water drops.

More than 60 sailors and civilians were treated for minor injuries, heat exhaustion and smoke inhalation.