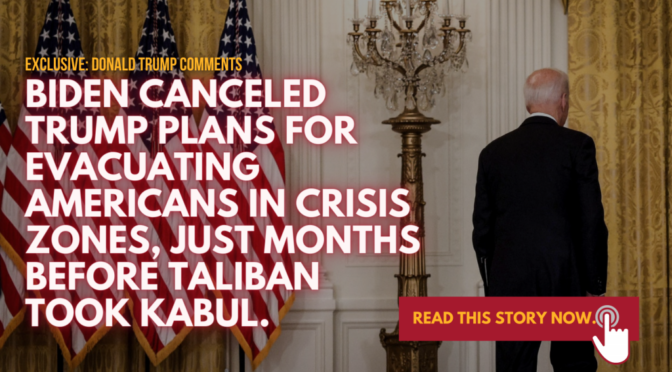 Joe Biden’s State Department moved to cancel a critical State Department program aimed at providing swift and safe evacuations of Americans out of crisis zones just months prior to the fall of Kabul, The National Pulse can exclusively reveal.

The “Contingency and Crisis Response Bureau” – which was designed to handle medical, diplomatic, and logistical support concerning Americans overseas was paused by Antony Blinken’s State Department earlier this year. Notification was officially signed just months before the Taliban’s takeover of Afghanistan.

“SENSITIVE BUT UNCLASSIFIED,” an official State Department document from the Biden State Department begins, before outlining the following move the quash the Trump-era funding for the new bureau.

The document is from the desk of Deputy Secretary of State Brian P. McKeon, confirmed in March by the United States Senate. 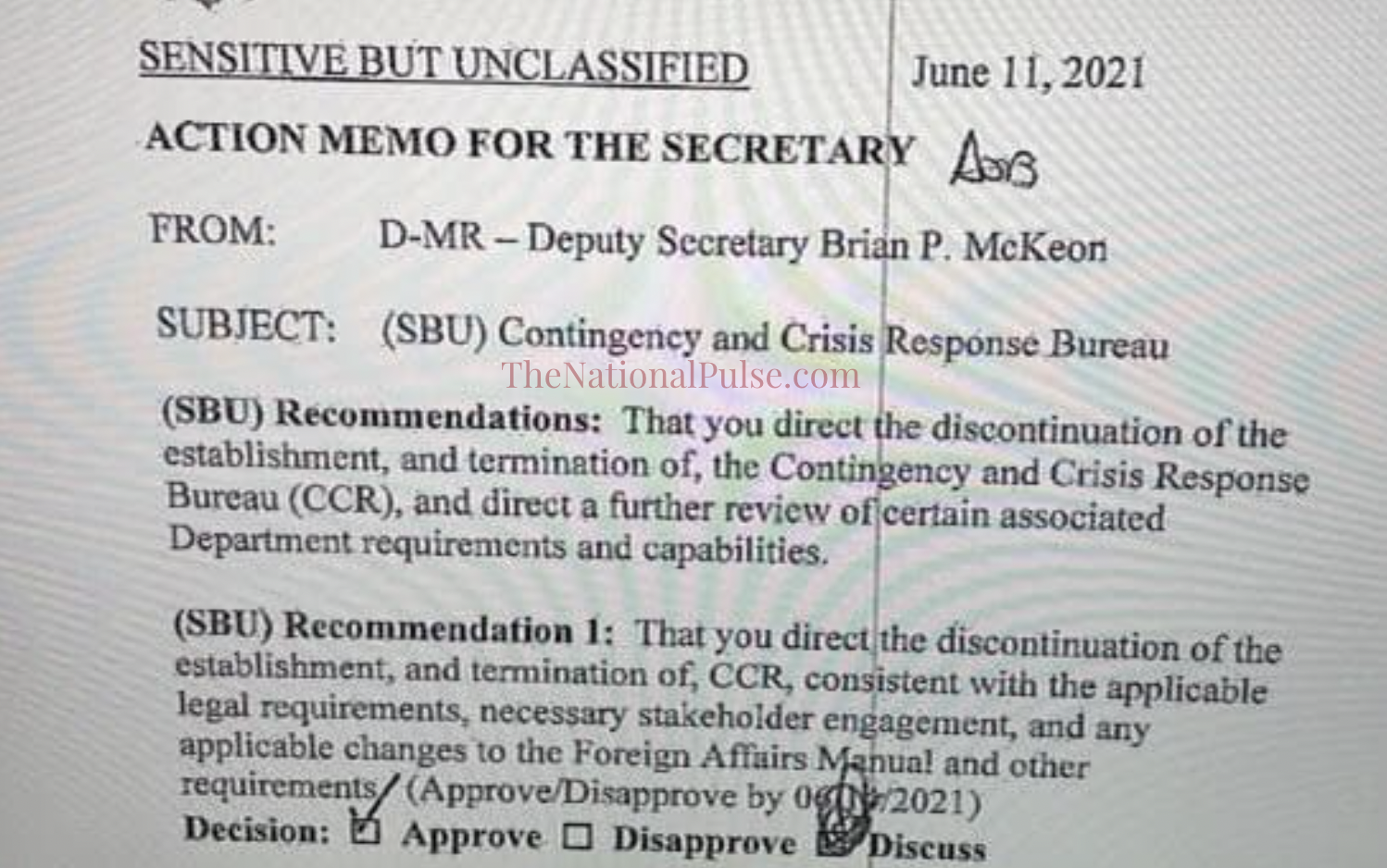 Evidence of the pause in the program by Biden’s State Department.

The document is dated June 11, 2021, though The National Pulse understands the decision to pause the program may have come as early as February, both undermining the original Trump-era date for the withdrawal of troops from Afghanistan, and certainly giving the Taliban time to threaten American assets and lives on the run up to Joe Biden’s September 11th date of withdrawal.

The subject line reads: “(SBU) Contingency and Crisis Response Bureau,” and the body of the document recommends:

“That you direct the discontinuation of the establishment, and termination of, the Contingency and Crisis Response Bureau (CCR), and direct a further review of certain associated Department requirements and capabilities.”

“That you direct the discontinuation of the establishment, and termination of, CCR, consistent with the applicable legal requirements, necessary stakeholder engagement, and any applicable changes to the Foreign Affairs Manual and other requirements.”

The document reveals the recommendations were approved on June 11th 2021.

“My Administration prioritized keeping Americans safe, Biden leaves them behind. Canceling this successful Trump Administration program before the withdrawal that would have helped tens of thousands Americans reach home is beyond disgraceful. Our withdrawal was conditions-based and perfect, it would have been flawlessly executed and nobody would have even known we left. The Biden execution and withdrawal is perhaps the greatest embarrassment to our Country in History, both as a military and humanitarian operation.”

MUST READ: Republicans Can Deliver a Knockout to Wobbly Biden – Will They?

In a lengthy article in Vanity Fair from May 2021, the Contingency and Crisis Response Bureau (CCR) – also referred to in overlap with a predecessor/partner bureau called “OpMed” is described as a “little-known team of medics and miracle workers—hidden deep within the U.S. Department of State.”

“Even before COVID reared its head, OpMed was finding ways to do all sorts of things, serving as the hidden hand behind daring and often dangerous operations to rescue Americans from peril abroad,” the article states, before going on to quote Secretary of State Tony Blinken on the importance of the program’s goals.

“The Bureau of Medical Services’ Directorate of Operation—or ‘OpMed,’ as we call it—is a lifeline for the Department of State and the American people… Though perhaps lesser known outside of the Department, it’s vital to our operations. That’s because OpMed provides the platform and personnel to save American lives around the world, especially in times of crisis. During the early stages of the coronavirus pandemic, OpMed was integral to our evacuation and repatriation of 100,000 Americans to the United States as countries began locking down their borders.”

But The National Pulse understands that career officials inside the State Department objected to the Trump-era aim of creating a Contingency and Crisis Response bureau with the express purpose of avoiding a future Benghazi-style situation for Americans overseas.

Instead, Biden’s team revoked the funding and the approval for the plan, even as the COVID-19 crisis reasserted itself, and and Afghanistan withdrawal loomed.

Vanity Fair reported in May:

“OpMed emerged from the ashes of Benghazi, where, on September 11, 2012, militants attacked the U.S. consulate, killing America’s ambassador to Libya, an information management officer, and two CIA contractors. The day’s events rocked the national security establishment and prompted years of recrimination, congressional hearings, and blue-ribbon commissions. When the dust more or less settled, several findings emerged: First, Pentagon officials had long warned their counterparts at the State Department about the “tyranny of distance” in Libya and other parts of North Africa. Second, CIA medics on the scene in Benghazi played an indispensable role in saving the lives of gravely wounded diplomatic security personnel. Finally, an interagency panel of experts concluded that, in light of the “grossly inadequate” response time to evacuate the injured from Benghazi, “State must ensure it has the capability to rapidly deploy crisis responders and evacuate […] personnel in harm’s way.”

“Responsibility for internalizing these lessons and bolstering the department’s ability to treat its own fell in no small part to William Walters, who had joined State in December 2011 in what for nine months had largely been a role in search of a mission: managing director of operational medicine. He had served with the Army’s most elite special operations unit and held the euphemistic title of deputy command surgeon for sensitive activities at the Joint Special Operations Command (JSOC). “They wanted a guy who understood the Pentagon but could also wear cuff links,” he said with a laugh, recalling the clash of cultures. And yet Doc Walters, as he is known in the corridors of Foggy Bottom, quickly emerged as a contrarian (in a department that values consensus) and an egalitarian (in an organization that’s been a bastion of elitism since 1789).”

A 2022 State Department Budget Justification document presented to the U.S. Congress earlier this year notes on page 22: “The Department has paused implementation of Op Med (CCR) pending a policy review.”

On August 15th, Biden’s State Department was forced to issue a humiliating statement warning U.S. citizens that the Embassy in Kabul would be unresponsive to their requests for help.

At the time of publication, Pentagon spokesperson John Kirby said the U.S. military is attempting to move 5,000 to 9,000 people to safety per day, according to the Associated Press.

The news flies in the face of Joe Biden’s claims that his government planned for “every contingency” in the war-torn country.

The National Pulse also understands no Congressional notification was sent to the United States Congress, as is required, upon the pause.