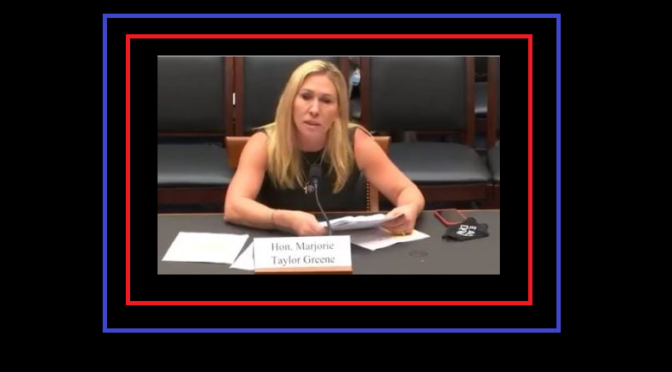 The following article, Marjorie Taylor Greene on J6 Defendants: “It Was Like They Were Prisoners Of War”, was first published on Big League Politics.

“Last night, I was greeted by men who never thought anyone would come see them,” Greene wrote in an online post couple with an excerpt of her speaking during the interview. It was like they were prisoners of war. They had lost hope and felt forgotten.”

Last night, I was greeted by men who never thought anyone would come see them.

It was like they were prisoners of war. They had lost hope and felt forgotten.

The American people must tell the federal government that we will not stand for their authoritarianism & their tyranny. pic.twitter.com/74qIXoVuFj

“What we saw in the jail last night is something that should not happen in our country…” Green began. “It wasn’t just the January 6th part of… the jail that was horrific, it was all of it. There were so many things wrong there.”

Taylor Greene then argued any American who considers themself a Christian should be horrified by the squalor conditions and that modern America has largely replaced traditional religion with one that worships the state.

The Congresswoman continued, hammering her point of a call to action.

“Loving one another isn’t sitting in church… [or] having a bible study where you’re sitting with the same people every week. Being a Christian means walking the walk and that means you need to show up… Go visit people in jail. They should never have to languish there. Demand to visit people like the January 6th defendants.”

Marjorie Taylor Greene said she was greeted by men in tears who had never expected any government official to come. Several also claimed that members of their own family had assumed they were dead. She also showed off a photograph given to her by a prisoner as a gift, as well as an American flag drawn by one of the prisoners.

“I’m calling on every American watching the show. Get up and get involved. I’m calling on you Christians, if you’re a Christian – GET UP!” Green passionately concluded.

“Now it’s time to save our country and we will do that by being the American people that we think that we are… by taking action and stopping the tyranny in America.”