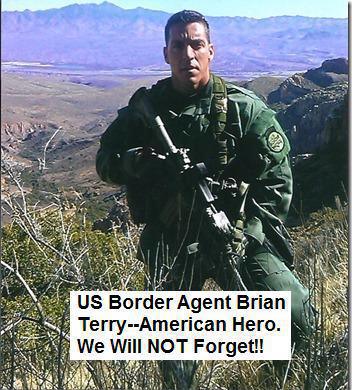 Source: Honoring Border Agent Brian Terry Killed In The Line Of Duty 12/14/10 | We the People Rising

11 Years Ago Today, Agent Brian Terry Was Killed In The Line Of Duty
On December 14, 2010, Agent Brian Terry was shot to death in the Arizona desert, while patrolling one of the region’s most dangerous drug and human smuggling corridors. He was actually looking for so-called ‘rip crews,’ who typically prey on those crossing into this country illegally.

Agent Terry encountered a group of those violent bandits, shots were exchanged and he was shot with an AK-47, the round ripped through his pelvis.

He was airlifted out of the area to the closest hospital, but soon succumbed to his wounds.

Of course, weapons which were allowed to cross the border, headed to the drug cartels, as part of the Obama administration’s Operation Fast and Furious were found at the murder scene.

In 2019 press release, the U.S. Attorney’s Office stated the following:

On February 12, 2019, a federal jury found that Osorio-Arellanes, 41, was part of an armed crew of bandits that murdered Agent Terry while they were attempting to rob drug smugglers transporting drugs from Mexico into the United States. Osorio-Arellanes was convicted of nine counts, including first degree murder, second degree murder, conspiracy to commit robbery, attempted robbery, assault on four Border Patrol Agents and carrying a firearm during a crime of violence. Osorio-Arellanes is the sixth of seven defendants in this case to be convicted and sentenced to date.

Shortly after he was killed, his stepmother, Carol Terry spoke of her stepson’s relationship with his devastated father:

Brian just loved his dad. He would do absolutely anything for him. And Brian was his dad’s hero. Every time Brian went out on a mission he would call his dad to tell him he was leaving. Then, when he returned from each mission, he would call his dad to let him know that he was back. So we knew Brian had gone out on a mission Tuesday evening. That was the last time we ever heard from him.
What really hurts so much is that he died protecting illegal immigrants, she continued.

Terry was a former Marine and served as a police officer in Lincoln Park, Michigan. He had been a Border Patrol agent for three years. In his continued quest for a lifetime of service to this nation, he had plans to become a Secret Service agent.

It was his life. He said it was very dangerous, but he loved what he did and wanted to make a difference.
Please take a moment today to remember this real-life action hero, who regularly put his life on the line for others.

And, to Agent Brian Terry’s grieving family…We will never forget him! 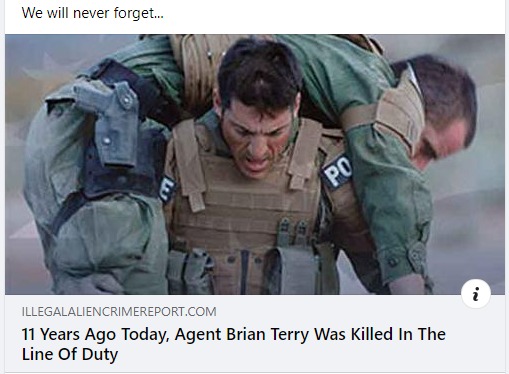