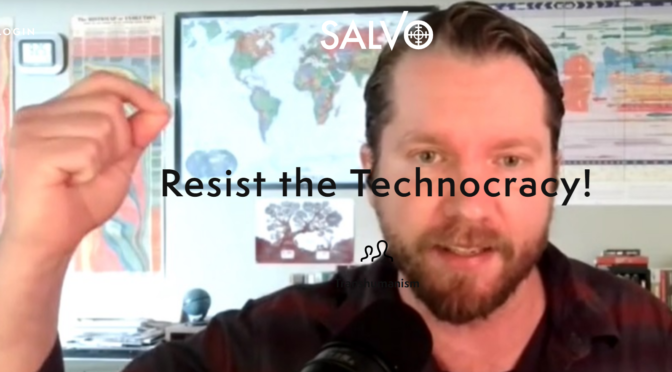 Salvo‘s Joe Allen and Steve Bannon hit Elon Musk pretty hard in two recent broadcasts at Bannon’s “War Room.” In the broadcasts, which aired on the 1st and 4th of this month, Allen characterized Musk as a Trojan Tesla with an army of robots hiding inside.

Before dismissing this a mere fearmongering, consider…

Men of vision have enormous impacts on civilizations, and our man Musk envisions a world supported by an automated workforce, universal autonomous vehicles, a humanoid robot slave class, a god-like AI that will threaten humanity, an implantable brain chip that will protect us from it, and a civilizational escape hatch to Mars.

It’s hard to believe any person would think these are ideal ways of life, sound philosophies, or prescriptions for human flourishing, but young tech bros and grifters looking for Musk bucks can’t get enough.

For details, see these two editions of the “War Room”:

In a more recent episode that aired last Friday, Bannon and Allen discussed Allen’s recent Salvo article, “Killing Us Softly: Klaus Schwab’s “Great Narrative” For The Global Borg,” where Allen explains how the founder and chairman of the World Economic Forum sees COVID-19 as an “opportunity” to accelerate the “convergence of the physical, digital and biological worlds.”

Joe Allen is Salvo‘s front man on the scene covering this envisioned technocracy so that we can be better informed about what’s being foisted on us unawares and how we can resist getting swept up in it. If you’re interested in learning more about it, look for him at the following conferences this spring:

* Salvo does not necessarily endorse the content of these conferences. We mention them simply as an opportunity for readers who may be interested in hearing and meeting Joe Allen.