People familiar with the matter said FAW, one of China’s biggest automobile conglomerates, is in early talks with Didi’s top executives, pledging support to the company to fix data security issues that have angered Beijing, which, if corrected, would ultimately pave the way for a Hong King listing. Talks are early and may not pan out to anything, the people added.

Shares of Didi are up 8% premarket in New York after Bloomberg’s report.

Didi Plunges Below IPO Price as China Cracks Down on Tech

Didi Said to File Confidentially for IPO in U.S. 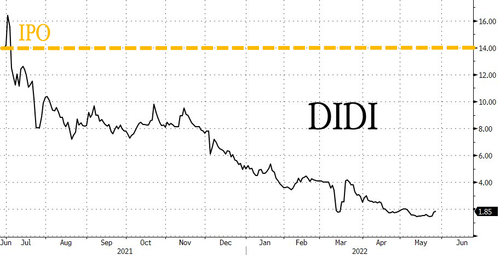 Didi shares have crashed 87% from its IPO offering price of $14 through Thursday’s close and are down 63% YTD. In June of last year, Chinese cybersecurity regulators asked the company to sideline the IPO while regulators reviewed its data practice — that didn’t happen, and China unleashed a massive technology crackdown on the company over the past year.

This week, shareholders of Didi approved a plan to delist from the New York Stock Exchange, concluding an 11-month regulatory mess.

Talks are still premature, and it remains to be seen if FAW will purchase a stake. If so, the country’s most important state-backed corporation could help the troubled ride-hailing company regain good status with Chinese regulators and pave the way toward a Hong Kong listing.